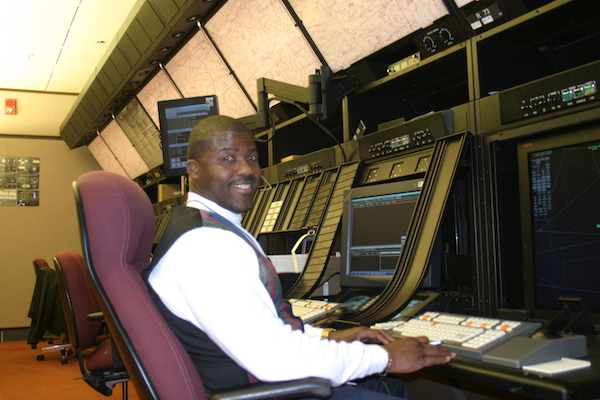 A version of this article is being jointly published by the FAA.

If you heard it was “Marvin Sutton Day” you might ask, “Marvin who?”

But at Fort Worth Center, no one has to ask. Marvin Sutton, a 27-year controller, is well known throughout the facility for his tireless community work and the professional approach he takes to doing his job.

Sutton’s managers and coworkers, as well as several visiting local dignitaries, recently gathered at the center to celebrate “Marvin Sutton Day,” where he was presented with a 35-year pin to commemorate his service to this country through the U.S. Air Force and FAA.

“Fort Worth Center appreciates Marvin’s dedication as an air traffic controller, his passion for excellence, and his tireless work in several areas of public service,” said Mike McDonald, operational manager at the center. “He is one of the most reasonable and even-tempered individuals that you will ever meet.”

Sutton’s commitment to country and community goes back beyond his FAA career and his eight-year stint as an air traffic controller in the U.S. Air Force, to his formative years as a child growing up in housing projects and on welfare in rural Georgia.

Sutton remembers and mentally carries with him a Bible saying: “To whom much is given, much is required.” He recalls with appreciation the help he received from neighbors who were willing to lend a hand. He noted his participation in programs like Head Start, which promotes school readiness for disadvantaged children under five years of age through education, health, social, and other services. He remembers the good role models he had and the message they imparted to him: “This is not your life. This is what you’re dealt with, but it doesn’t have to be that way.”

“Having to endure an economically disadvantaged situation made me want to give more back,” said Sutton.

It’s hard to imagine how much more a dedicated father of four can return to a community. Sutton started a watch program when crime was on an uptick in his Arlington, Texas neighborhood. Fights fueled by students at a local high school spurred Sutton to action. His efforts led to a program in which people were encouraged to knock on the doors of their neighbors and work with 911 to keep the police and community informed of problems.

But Sutton wanted to do something more constructive. He challenged school administrators, students, law enforcement, and his neighbors to change a negative climate into a positive one.

On other occasions, his community service is more personal. He learned that the school board was cutting back on mowing lawns because of budget shortfalls, including at his neighborhood elementary school.

“I went there and I decided I was going to cut the grass,” he recalled. “I asked, ‘Do you mind if I cut the grass?’” The surprised school principal readily agreed and three hours later, the elementary school lawn was cut. His reward was a list of thank-you letters from fifth graders for his efforts.

He’s also has arranged “umbrella” coverage for the younger students. On rainy days, he meets each child as their parents drop them off and escorts them under an umbrella into the school. It took almost an hour but it was well worth it to Sutton.

Sutton is getting even busier this election year. Four times he has run as a non-partisan candidate for city council. Now, he is a presiding election judge for his district. He also goes to classrooms to lecture about voting rights and the Constitution, and shows children what a voting device looks like and even helps eligible high school students to register to vote.

It’s important for children to understand that voting “is the way that we transfer power and we make decisions in our community and convey that to students,” he offered. That includes his kids of course. He makes sure that his children from a young age accompany him to the voting booth to witness and learn about one of the greatest rights and responsibilities of an American.

There is synergy as well between his community service and his job as a controller. He attends career days at schools to educate them about air traffic control and that what they learn in school will contribute to their future. He also tutors for free.

“Federal Employees dedicate their talents and career to serving the public,” says ZFW FacRep Nick Daniels. “Marvin exemplifies this commitment to NATCA, the FAA, and the community. His selfless attitude is inspiring and deeply appreciated.”

Communication within his community has earned him deserved recognition, so it shouldn’t be surprising that it’s his ability to communicate effectively upon which his professional credentials rest.

“It’s the sum of what I do at work,” Sutton said, breaking down communication as a controller into the areas of aircraft separation, safety alerts, and additional services. “Whether it’s a social environment or not, whether it’s with students, in the political world, or with controllers, what I have to do is communicate effectively.”

The other key to his success as a controller, he said, is being a professional. “When I came on board, the standards were a little bit different, but being a professional is what I impart.” And what that means, said Sutton, “is doing the right thing every single time regardless of who’s watching.”

“His everyday actions and demeanor speak loudly to the younger controllers, as well as the tenured controllers that are at the center,” McDonald said.

Sutton also “imparts” something more concrete to those of his co-workers who have served in the military. Last Memorial and Veterans Days he purchased, out-of-pocket, 250 baseball caps for his fellow controllers, technicians, and other FAA employees to show his appreciation for their military service to this country. It was expensive, but it was well worth it in Sutton’s mind. “I thought it was worthy enough for people who made the ultimate sacrifice and people willing to make that ultimate sacrifice,” he explained.

“Marvin is a model of professionalism,” says ZFW RDR Area Rep. Troy Thompson. “Whether he’s representing NATCA or the FAA, He has a desire to help and lead others at ZFW and in the community. His actions define “Servant Leadership” and we feel fortunate to have him as part of our work family.”

Despite his community work and full-time job, somehow Sutton has managed to prepare for his eventual retirement as a controller in two-and-a-half years by earning a Bachelors degree in accounting, with honors, and passing the exam as a certified public accountant. In the process, he received the highest honor bestowed on business majors by being accepted into Beta Gamma Sigma.

But the celebration of “Marvin Sutton Day” at Fort Worth Center might be his biggest honor.

“I was speechless,” Sutton said upon learning of the honor, probably one of the few times in his life he could not communicate effectively.

“I am really grateful and appreciative for the continued support I’ve received from the FAA and the National Air Traffic Controllers Association in my long-term career development,” he added. “A lot of people don’t know what I do out in the community.”

And now they do.