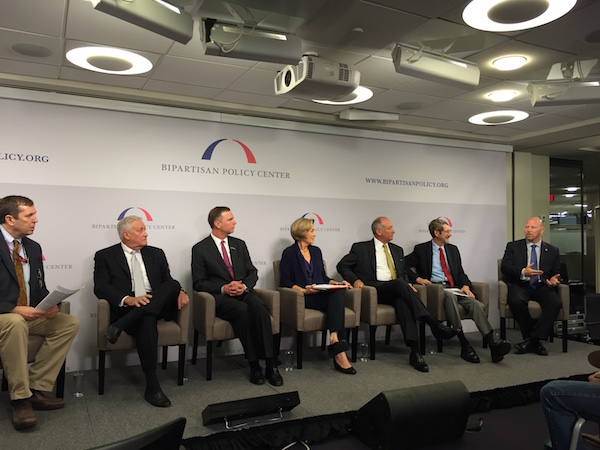 May 13, 2016 // Rinaldi Speaks on Modernization of the Air Traffic Control System

Overview:
On May 13, NATCA President Paul Rinaldi took part in a Bipartisan Policy Center panel, entitled “Modernizing Our Air Traffic Control System: What’s the Holdup?” As Congress debates reauthorization of the Federal Aviation Administration (FAA), the issue of whether and how to reform our air traffic control system is at an impasse. The U.S. air traffic control system still runs on decades-old technology, yet efforts to update it have limped forward. While travel delays and safety concerns are mounting, structural and funding issues, as well as varied stakeholder interests are all impacting steps toward modernization.

Congress itself has contributed to this standstill by implementing sequestration and creating ongoing funding uncertainties that have threatened the FAA’s ability to deploy new technologies. Stable, predictable funding must be achieved in order to modernize the air traffic control system.

Barclay started off the panel by pointing out that the air traffic control system is a 24/7, high-tech, capital intensive production line of a major commercial industry. The air transportation system includes manufacturers, airlines, corporate flight departments, FBOs (fixed-base operators), and airports. He said all of them have access to capital financing except the system of air traffic control. He emphasized that big, complex production lines need a board of governors that are focused on its operation and are empowered to provide it resources.

“What you don’t need for a big, complex production line is 535 board members (Congress), all of whom have hundreds of issues more important to them than the running of your production line, and in fact, disagreements about other erroneous issues that can trickle down and effect your operation,” he said.

Robyn, who served under President Clinton’s Administration, explained that the President’s first trip outside of Washington, D.C. was to a Boeing facility to learn how to strengthen the health of the airline industry.

“The recommendation that came out of this was to spin-off the air traffic portion of the FAA as a government corporation,” she said. “USATS (United States Air Traffic Services, Inc.) would have been user-funded, overseen by a board with the ability to go to capital markets, and premised on exactly the rationale that this is a 24/7 production line that is not inherently governmental.”

According to Robyn, USATS was dead on arrival on Capital Hill in the 1990s, but she said it illuminates just how long the idea of the aviation system transitioning to a non-for-profit government corporation has been debated in Congress. This debate grows increasingly important as technology continues to progress at a rate the FAA cannot keep up with, due to its broken procurement process, something Rinaldi pointed out.

“Space Based Automatic Dependent Surveillance-Broadcast (ADS-B) is launching satellites to give us world coverage of ADS-B, and NavCanada has partnered with them to do this because they have stable funding and the ability to be dynamic and think forward,” Rinaldi said.

He continued with the example of the antiquated technology the U.S. uses to provide oceanic air traffic control services.

“If we are not able to provide the best service, nobody is going to allow the U.S. to keep that airspace and it will be delegated to someone who can do a safer, more efficient service,” he stressed.

As users, it is important to go to Congress and demand to be a part of these new technologies. Rinaldi said the U.S. is “ being strangled” as other countries adapt more quickly. In fact, Aerion, a U.S. company, approached the FAA with plans for ADS-B first. The FAA, however, was institutionally incapable of taking it on, due to no funding source and its inability to get involved with private corporations, and had to pass up the chance to be the world leader in this new technology.

“When you look at what we’ve gone through the past ten years, it’s unstable, unpredictable budgets,” said Rinaldi. “The current administration has been working very collaboratively with us and we have made some advancements of technologies within our system, which is good, but the antiquated WWII technology is phasing out and we’re just bringing in the 1990s technology. It takes that long to go through the procurement process.”

Another issue in the NAS modernization debacle revolves around developing new technology. By the time air traffic controllers get involved, it’s often after the technology has been developed and studied. Controllers quickly realize that the technology does not suit their needs to run the most efficient operation. The development company then has to rebid on the technology or go into a cost overrun situation, which further delays the project. The NAS needs stable funding so the air traffic control system can more efficiently develop new technologies, something in which NavCanada has seen success.

“Canada has a collaborative relationship between controllers and technicians to develop new systems, meaning their capital spending is lower per year than what the government was spending,” Poole commented.

The prospect of change isn’t a positive thing for everyone. Bolen wants to identify how to ensure the public airspace is run in the best interest of the public.

“This is a monopoly, so who is going to control the monopoly and who will they control it for?” he said.

Hendricks added that all stakeholders are in the same boat of being frustrated by the slow pace of FAA modernization. He explained that his group does not support the current reform legislation because the U.S. has the best system in the world and the general aviation community worries over time they will see a reduced emphasis on their importance.

“We’ve got a great system, all is not broken here, let’s just be very thoughtful and methodical moving forward,” he said.

Barclay acknowledged that there can be risk in change, but sometimes there is bigger risk in not changing.

Rinaldi pointed out that, “Now is not the time for complacency. It is important to look at what has happened in the last five-to-10 years and learn how best to move forward,” emphasizing his long-standing theme that good is the enemy of great.

Rinaldi used ERAM as a prime example of this need. Under the current procurement process, it took close to 15 years to deploy and was almost $1 billion over budget. In 2010, it was dead on arrival. It didn’t do what it was supposed to do because air traffic controllers weren’t involved at the conceptual stages. It took five years to roll it out and even though it’s now deployed, there are many adjustments that need to be made with no money available to fix it. Leaving this “brand new,” 15-year-old system, unfinished.

“As aviation continues to grow, we want our system to continue to be the largest, safest, and most diverse in the world, but if we can’t adapt to modern technology when NavCanada to the north is or the U.K. is, we are going to lose that position,” Rinaldi said. “We should build the best system we can with a stable, predictable funding stream so we can modernize our system and continue to have aviation be an economic engine in this country.”

“We’re at a 27-year low of Certified Professional Controllers (CPCs),” Rinaldi said. “To give you perspective, President Reagan fired about 11,500 CPCs in 1981. Currently, I have 10,500 controllers certified to work the system.”

He continued to explain, “Of those 10,500 controllers, about 3,000 are eligible to retire. We are in a staffing crisis.”

Current air traffic control reform legislation has faced a lot of criticism, with opponents saying that it is a union giveaway, allowing members to strike at will. Rinaldi said that this is simply not true. The bill merely protects the current rights of air traffic controllers, giving them the mediation and binding arbitration to finality they have today.

Rinaldi closed by emphasizing NATCA’s mission, to seek a fair and equal shot at the table to do fair, binding arbitration negotiations.

View more photos and video from the event.