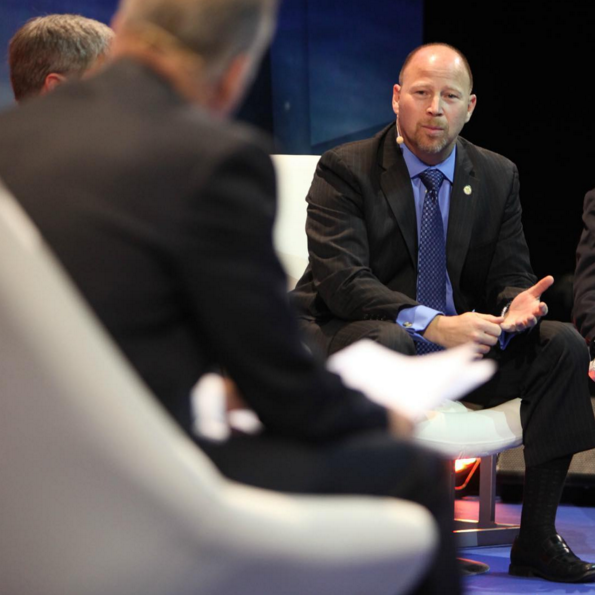 The Air Traffic Control Association (ATCA) announced this week (May 20, 2016) that NATCA President Paul Rinaldi has been selected as the 2016 recipient of the prestigious Glen A. Gilbert Memorial Award, one of the most significant awards in aviation and ATCA’s highest honor.

The Glen A. Gilbert Memorial Award is dedicated to the memory of one of the “Fathers of Air Traffic Control” and honors the lifelong achievements of an individual in the field of aviation. Glen Gilbert was a visionary who, along with Earl Ward, founded the U.S. air traffic system and dedicated his professional career to its improvement.

Rinaldi will receive the award at the annual Glen A. Gilbert Memorial Award banquet on Oct. 19 in National Harbor, Md., at the 61st ATCA Annual Conference and Exhibition.

Rinaldi received a phone call Wednesday afternoon, May 18, from ATCA President Pete Dumont, who told him he had won.

“I was shocked,” Rinaldi said. “He said it was a unanimous decision of the board. I really feel honored and humbled.”

Rinaldi said the award is a great acknowledgement of the work of NATCA as a whole.

“I am so excited for our organization that our hard work is being recognized throughout the industry,” he said.

NATCA Executive Vice President Trish Gilbert said the award for Paul, “validates and recognizes the great work of the safety professionals that he represents, and of the National Air Traffic Controllers Association. The work of our members to keep the system safe and efficient is significant. It’s truly special to be honored in our industry in this way, to have the recognition that what we are doing is important and it’s making a difference.”

ATCA wrote in its announcement of the award:

“As the president of the National Air Traffic Controllers Association (NATCA), the federal labor union representing aviation safety professionals at the FAA, DoD, and within contract towers, Mr. Rinaldi has displayed an exemplary career-long commitment to the betterment of the National Airspace System. In accepting the Glen A. Gilbert Memorial Award, Mr. Rinaldi joins aviation greats, including the Hon. Jane Garvey and the Hon. Najeeb Halaby, Capt. Elrey B. Jeppesen, former Transportation Secretary Norman Mineta, and pilot A. Scott Crossfield.”

The list of winners now includes Rinaldi’s name, something he said is overwhelming and for which he is deeply honored.

“I can’t even process it, that my name will be there,” he said. “This is validation of a great many activists in our Union who are working day in and day out. It’s also a testament to Trish Gilbert and to our National Executive Board. The vision we have had is moving forward and becoming a different kind of union. We have worked to protect the National Airspace System, modernize the system, and ensure that the people running the system are taken care of too.”

Gilbert also noted the significance of Rinaldi’s name joining the list of past award winners.

“To be on this list and now be compared to these names of the most notable and influential people in our industry’s history is really such a big deal and so great!” she said.

The design of the award includes the Roman God Jupiter, deity of weather, sky, and light; and a depiction of the earth and its atmosphere. It is inscribed with recipient names and was donated by ATCA Corporate Member, Raytheon Company. The Glen A. Gilbert Memorial Award is on permanent display in the Smithsonian’s National Air & Space Museum in Washington, D.C. ATCA said the trophy underwent a complete restoration in 2005 thanks to a generous donation by the Raytheon Company.

For more information about the Glen. A Gilbert Memorial Award, please click here.

This award announcement marks the second prestigious honor for Rinaldi this year. On May 26, Rinaldi will receive the 2016 Humanitarian Award from the Sons of Italy Foundation (SIF) at its National Education & Leadership Awards (NELA) Gala in Washington, D.C. The SIF is the philanthropic arm of the Sons of Italy, the nation’s largest and oldest organization for people of Italian heritage. The philanthropic arm of the Order Sons of Italy in America® (OSIA), the SIF, has contributed $164 million to education, medical research, disaster relief, cultural preservation, and other special projects, with $61 million of it given to scholarships. NELA Gala proceeds help fund these philanthropic programs.

For more information about the NELA Gala and this year’s award winners, please click here.

The NATCA Insider will provide full coverage of the NELA Gala in our May 27 issue.