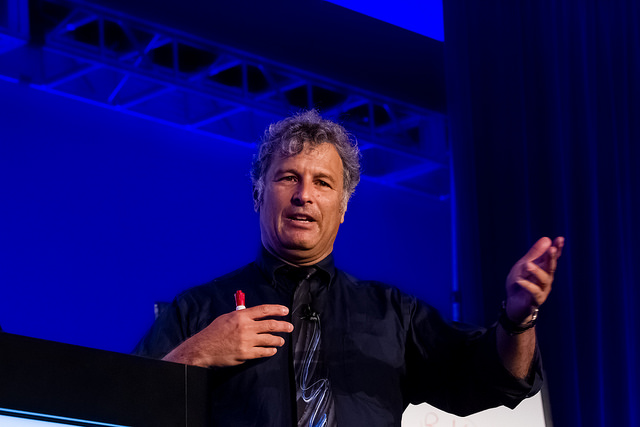 American University Professor of Communication Leonard Steinhorn captivated the audience at NATCA in Washington with his immense knowledge of American politics and the emotional connections that dictate political beliefs. His discussion centered on questions asked by those in attendance. He addressed what Republican and Democratic voter bases want, facts versus emotions within politics, the state of the current presidential race and how it is reflected in the polls, super delegates, primaries, and the current state of America’s political parties.

Steinhorn explained how powerful narratives shape political beliefs. Candidates today seek an emotional connection with their voter base. To do this, they must masterfully convey ideological narratives that appeal to the largest majority of that base.

“There is a fundamental distinction between the parties,” Steinhorn said. “Both resist power. Republicans believe government holds too much power. Democrats think Wall Street and special interest groups hold too much power.”

He described that, based on these differing interests, political narratives begin to form, blurring the line between facts and emotions. For example, he spoke about the popularity of Republican presidential nominee Donald Trump, who has made outrageous statements throughout his campaign that would have sunk other candidates’ political careers forever. Steinhorn said what makes Trump different boils down to the reinforcement of ideas, and the emotional tie voters have to their individual interpretation of one of America’s deepest-rooted ideals, the American Dream.

“Republicans believe that if you work hard, you will succeed,” Steinhorn said. “Therefore, if you don’t succeed, you didn’t work hard. To them, if government gets involved through aid programs, it leaves a population wondering, ‘I worked hard for my money, why give my tax dollars to people who didn’t?’”

He explained that the Democratic Party believes that there are historical and socioeconomic circumstances beyond control that dictate an individual’s level of success. Therefore, government is a necessary check on the excesses of the free market, including a ladder and safety net so no one falls too far. These two different interpretations of the American Dream often dictate the party that a voter supports.

Steinhorn attributed Trump’s success to his “masterful” ability to weave the narrative “Make America Great Again.” The core base of Trump supporters is white, working class Americans — many of whom do not have a college education. He described how they feel America is falling behind and is no longer great because it no longer reflects what they perceive America to be. Trump is articulating a narrative to people who see themselves as the backbone of society and have seen their own status decline. Steinhorn explained they perceive they must reclaim that status from people who are rising in society.

“A lot of emotion gets built into things when you have certain core assumptions and then rationalize them through argument and fact,” Steinhorn said. “That’s where politics come from. Trump’s outrageous comments become less important because he is reinforcing the voter’s beliefs about society.”

When you look at the polls today, it is important to remember the Republican Party has chosen a candidate and is rallying around Trump because it views him as the best option when compared to Democratic front-runner Hillary Clinton. Steinhorn advised that current polls are not reflective of what will actually happen. He explained that Bernie Sanders winning many primaries has left his supporters feeling as if they are not receiving proper acknowledgment from the press, superdelegates, or the Democratic Party.

“A great unifier in politics is often not your own party’s candidate, but it’s the candidate in the other party who you find far more troubling to be able to get in the White House,” Steinhorn said. 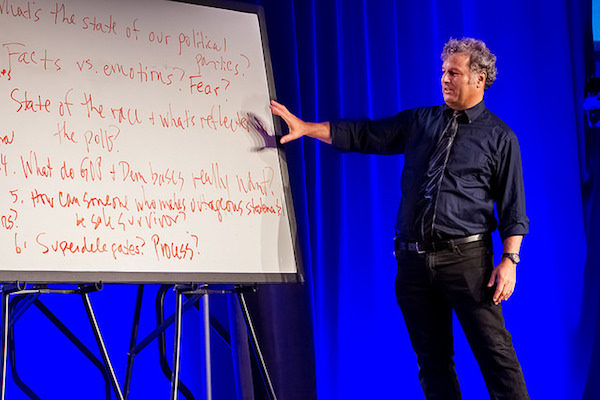 While Steinhorn also discussed superdelegates and the roll of primaries within the American political arena, he left the audience a task: to communicate the facts and come to rational consensus between parties.

“How do you communicate to strong emotional bonds, even if you have facts on your side?” he posed. “I don’t know the answer.”

He explained that people assume they won’t be respected, so they become aggressive at first when debating political ideas. Part of participating in the political process is the willingness to understand your opponent because politics is such an emotional medium.

He said, “You must show people respect if you want to get through to them and have a conversation that will enrich and not harm our democracy.”

Leonard Steinhorn is a professor of Communication and an affiliate professor of History at American University. His expertise includes American politics, culture and media; strategic communication; the presidency; race relations; the 1960s; and recent American history. He is the author of The Greater Generation: In Defense of the Baby Boom Legacy, and co-author of By the Color of Our Skin: The Illusion of Integration and the Reality of Race. Steinhorn has written for the Washington Post, Salon, New York Times, Politico, Huffington Post, The Hill, The World Financial Review, and History News Network, among others, and he is the founding editor of PunditWire, where political speechwriters comment on the news. Steinhorn is currently a political analyst for CBS News on radio, and before that he served 10 years as political analyst for FOX-5 News in Washington, D.C. Steinhorn was an on-air expert in CNN’s documentary, The Sixties, and he appeared in a DVD special feature on the Sixties generation for the final season of AMC’s Mad Men. He lectures nationwide on politics and history for One Day University.