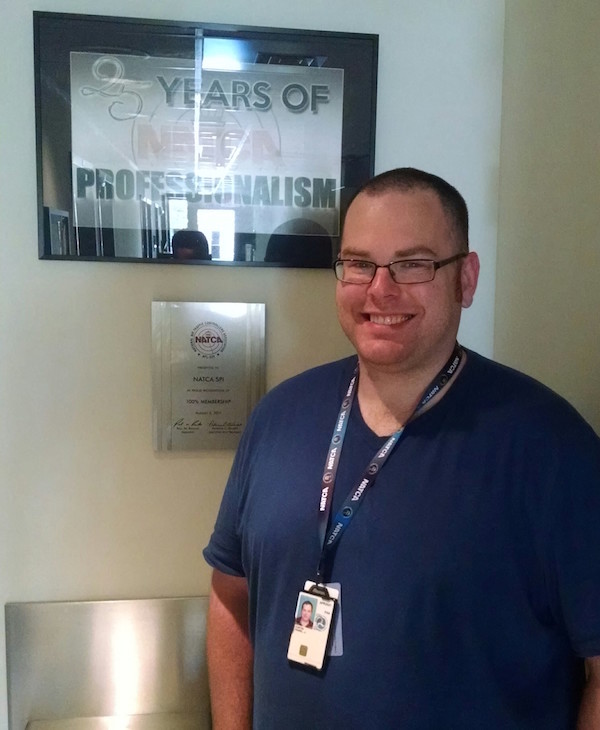 Born and raised, other places of living:
Born: I was born in Washington, D.C.
Raised: On the right side of the Potomac, aka Maryland 🙂

Family: One of four children.

Q: How did you become a NATCA member?
A: I joined within a couple of weeks of walking through the door at Springfield Capital ATCT (SPI).

Q: Do you have any family members who were involved in unions?
A: Not that I’m aware of.

Q: How did you get involved and what are you involved in with NATCA?
A: I was at a Union meeting within a few months of joining NATCA and Great Lakes Regional Vice President Bryan Zilonis was also there, visiting our local. I asked a question about a national issue and before he answered he turned to our FacRep and told him to get me more involved. I became the Professional Standards Rep a little later and then moved onto being the FacRep.

Q: What made you decide to take on leadership roles within NATCA?
A: Pretty much the story above – I’ve received a lot of support from Bryan and Great Lakes Region Alternate Vice President Jeff Richards in the meantime too. They’re great guys and I hope I can serve the Union in the future as well as they do now.

Q: What was the most rewarding part of being facility president? What’s the most challenging?
A: I recently stepped aside in April but I would have to say that is the hardest thing I’ve had to do — just taking survey of all the things I still wanted to accomplish. It made it easier that I had a very capable guy to hand the local to in Steven Hawkins (yes that’s really his name) and he has done a great job.

The most rewarding thing for me has just been seeing us go from a facility where everyone was on six-day workweeks to being almost healthy. We haven’t quite gotten it all the way turned around, but through the dedication of the people at SPI — both the on the job trainers and the trainees — we’ve managed to get it back to a point where we can actually get together after work on occasion and get training accomplished without killing ourselves.

Q: Out of all your involvement within NATCA, what speaks to you the most?
A: I actually really like writing orders and MOUs (memorandums of understanding) and I love mid-term bargaining.

Q: Do you have any hobbies or any other activities you enjoy outside of NATCA?
A: I do a bit of gaming and cycling and a lot of reading. I probably have three or four books open at a time.

Q: Has there been a favorite moment for you while at NATCA?
A: Attending LEAP (leadership experience acceleration project) class. They kicked my butt pretty good, but there’s something to be said for being surrounded by great people who believe in the Union and approach things from very different angles than I do. I learned a lot.

Q: Do you have any advice/tips/messages for members who would like to get involved?
A: Talk to your Union Rep and let them know you want to help out. There are lots of different things to be done and a lot of them are fun. You are needed.

My favorite comfort food is: Pizza
The strangest food I have ever eaten is: Puffer Fish Hot Pot
Dogs or cats? Dogs