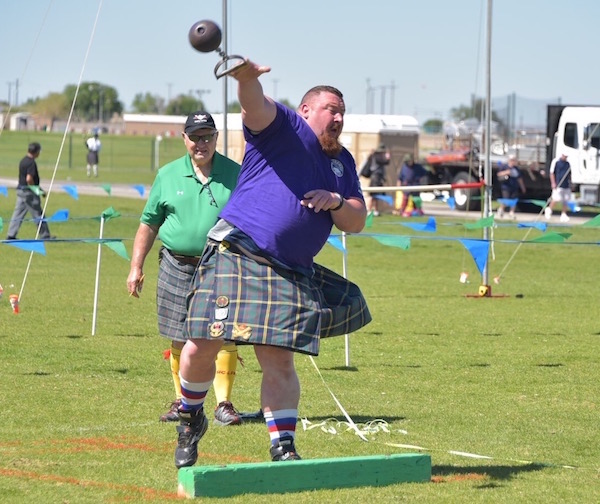 Fort Worth Center (ZFW) controller Jeffrey Duer recently competed at the Highland Scottish Games League (SGL) Amateur National Championship in Albuqueque on May 21 where he took home the honor of being the United States Amateur Champion! The competitors were regional champions representing the 12 regions of the SGL from all over the country.

Duer is a previous Area Rep and current member on the ZFW Local Safety Council (LSC). He is a former U.S. Marine and is proud to sport both that insignia and a NATCA patch on his kilt when competing.

“Jeff represents NATCA in the highest regard and we are extremely proud of him,” says ZFW FacRep Nick Daniels.

The two height events that take place during competition are Sheaf Toss: a burlap bag that weighs 20 pounds and is filled with straw or hay, then thrown off a pitch fork over a bar; and Weight Over Bar: a weight that is 56 pounds that is thrown over a bar one handed.

Caber, the embodiment of the Highland Games and the fan favorite according to Duer, is an event in which competitors toss a tree trunk 16-to-20 feet long and weighing between 100-to-140 pounds. The event is judged by how the trunk passes through the vertical position, straight up and down. 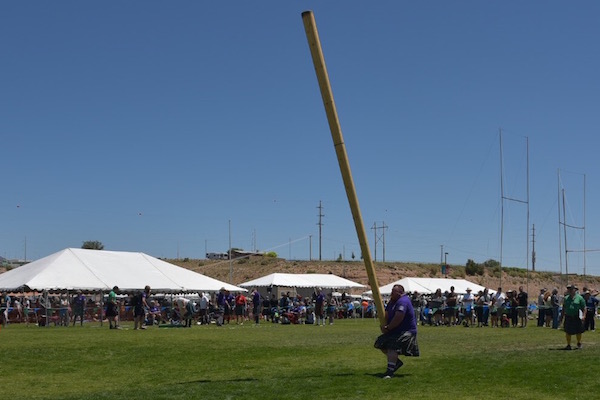 This was the first national event Duer has taken part in and the first one outside of Texas. He has competed in about 10 events over the past three years.

“The competition and people are what keep me coming back,” he says. “I am a competitive person by nature and love to push myself. No matter how far my last throw was I always feel I can improve.”

Duer also emphasizes the camaraderie he feels at the games is the same as on the control room floor. He says that even though you are competing against one another, you end up rooting for the other guys as well, and the wise cracks don’t stop. 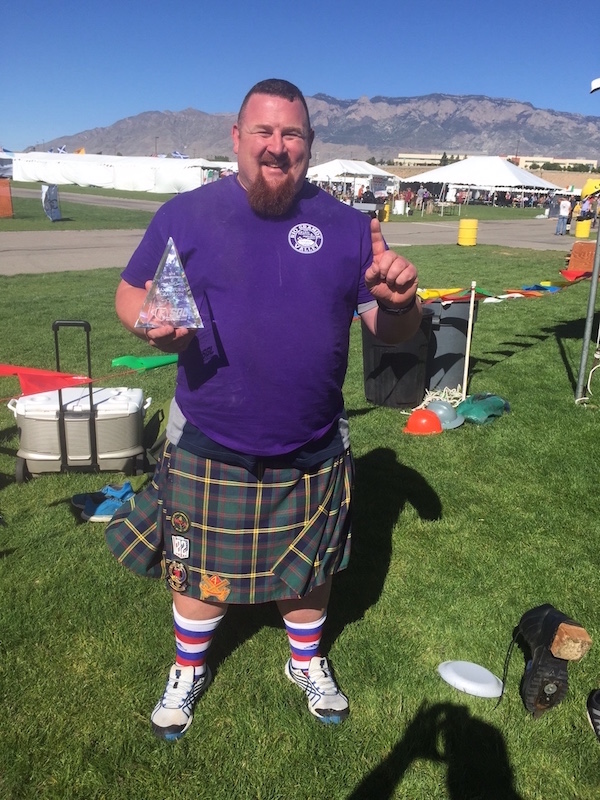 Despite being a former Marine, there are not many things that can prepare an athlete for the athletic feats seen in the Highland Games except perhaps a natural propensity for carrying and lifting heavy loads.

“I have never had the typical Marine body type,” Duer explains. “The Marine Corps PFT, three-mile run, pull-ups, and sit-ups, were always a struggle for me but I found a way to pass. When it came time to load the gear, carry the radio and batteries, or extra ammo I was the guy. I had a saying that I was like a five-ton truck: I wasn’t going to get there in a hurry, but I was going to carry a lot of stuff with me. I was affectionately called The Duer2000 by my peers when referring to my forklift type abilities.”

While he doesn’t participate in other “Strong Man” type events, he says the games give him something to work towards in his athletic training instead of just going to the gym to work out day after day. He instead goes with a purpose to work on one of his weaknesses in throwing or to improve his focus.

“There are some things that Highland Games athletes and air traffic controllers have in common,” said Duer. “One is attention to detail. When throwing, every little change to your body position can increase or decrease your throw. Another is focus. We usually laugh and joke in between throws, but when you are up your whole mentality changes to absolute focus on that throw. Third is repetition. You don’t get good overnight, it takes repetition to get into your rhythm of throwing.”

Duer’s ultimate goal is to travel to Scotland in the next few years to compete. His family has been traced back to the Colquhoune Clan of Luss Scotland where they host a Highland Games every year in July. They have hosted the games in Luss since 1875 and only missed years due to both world wars. He plans to go not just to compete, but ultimately, to win. He also encourages others to get involved and join a wonderful community of athletes.

“The Highland Games are amazing events to get involved with,” Duer says. “You don’t need super human strength or a background in throwing to compete. There are hundreds of games throughout the U.S. in the spring, summer, and fall. They welcome all and will help you throughout the games.”