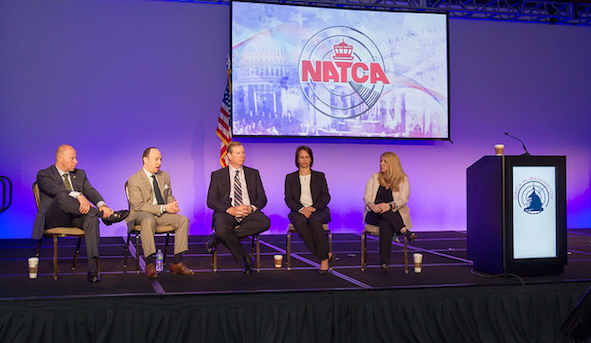 NATCA in Washington 2016 hosted 400 air traffic controllers who went to Capitol Hill in Washington, D.C., to advocate for NATCA and the future of air traffic control. On Tuesday, May 24, NATCA President Paul Rinaldi, NATCA Executive Vice President Trish Gilbert, and Special Counsel to the President Eugene Freedman took the stage during a question and answer session open to all attendees to address the challenges facing the NAS due to unstable funding. CATCA members Paul Berry, Toronto ACC controller and Branch Chair, and Charly Stratton, Vancouver Tower controller and Branch Vice Chair, joined them during the discussion.

During the question and answer session, Rinaldi highlighted the need to share factual information at all facilities. One attendee was concerned that members at his facility are ready to “jump ship” due to NATCA’s support of the Aviation Innovation, Reform, and Reauthorization (AIRR) Act of 2016 and asked how to reach those members with NATCA’s message.

“I think it starts with the facts,” said Paul Rinaldi. “Educate them on the facts and not the fear.”

Any change NATCA would support would have to ensure:

Another attendee was concerned that if the air traffic control operation were to move into a not-for-profit entity, that there would be a reduction in the workforce. However, this was not the case in Canada when they went through transformational reform.

“Initially, there was zero loss of union members when going from Transport Canada to NAV CANADA,” said Berry. “The amount of airplanes didn’t change. You can’t mitigate traffic without bodies.”

“We actually reopened one tower and built an additional tower,” added Stratton.

“We just got the word out to mitigate fears,” said Berry. “There were a lot of concerns right out of the gate,” said Berry.

“It just wasn’t working,” said Stratton. Adding that the inability to thrive in current conditions made changing over to a new system an essential choice.

Rinaldi and Gilbert made it clear during the session that they have not taken the decision to support the type of transformational reform outlined in the AIRR Act lightly. NATCA has made it a priority to learn from past transitions and ensure they include as many protections as possible in any proposed legislation.

“We went to Canada and spoke with union leadership who were the architects of the transition, including the attorneys,” said Trish. “We asked them, ‘if you had to do it again, what would you make sure you adequately address?’ We got as much of those answers as we could into the bill so we could be protected by law.” 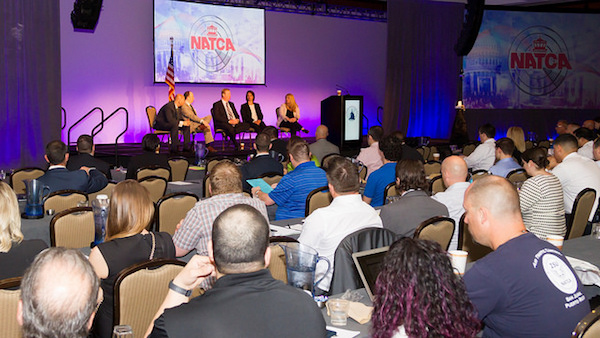 Rinaldi and Gilbert repeatedly enforced how important being at the negotiating table is when new legislation is written and proposed. Rinaldi explained that change is coming and if it is the will of the membership to oppose change until the bitter end, he will fight for that, but fears NATCA will be steamrolled in the process.

Rinaldi also explained that the issues of funding and reform are marathons, not sprints.

“This is just starting,” Rinaldi said. “Controllers have 20 plus years of a successful transition in NAVCANADA. We don’t like the UK system, but even UK controllers wouldn’t go back to being a government entity even though the new system is flawed. They fought until the end against change, then got the scraps.”

To avoid getting the scraps, Rinaldi explained that NATCA must continue to be engaged and at the forefront of any possible change to the NAS to ensure that NATCA employees are protected and that all current Union rights are put into whatever proposed law may come to pass.

“People in your facility may want to fight, may want to quit,” said Rinaldi. “We don’t govern ourselves by people who are going to quit. We govern ourselves by what is good for the collective of our membership and the constitution mandated by the supreme body every two years. At the end of the day, change is coming. Do you want to shape it or sit on the sidelines and get run over?”

In efforts to ensure all of NATCA’s membership is informed on these issues, Rinaldi and Gilbert have been traveling to facilities all over the country for membership meetings. They believe face-to-face contact is important and feel that speaking to a membership that has become very engaged in the future of the Union is a great first step. They explained that during these sessions, once members opposed to change understood the historical context of these issues and the steps NATCA is taking, that many of them strongly believe change is the right course.

“We have to find stable predictable funding or we will be a smaller aviation system,” said Rinaldi. “A comprehensive approach to modernizing and running our system is necessary. We don’t want to be NAV CANADA but we can’t be stagnant. Let’s build a better system. Together.”