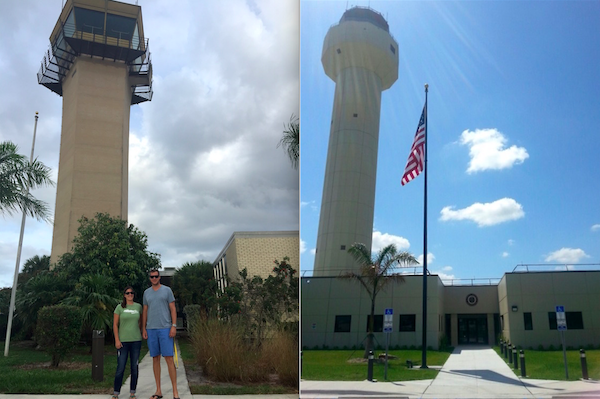 At 6:30 a.m. EDT on Wednesday, June 22, the new West Palm Beach TRACON (PBI) opened for air traffic, concluding 10 years of uncertainty and ushering in a new era of air traffic control for the region. As the old facility closed at 10 p.m. EDT on Tuesday evening, controllers Anne Nerrie and Kevin Stefura made their final sign-offs.

“Attention all aircraft, this is the final transmission from the old Palm Beach Approach Control,” they relayed. “Thirty-seven years of ATC services and an era have come to a close. We would like to thank everyone who has ever worked at PBI during the past 37 years for their hard work and dedication. And also, we thank the flying public for giving us a reason to be here today and in the future. At 0600, PBI’s new state-of-the-art facility will begin operations and that will be the voice of safety, efficiency, and our future.”

Over the next eight hours, the Engineering Services Group and TAMR installation team pulled cables, cut over the power, and installed the brand new communications and electronics equipment necessary to open the next morning.

“The amazing work of these folks and the TAMR program cannot be overstated,” said PBI FacRep Bill Fiedler. “They are extraordinary in their own way and contribute mightily to the success of opening a new facility.”

“This TRACON is the result of the hard work of many people from numerous facilities and job descriptions, as well as our elected representatives in Congress,” Southern Regional Vice President Jim Marinitti said. “It represents collaboration and leadership on all levels from those who were willing to listen and work through the challenges. They arrived at a conclusion that met the needs of South Florida. This is a great day for all involved.”

As the new TRACON opened, controller Chris Palumbo made the first broadcast.

“Attention all aircraft,” he relayed. “This is the new Palm Beach TRACON signing on. For all who have supported this beautiful facility in its development, design, and implementation we thank you. For the millions of air traffic services that will be provided in the future, we promise our dedication to safety and efficiency for the passengers and pilots that will pass through our airspace. Today, this state-of-the-art facility will begin a new chapter in aviation history for the new Palm Beach TRACON and the Federal Aviation Administration.”