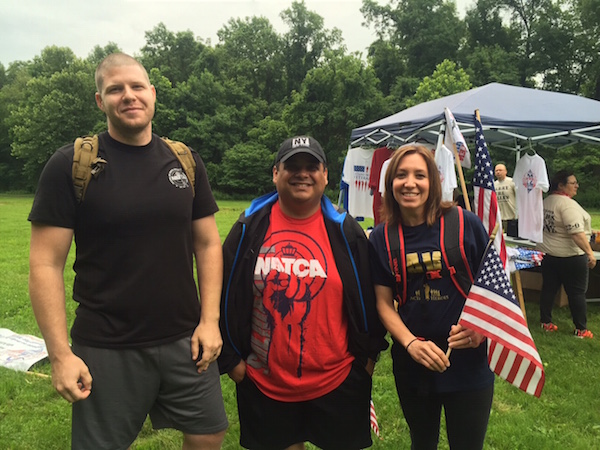 Shannon Shuey of Allentown Tower (ABE) is no stranger to the unique demands on soldiers. She is a Navy veteran and FacRep at a facility composed of many veterans. Together with ABE Vice President and Marine Corps veteran Jeff Haslet, as well as ABE Reloaded Rep Richard Navarrette, Shuey embarked on a 22-mile ruck walk in the pouring rain to benefit soldiers suffering from post-traumatic stress disorder (PTSD) and to raise awareness about veteran suicide in June of 2015.

A rucksack is a backpack that army infantry wear when in the field in which soldiers carry all of his or her heavy gear. Carrying this bag during the walk symbolizes the weight and emotional burden that veterans suffering from PTSD carry with them every day.

“When you are looking at a soldier suffering from PTSD, you can’t necessarily see the wounds that they have because they are internal,” explains Shuey. “As you get tired from the weight of the backpack on these walks, which could weigh anywhere from 25-55 pounds, you begin to physically understand what it feels like to carry that emotional burden of PTSD.”

The 22-mile walk represents the 22 veterans per day who commit suicide due to PTSD-related feelings. It is worth noting that less than half of the states in the country register veteran suicide statistics, so in reality, the number of PTSD related suicides in veterans could be much higher.

“This was my first ruck walk, and I’m definitely going to do another one,” says Navarrette. “It made me realize that whatever I put my mind to, I can do. It would be great to get more people involved in these events. The money raised by the walk goes directly to the charity. They are in the process of building a facility for veterans suffering with PTSD.”

Once the NATCA Charitable Foundation (NCF) heard that the controllers were going to participate in this great event, NCF President Elena Nash and NCF donors were quick to contribute money to this great cause. Because of the high number of veterans in the NATCA workforce and in NATCA families, this is the type of event that NCF is built for.

Shuey was so inspired by the Ruck Walks, she signed up to be a team leader in the New Jersey-Pennsylvania area and hosted her first ruck in October. Shuey would like to extend an invitation to all NATCA members who would like to participate, organize their own teams, or donate.

“It is important to me and my husband to be good role models for our three children,” says Shuey. “These events are different from anything I’ve ever done before in that it is about helping people who need you. When my kids grow up, I want them to be the type of people who help others. As the FacRep at my facility, I also share that idea with my coworkers and members. ABE is a smaller facility, and it’s hard for a bunch of us to get a weekend day off to do it, so people donate if they can’t participate. It’s been a positive bonding experience for all of us.” 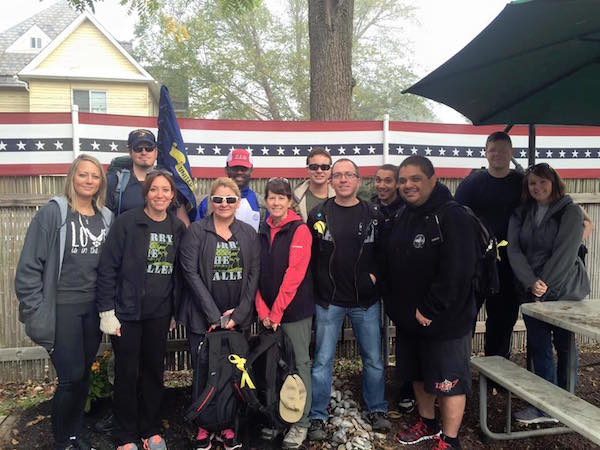 Shuey continues to be a team leader in ruck marches and also organizes zumba-thons to benefit Active Heroes. “All proceeds we get go right to Active Heroes,” Shuey explains.

If you are interested in participating in a ruck walk or learning more about how to donate, please contact Shannon Shuey at shannonshuey@gmail.com.

To learn more about Carry the Fallen and the origin of the Ruck March, please click here.