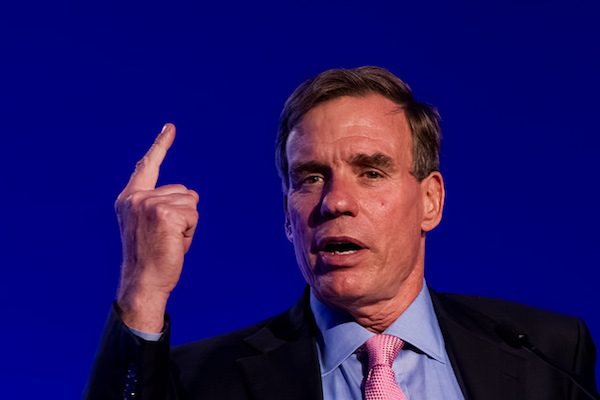 Senator Mark Warner, D-Va., was elected to the U.S. Senate in November 2008 and reelected to a second term in November 2014. He serves on the Senate Finance, Banking, Budget, and Intelligence committees. He has established himself as a bipartisan leader who has worked with Republicans and Democrats alike to cut red tape, increase government performance and accountability, and promote private sector innovation and job creation. Senator Warner has been recognized as a national leader in fighting for our military men and women and veterans, and in working to find bipartisan, balanced solutions to address our country’s debt and deficit. Sen. Warner also serves on the Virginia Unmanned Systems (UMS) Commission.

“Every day across this country, you perform that absolutely essential task,” he said. “As somebody who’s part of the traveling public, we don’t say thank you enough. On behalf of the millions of Americans who fly safely because you guys do your jobs, thank you very much.”

Sen. Warner went on to praise NATCA’s excellent leadership. He said that NATCA President Paul Rinaldi, Executive Vice President Trish Gilbert, and Director of Government Affairs Jose Ceballos are some of the best leaders in Washington, D.C. and that there is no organization, union, business, or association that has stronger leadership than NATCA.

“So often, so many organizations are all about how to maintain status quo and not rock the boat too much,” he said. “Well, NATCA members, that is not your President Paul Rinaldi. He has been willing, when we think about how we really make sure America maintains the best air traffic control system in the world, to take in opinions from all sides of the political aisle to do what he thinks is right for you, and what is right for the traveling public.”

Sen. Warner went on to say that because of the courage of Rinaldi, Gilbert, and all NATCA members to continue to make the NAS the safest, most efficient, most complex airspace system in the world that he will always be in a foxhole with NATCA. He said that he is proud to call Rinaldi his friend.

Sen. Warner said if the United States air traffic control system hopes to continue to be the envy of the world that air traffic controllers must invent a new way. He cited the 27-year low of Certified Professional Controllers (CPCs) and the fact that the Federal Aviation Administration (FAA) continues to miss hiring targets.

Sen. Warner also described new technology like NextGen that is being introduced into the system. While he views these advancements as a good thing, he said that, “all the technology in the world isn’t going to replace the human skills and judgments that you have to exercise dozens, if not hundreds, if not thousands of times every day.” He said that NextGen is late, over-budget, and not nearly far enough along on the path to really make sure that air traffic controllers have the tools they need.

“You can’t have that investment or predictability to modernize when the FAA is caught in the past,” he said. “The FAA is critically important to safety but should also maintain the system.”

Sen. Warner applauded NATCA leadership for wanting to build a better system. He acknowledged his worry that if we do not keep up with air traffic systems like NAV CANADA, that other countries could begin to take over portions of the United States’ airspace.

“We need whatever reform that will give you the tools you need to do your job because if we don’t, what are we back to?” he asked. “We’re back to the age of sequestration.”

Sen. Warner explained that the air traffic control system is too critical for public safety and commerce to be dependent on the whims of a Congress that can’t even pass budget or appropriations bills.

The Senator concluded his remarks by saying that he doesn’t know what reform might look like yet, but if it gives air traffic controllers the tools they need –  secure funding to modernize the NAS and stay competitive with the rest of the world – that he would support it.

“If you need an ally in the Senate, count me in,” he said. “You all have been extraordinary friends to me for a long time. I’m looking forward to being in that foxhole with you on this current fight for modernization and making sure you get the resources, respect, pay, and credibility that you deserve for many years to come.”