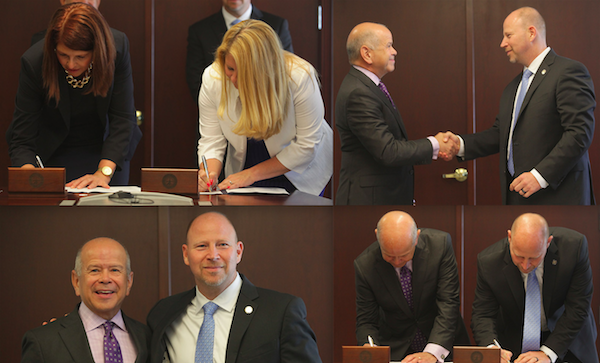 NATCA is proud to announce that the ATCS/TMC/FSS/NOTAM Collective Bargaining Agreement with the Federal Aviation Administration (FAA) was signed at 3:30 p.m. on July 14, 2016. This contract incorporates all of NATCA’s collaborative principles and processes and will provide stability for the workforce for the next six years. The contract goes into effect July 24, 2016.

“We have worked hard over the last seven years to build a collaborative relationship with the FAA,” said NATCA President Paul Rinaldi of the contract signing at FAA Headquarters. “There are many successes we can point to that have come from us working together. However, the signing of this contract is the biggest success to date and it’s a validation that the FAA and NATCA agree that collaboration is the only relationship we should have in order to complete the goals and mission of the Agency. We look forward to solidifying our collaborative relationship for years to come.”

“This is a landmark occasion,” Rinaldi said at the beginning of the signing ceremony. “It shows the world that working together in collaboration is the only way to succeed in modernizing our system and building the next generation of equipment and procedures so the FAA can continue to be the gold standard in the world. For the last seven years, we’ve been trying to figure out the road to collaboration. We’ve found our groove and we have built a foundation that hopefully never breaks. Thank you.”

“You know, I think this is a very significant day when you think about the hard work that all of you have done,” said Huerta prior to signing the contract. “As we look towards the future of modernizing our airspace and we tackle the many challenges coming our way in the years ahead, we’ve given ourselves time. We’ve given ourselves a long-term agreement and the ability to focus on the thing that is most important to all of us: running the safest, most efficient NAS in the world. Thank you.”

NATCA would like to thank the Contract Negotiating Team, National Executive Board, facility representatives and local executive boards, committees, workgroups, collaborative process representatives, hundreds of safety and technology representatives who are helping us deliver meaningful achievements in our commitment to modernization, National Office staff, and every one of our members who has contributed their time and energy to the Union’s collective efforts.

“Today’s signing of the contract memorializes our commitment to collaboration and acknowledges the long-term benefits that it provides to both NATCA and the Agency,” said Iacopelli. “The new contract is commensurate with the outstanding work that our members perform on a daily basis in support of the safest and most efficient airspace in the world.”

For all information online about the contract, including the full text of the CBA, a rollover and change summary, and frequently asked questions.

Please send all questions for the contract team to 2016cbaratification@natca.net.