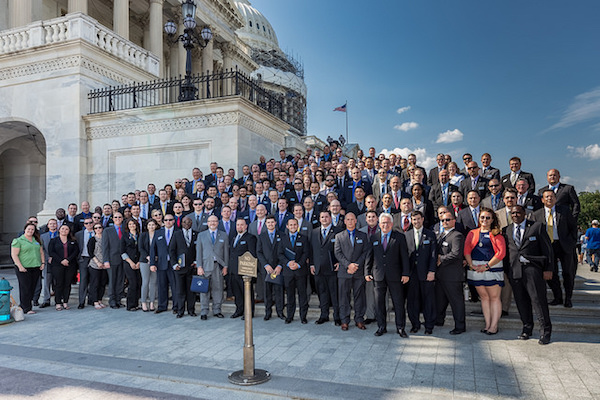 The House and the Senate have beaten the July 15 deadline and passed an extension for Federal Aviation Administration (FAA) authorization that runs through Sept. 30, 2017. However, this is not the typical extension Congress has now done 25 times to the FAA in the last 10 years.

This extension marks a significant achievement for NATCA’s national and local legislative efforts led by the National Executive Board, the National Office, and the National Legislative Committee (NLC). The legislation addresses the controller staffing crisis, including language that will streamline the hiring process by allowing experienced controllers, military veterans, and graduates of schools in the FAA’s Collegiate Training Initiative (CTI) to be hired more expeditiously. CTI graduates and veterans will be considered in a separate pool from the general public. The extension will also increase the maximum entry age for a controller with 52 weeks experience to 35 years of age.

The language is nearly identical to that contained in H.R. 5292, the Air Traffic Controller Hiring Improvement Act of 2016, sponsored by Congressmen Carlos Curbelo, R-Fla., and Sean Patrick Maloney, D-N.Y., that was introduced just before NATCA in Washington attendees arrived on Capitol Hill in May.

That the language was included in the extension is no coincidence, as Central Region Legislative Representative Allison Schwaegel wrote to NCE members this week. “All of this should sound familiar to you because it was the ask this year at NATCA in Washington,” she wrote.

In the spring, when given the likely delay of a long-term, comprehensive FAA bill that NATCA would prefer, NATCA immediately engaged to identify another legislative path forward that would address the controller staffing crisis, that has sent the total of fully certified controllers plunging to a 27-year low. NATCA Director of Government Affairs Jose Ceballos said the Union quickly found the right legislative fix through H.R. 5292.

“During NATCA’s annual lobby week in Washington, D.C., the week after introduction of the bill, nearly 400 NATCAvists flooded Capitol Hill to urge support and co-sponsorship from their elected officials,” Ceballos said. He added that the success of NATCA’s lobby week was clear: Congress understood the urgency of the staffing crisis when 250 bipartisan members of Congress co-sponsored the bill in only 24 legislative days.

“The overwhelming support for H.R. 5292 provided the necessary push that NATCA needed to successfully advocate for the immediate inclusion of the language into the FAA extension,” Ceballos said. “The inclusion of the controller hiring language in the FAA extension is a tremendous victory for NATCA. The language will take significant steps to improve the FAA’s broken hiring process and ease the controller staffing crisis that has been plaguing our aviation system for way too long.”

“The inclusion of the common sense hiring language in the extension is a huge win for our understaffed facilities and the National Airspace System (NAS),” added NLC Chairman Steve Weidner. “This was a total team effort by our leadership, the Legislative Committee, our activists in the field, our NATCA in Washington attendees, and our government affairs staff. Great work by all!””

Before the FAA extension was debated and passed this month, NATCA President Paul Rinaldi advocated for H.R. 5292 during his testimony at a House Aviation Subcommittee hearing on controller staffing June 15. Executive Vice President Trish Gilbert also wrote an op/ed promoting the benefits of the bill that appeared in The Hill newspaper that same day.

“The Air Traffic Control Hiring Improvement Act of 2016 would streamline the hiring process and allow military veterans and graduates of the Collegiate Training Initiative to be hired more expeditiously without causing any additional delays in the hiring process,” wrote Gilbert. “These are common sense reforms that would make a real difference and benefit the entire NAS. The House Transportation Committee is also examining the issue in an upcoming hearing.”

As noted by reporter Aaron Karp in Air Transport World, this latest extension means that by Sept. 30, 2017, “FAA will end up running on temporary extensions for about two-thirds of the decade from Sept. 30, 2007-Sept. 30, 2017. During that 10-year stretch, FAA will have operated under an official reauthorization only from February 2012 through September 2015.”

NATCA issued a statement on July 7 urging passage of the FAA extension. It made clear that while keeping the FAA funded in the short-term was important, a long-term authorization is essential to the NAS: “While NATCA considers the extension a good start that provides certainty through the end of the next fiscal year, our preference is for a full, long-term reauthorization with stable, predictable funding that ends both sequestration and the stop-and-go funding that has harmed the NAS.”