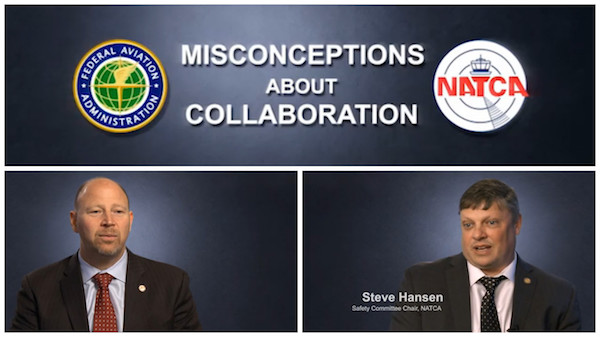 This is part 3 of 5 in a series about collaboration.

According to Rinaldi, one of the biggest misconceptions is the idea that everyone must agree. Collaboration does not require either party to sacrifice their interests.

Rinaldi states in the video that managers may think, “Well, I’m collaborating, therefore, I’ve given up all my positional rights.” This is simply not true.

Collaboration should not be construed as a waiver of any Union or Agency right. In a true collaborative environment, both parties take responsibility to engage in meaningful dialogue with their counterparts. This includes making a genuine effort to ensure that both parties interests have been identified and that as many as possible have been addressed before determining an outcome. Through collaboration, parties share a common respect for the rights and responsibilities of NATCA and the FAA. Bristol points out in the video that despite any concerns, this is not co-management.

“I’m not a supporter of co-management,” Bristol says. “Managers and Reps have very distinct and different roles to play.”

“At the end of the day, everyone involved in collaboration is still responsible and accountable for the things that they’ve been hired to do,” Arel adds in the video.

Biggio points out that another misconception about collaboration is that both parties may feel there is a need to say “yes.” He stresses that “no” is an acceptable answer that can be talked about with dignity. Collaboration simply enables both parties to better understand why the answer may be “no.”

“It doesn’t have to be everything my way, everything the Agency’s way,” says Rinaldi. “It really is about finding the best results and you have to just continue to work through it.”

A negotiation is a formal discussion between people who are trying to reach an agreement. Traditionally, negotiations take place behind closed doors. One party states their position to the other party, who then dismiss themselves, speak privately, and return with their position. Negotiations are only position-based. Each party commits to a position early in the process and thinks only of individual wants and needs. It can be an adversarial method of bargaining and pits the parties against each other.

Interest-based bargaining is a method of negotiating that focuses on meeting the underlying concerns, needs, or interests of the parties involved in the negotiation. Both parties are encouraged to communicate with each other the importance of their respective issues rather than only argue for a specific position. This type of bargaining allows both parties to understand where the other party is coming from, and it enables more cooperation. It’s important to remember that interest-based bargaining is not collaboration. A collaborative relationship enables interest based bargaining, which can be more effective than traditional negotiation methods.

Arel says that though some FacReps or Managers may enjoy a more traditional means of negotiating or they may be more resistant to change, his challenge to them is asking themselves if they are happy with their current situation.

“If you are reluctant to collaborate I would say take a chance — it works,” adds Hansen. “It’s proven to work. You see it in everything we do now.”

The timing of these videos couldn’t be better, as the success of NATCA-FAA collaboration is displayed once again with the new ATC/TMC/FSS/NOTAM contract, which was signed on July 14 and took effect on July 24. Collaboration is named several times throughout the contract. It incorporates all of NATCA’s collaborative principles and processes and will provide stability for the workforce for the next six years. Collaboration is not simply a memorandum of understanding. It is a practice that has been fostered by NATCA and the FAA for the last five years that is now memorialized by the contract.

Watch the third video today and check back in the NATCA Insider for the fourth installment, “Sustaining Collaboration.”