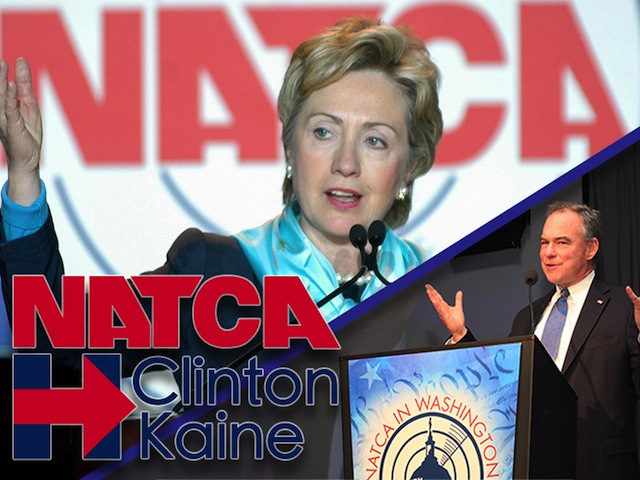 NATCA’s National Executive Board voted unanimously to endorse the Clinton-Kaine ticket after carefully considering how each of the presidential candidates’ records and statements, as well as their parties’ platforms, would affect its membership.

NATCA President Paul Rinaldi called Secretary Clinton “a strong advocate for working families who shares our commitment to ensuring that the National Airspace System (NAS) remains the safest, most efficient, most complex, and most diverse in the world.”

Rinaldi also praised Senator Kaine, calling him “a great friend to NATCA members during his time in the United States Senate.”

“Senator Kaine recognizes the need to ensure stable, predictable funding for the NAS so that we can remain the world’s leader in aviation,” Rinaldi said.

NATCA Executive Vice President Trish Gilbert said, “Secretary Clinton supported our members when she was a Senator from New York and was an advocate for employees’ rights as Secretary of State. She believes in organizing and collective bargaining, rights that are fundamental to all unions.”

“This is an election that presents a clear choice,” said Rinaldi. “Secretary Clinton and Senator Kaine will fight for our members’ rights and are committed to improving the infrastructure of the NAS so that our members operate with the best equipment and technology. They recognize the professionalism with which our members perform their duties, ensuring the safety of the flying public 24 hours a day, seven days a week, 365 days a year. NATCA proudly endorses Clinton-Kaine.”