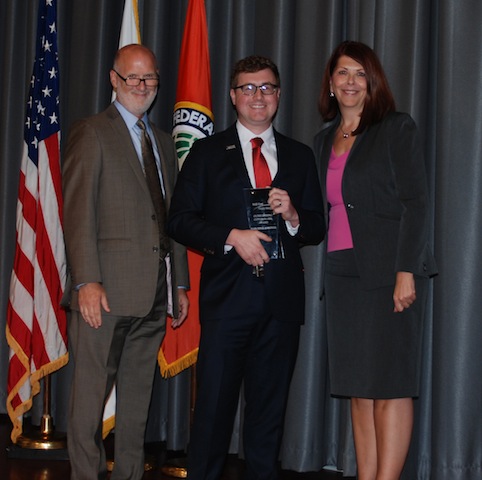 “These are small and tangible reminders that what we do matters,” FAA Administrator Michael Huerta said. “Our success here at the FAA is tied to all of yours.”

Several NATCA members were among the employees honored for outstanding achievement during the past year:

Stoffer was honored for a flight assist in April that ensured the safe landing of a Cirrus pilot. “It was an honor to receive the award,” said Stoffer (pictured below with Bristol and Park). “I can’t help but think about all the other flight assists that go unnoticed around the Agency. While recognition is appreciated, it is not one of the driving motivators for myself or, I think, my brothers and sisters in NATCA. I’d like to share this award with anyone who did something special without anyone noticing.

“In regards to what happened in April, I think the pilot did a great job staying calm in a tough situation. Burlington sector at Chicago Center was a huge help by working the other aircraft in my airspace so that I could focus on the Cirrus alone. Peoria Approach helped me formulate my plan in the event the Cirrus couldn’t make ground contact with Kewanee or GBG (Galesburg) and they kept me abreast of the weather in their area. They located an airport in their airspace that had VFR conditions and was safely in-range for the Cirrus. When I relayed this information to the pilot, I believe he felt he was in less of a dire situation and was able to remain focused. I can’t thank either facility enough and I’m not sure that situation would have ended the way it did without their help.”

Rose, NATCA’s new Terminal Automation Representative, taking over for Herrick who retired last month, said the largest ARTS 3e facilities have been fully transitioned to STARS as New York TRACON (N90) achieved Initial Operating Capability in May. “This achievement would not have been possible without the coordination and collaboration between the FAA and NATCA,” said Rose, who said the term “paying it forward” characterizes this team. “It means that TAMR facility subject matter experts (SMEs) took time away from friends and family to travel ahead to subsequent facilities to ensure a smooth transition to STARs.”

The award winners worked closely with Air Traffic Managers, FacReps, and local TAMR SMEs to identify and mitigate hardware or software issues. In addition, they traveled well in advance to train controllers and Front Line Managers on the new software. Approximately five months prior to the planned IOC events at each facility after Dallas TRACON, a lessons learned meeting was hosted where previous issues were discussed and fears quelled.

During the IOC events, NATCA’s representatives were on site to help ensure controllers’ questions were answered and coordinate with OSF specialist Garcia from Denver OSF, who, Rose said, “went above and beyond to help facilities overcome automation issues. Jon Bealles and Steve Hartsoe traveled to numerous facilities to walk the operations floor during the transition and teach controllers for weeks on end. I coordinated all training activities with individual facilities and Raytheon. Doug Peterson played an important part in coordinating between OSF and the TAMR program office to ensure software worked properly before, during, and after IOC. Last but not least was Mitch Herrick, the man behind the scenes to collaborate and coordinate with the TAMR program office at a national level.”

Rose said there are more NATCA brothers and sisters who work around the clock every day to transition facilities. “We must understand how much goes into moving the National Airspace System into the 21st century,” he said. “The volunteers within all programs that NATCA is a part of care deeply about the Union and our career field. Next time you see a NATCA member in your facility, please consider introducing yourself and offer assistance to make our Union and our profession the best it can be.” 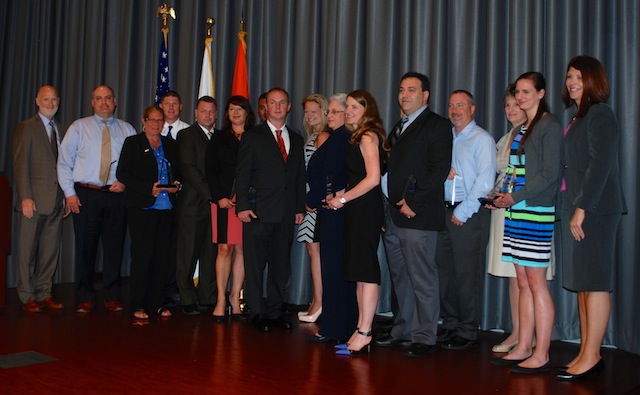 Below is the nomination write up for this award, written by the FAA’s Amber Natale:

Achieving the milestone of Initial Operating Condition (IOC) at each of the former ARTS IIIE TRACONs in the NAS is a substantial step toward the goal of bringing all Terminal Automation Systems onto one hardware/software platform. While the hardware has been deployed at each of these facilities for a significant period of time, during the award period the final seven of the 11 ARTS IIIE TRACONs achieved IOC. This tremendous achievement was due to the spectacular program management skills of the TAMR Phase 3 Segment 1 transition team. The cross organizational team with representatives from the TAMR Program Office, NATCA, PASS, and Terminal Second Level Engineering relied upon each other to address the many unique challenges that transitioning the most complex TRACONs and associated ATCTs presented while maintaining continuous operations presented.

The team was responsible for completion of all the ABP milestones related to IOC for TAMR Phase 3 Segment 1 substantially ahead of schedule. In fact, the IOC milestone for the final site was completed five months ahead of schedule. This achievement can be directly linked to the methodology the team designed which allowed facilities to identify and mitigate hardware or software issues before attempting to maintain continuous operations on the STARS system.

The transition team relied upon a collaborative approach to addressing the issues and risks that presented during the preparation for transitioning from the ARTS IIIE to STARS. NATCA and PASS leadership on the IOC team stepped forward to help facility representatives identify acceptable operational workarounds or mitigations when the STARS system operated differently than the existing automation system. Team representatives also identified, and in many cases trained Subject Matter Experts (SME) from other facilities to support the IOC events. These SMEs were available on site in addition to the core IOC team for local facility personnel to rely on for during the high-stress period of initial transition and subsequent events.

Transition team members were extraordinarily committed to the effort, working well outside normal business hours for a sustained period of time. IOC events were scheduled during low traffic periods over several days to ensure that a smooth transition was achieved with minimal operational impact. Team members were on site for each of these events, working overnight and throughout the weekend to support the effort. Strong partnerships were built with each facility in order to achieve the aggressive schedule. Lessons learned meetings were hosted at each facility approximately five months prior to the planned IOC event. During these sessions, key facility leaders from previous sites were invited to come and speak on their experiences, observations, and recommendations for the upcoming effort. Representatives from Technical Operations, Air Traffic Services, and the facilities Operational Support Facility team were invited to attend the preceding facility’s IOC event. These efforts paid huge dividends in building strong intra-facility relationships that were relied upon as roadblocks to achieving IOC presented themselves.

The team employed sound program management techniques to achieve the transition to STARS operations. Many of the TRACONs had more than 10 remote facilities, which resulted in teams in excess of 100 personnel that required communication and coordination activities. Team rosters, risk and issue registers, and regularly scheduled status meetings were essential to keeping such large teams focused on the significant operational event that IOC represented at their facility. Team members recognized that while the STARS transition was their primary focus, it was not the primary focus of facility personnel. To address this issue, the team employed changes in meeting frequency combined with regular on site meetings to ensure that facility personnel were had all of the technical and programmatic information they needed to be prepared for the upcoming event. 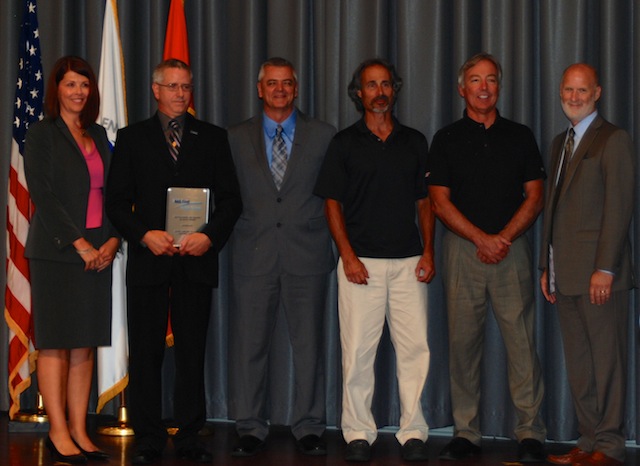 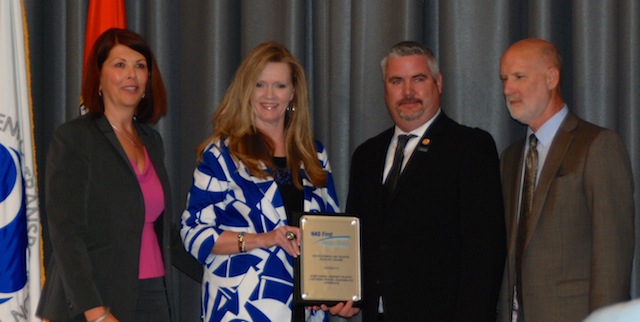 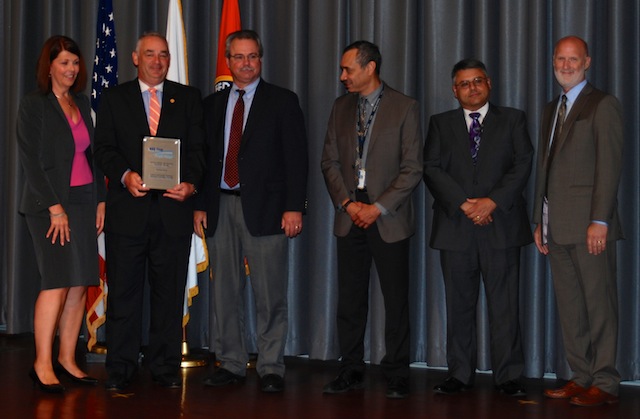