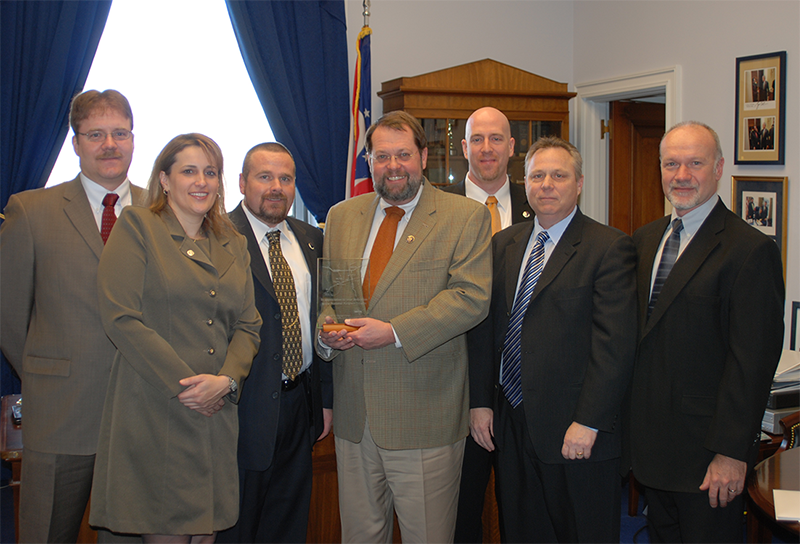 NATCA is mourning the passing of former Ohio Congressman Steve LaTourette, a thoughtful and passionate legislator and public servant who put country ahead of partisanship and possessed a relentless dedication to supporting aviation safety professionals while working to ensure the growth and safety of our National Airspace System (NAS).

LaTourette passed away on Wednesday, Aug. 3, after a battle with pancreatic cancer. He was 62.

“Congressman LaTourette was always pragmatic on every issue, a wonderful quality that truly made him special,” NATCA President Paul Rinaldi said. “He was a true NATCA champion, and I was so honored and proud to call him a personal friend of mine. This is a tremendous loss and all of us at NATCA extend our deepest sympathies to his wife, Jennifer, his six children, and all of his family members and friends.” 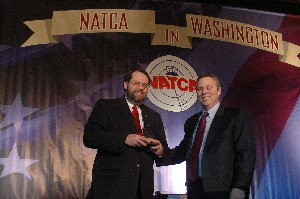 In 2007, NATCA presented LaTourette with the James L. Oberstar Sentinel of Safety Award (left). It is NATCA’s highest honor for an aviation leader outside of the Union who has displayed outstanding achievement in the advancement of aviation safety. At the time, LaTourette was only the third winner of the award and reflected the fact that his leadership on aviation safety issues was historic, aggressive, and courageous.

“Congressman LaTourette was a champion of NATCA in the most compelling and dedicated way, always fighting for the safety of the system and that meant fighting for the workers, our members, who worked with him,” said NATCA Executive Vice President Trish Gilbert, who worked closely with LaTourette as NATCA’s Legislative Committee Chair and in her current position. “In our relationship with him, he was so focused on finding solutions and improving our members’ working conditions and, thus, making the system better and safer overall. We have missed him since he left Congress. This world is a better place having had him in it.”

As a member of the House Transportation and Infrastructure Committee, Congressman LaTourette consistently introduced and supported legislation that made aviation safety a priority. In 2006, he led the fight to establish basic fairness and equity in FAA/union negotiations. He understood that a fairly negotiated and ratified contract would provide consistency and stability to the NAS, thereby ensuring the safety and security of the flying public.

“The important work that you do is stressful enough without having a problem with the federal government and worrying whether or not you have good work rules, a good grievance procedure, good pay, and a good contract,” LaTourette told NATCA members during his remarks at NATCA in Washington in 2010.

In 2007, just a few months after the FAA imposed the White Book on NATCA’s air traffic controller bargaining unit, LaTourette spoke at NATCA in Washington to sharply criticize the Agency’s actions. He noted the fact that the imposed working conditions included such things as a dress code and removing radios from the operational environment, but took the Agency to task for heavy-handed actions that resulted in a large number of controllers retiring early and exacerbating a worsening national staffing shortage at the time.

“With all the problems that the FAA has on its hands, I would hope they’d be more concerned about keeping controllers in towers than keeping radios out. But I guess we all have different priorities,” he said. “I don’t think little turf battles like this make for the best work environment and can only lead to more controllers saying retirement is preferable to sticking around. I firmly hope that we’ll be able to right this aberration and let both sides get back to the table. What transpired last summer is not good for the Congress, it’s not good for the FAA, and it’s not good for air traffic controllers.” 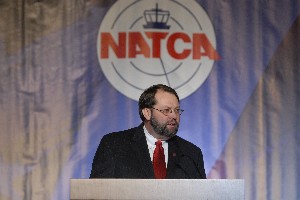 LaTourette continued, “Nobody won when the contract was imposed and I fear that the people who might ultimately suffer the greatest are those that board a plane and expect that their lives are in the hands of the competent, hard-working, and alert air traffic controllers. Anything less is a gamble not worth taking.”

Congressman LaTourette co-sponsored the Secure Transportation for America Act of 2001 which, among other things, established standards and responsibilities for the Transportation Security Administration. In 2002, he co-sponsored legislation that would allow pilots of commercial aircraft to carry guns to be used in the event of a terrorist attack or cockpit intrusion.

“Congressman Steven LaTourette was one of the greatest champions NATCA has ever had the honor to work alongside,” said Mike Hanlon (Cleveland Center), NATCA’s Great Lakes Region Legislative Committee Chair. “In my capacity as Ohio Legislative Coordinator, and then as the Great Lakes Region Legislative Chair, I had the profound opportunity to continue our relationship with him. He was a tireless advocate for what was right. Before, and during the imposed work rules, he was relentless in his pursuit of a fair process to protect NATCA’s members. He always stood with NATCA on our issues, even if it wasn’t the popular thing to do in the House.”

Hanlon added that LaTourette believed in collaboration and working together “to arrive at solutions to our common problems. He truly was a great man, and NATCA mourns his loss.”

Transportation Trades Department, AFL-CIO (TTD), President Ed Wytkind said that LaTourette, during his nine terms in the U.S. House, “put service and progress above partisan politics. I will forever remember the committee and House floor battles led by Rep. LaTourette in defense of transportation workers’ jobs and rights. Whether the debate involved investing in our transportation system, demanding fair trade policy, or stopping legislation aimed at weakening worker protections or bargaining rights in our laws, Rep. LaTourette repeatedly stood on the side of working people.” 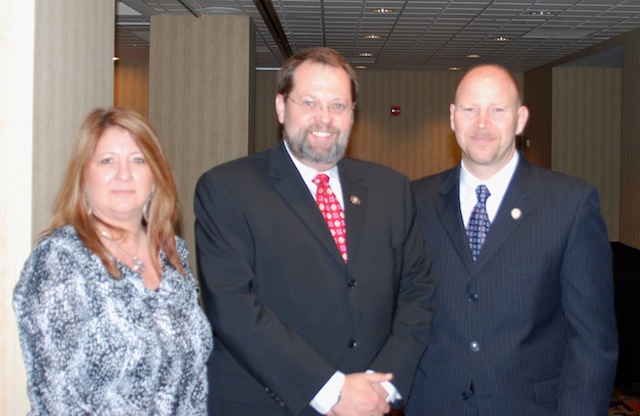