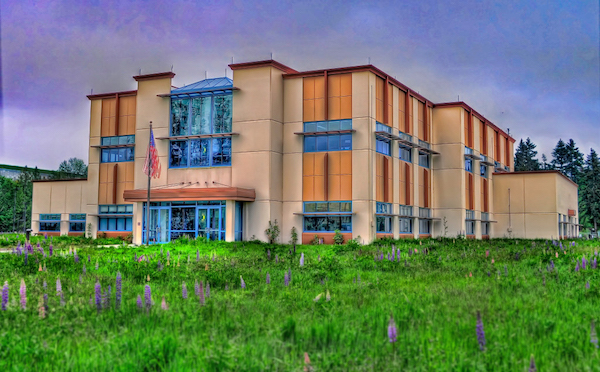 Seattle TRACON (S46) is home to a proud 100 percent NATCA air traffic control unit made up of 47 members. Three of the four TMCs and two of the five staff employees are also members.

The level 10 stand-alone TRACON was commissioned in April 2004. The facility is responsible for airspace approximately 48 miles north, 30 miles west, 30 miles east, and 45 miles south of Seattle ATCT (SEA) from the surface level up to 15,000 feet.

“Being sandwiched in between two prominent mountain ranges to the west and the east (the Olympics and the Cascades) as well as having Mount Rainier at 14,416 feet within our airspace can make terrain a serious challenge,” says Collins. “Our minimum vectoring altitudes (MVA) range from 1,700 feet in the vicinity of SEA and BFI to 16,500 feet around Mount Rainier, with our sharpest MVA step-up happening from 2,000-to-6,500 feet in only about eight miles.”

Additionally, the closely spaced runways at SEA, the airport layout, and the proximity of BFI make efficient throughput a constant challenge for controllers at the facility. The closely spaced runways at SEA, which require dependent approach rules and elaborate noise abatement procedures, prevent S46 from having more than one final controller, so whatever arrival rate is set must all come through one controller.

In addition, one of the most unique situations at S46 is the close proximity of SEA, BFI, and RNT — all within about a five-mile ring of each other.

“We have special authorizations and waivers which allow us to run concurrent approaches with a monitor in place or tower applied visual separation in cases where two or all three of the airports would need to be treated as a single airport,” explains Collins.

Boeing has a strong presence in the area with assembly, painting, and flight-testing occurring at PAE, BFI, and RNT. It is not unusual to see heavy or experimental air carrier prototypes flying around and executing practice approaches in S46 airspace. Mixing these large experimental aircraft with smaller GA aircraft can make for an interesting challenge to controllers.

“In our south satellite sector, we deal with quite a bit of special military operations including a live fire restricted area, parachute drops, TAC/Station Keeping Equipment (SKE) routes, and special authorizations,” Collins says.

The largest air show the facility works takes place at Arlington Municipal Airport (AWO), a normally uncontrolled airport, which is temporarily staffed as an FAA tower for the airshow. There are additional military and regional airshows at both Joint Base Lewis/McChord and Olympia.

“Every year we have a local festival called Seafair which revolves mostly around speedboat racing in Lake Washington, but the Blue Angels do two shows a day for three days of shows,” says Colilns. “These shows require special procedures to avoid the Temporary Flight Restrictions (TFR) which fall within only a few miles of SEA from surface level to 15,000 feet.”

Staffing at the facility has been a challenge for some time and gathering members for solidarity or social events can be difficult. S46 tries to treat every Union meeting as an event and make it as interesting as possible to encourage attendance. Members also occasionally get together with other local FAA facilities for joint events.

“The atmosphere at S46 is fantastic,” explains Collins. “Our local really sticks together and because we are not afraid of robust discussion and disagreement, we always band together as Union Brothers and Sisters.”

“My favorite part of being a FacRep at S46 is being able to get members actively involved in the decision-making process in the facility so that the facility is a reflection of the diversity of talent and ideas in the building, not just management or a few individuals,” Collins continues. “I also enjoy ensuring that members’ rights are being upheld and that they are being treated fairly and with respect.”