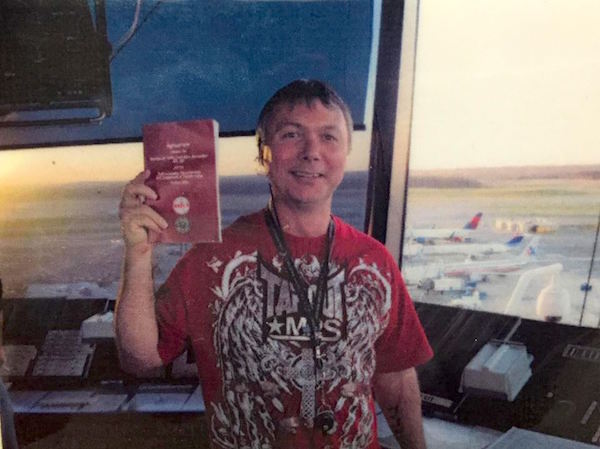 Aug. 12, 2016 // John Dunkerly Steps Down as FacRep at BWI, Dedicates Himself to Mentorship

“He taught me the value of education and diving in and getting your hands dirty,” Dunkerly said. “He did not have the opportunity to be part of a union until the last few years of his employment. He joined, knowing the value of having each others’ backs.”

It is that deep pride of union that guided Dunkerly throughout his career thus far as he has served NATCA in a number of ways. In June, he stepped down from his position as BWI FacRep after serving for 14 years, and is now working to support new FacRep Joseph Tamulonis.

Dunkerly, who also moved into a new job as a staff specialist at the facility, reflected on his time serving NATCA, which includes 23 years as a FacRep and all but one year of his FAA employment as a rep of some kind.

Dunkerly grew up in a small home in Lansdowne, Md., between BWI and downtown Baltimore. He has two younger brothers, including a twin — born four minutes after him — and a sister. Growing up with a grandmother also living with the family, he shared a room with his brothers. It was so small, he said, that it only fit one set of bunk beds and a rollaway cot on which he slept.

“With my mom and dad, it was about sacrificing and being there for one another, taking care of each other,” he said. “My dad was a no-nonsense man of few words who instilled in us the value of integrity, honesty, dedication, hard work, education, and family.”

He continued, “I got a job after school hours and bought my own car, paid my own car insurance and then had very little left for ‘fun.’”

Dunkerly worked until a few days before his high school graduation.

“I had enlisted in the Marine Corps during the summer between 11th and 12th grade,” he said. “My parents had to sign, since I wasn’t 18 yet. As such, I graduated high school on a Friday and by Monday morning I was on my way to Parris Island, S.C., for my ‘summer vacation.’”

He served four years in the Marine Corps as an air traffic controller. After his enlistment, he immediately started working at BFPE, Intl., a fire protection company in Hanover, Md. near BWI, for a few months. He then joined the Baltimore City Police Department for six months before resigning upon being hired at MCAS Cherry Point as a Department Of Defense (DOD) controller. That’s when his involvement with NATCA began.

“I voted to have NATCA represent us DOD Controllers at MCAS Cherry Point and then left before NATCA’s first contract with them took effect to join the FAA at Harrisburg Approach (CXY then MDT) in 1989,” he said.

In 1990, he became the vice president of the local, then FacRep soon after. He left Harrisburg in 1998 for BWI and immediately became a Crew Rep until assuming the FacRep role three years later.

Dunkerly said he looks forward to his new role as a Staff Specialist at BWI.

“Obviously I will always remain NATCA; I never would’ve taken the job otherwise,” he said. “This will allow me an opportunity to mentor as I near retirement.”