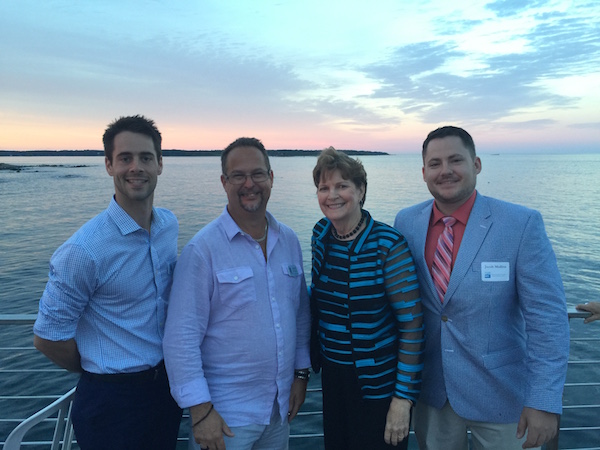 NATCA in Washington 2016 was a huge success and efforts to be a strong advocate and voice of this great Union continue at facilities throughout the country.

During the cruise, Senator Shaheen met with constituents and discussed current issues. Bowers, Pelton, and Mullins were able to have a long discussion with the Senator about issues important to NATCA and the challenges facing the National Airspace System.

“Southern Regional Vice President Jim Marinitti, Alternate Regional Vice President Jason Arnold, and Legislative Rep. Stan Parulski challenged us at our annual FacRep meeting to reach out to local congressmen and invite them to our facilities, regardless of party affiliation,” Englestead said. “Not because we need anything but to educate them on the hard work that air traffic controllers do day in and day out to try and build a relationship with them.”

Englestead reached out to Congressman Byrne’s office and asked him and his staff to visit the facility. They gladly accepted his invitation and visited MOB on July 25.

Congressman Byrne met and talked to some of the MOB NATCA members. The visit helped enlighten the Congressman and his staff about what goes on “behind the scenes” and how the air traffic control system operates. The staffers commented a couple of times in the TRACON that the visit was one of the coolest things they had ever done. The staff also stated that they wanted to come back on their own time to visit again when they could stay longer.

“I would encourage all FacReps to reach out to their local leaders and attempt to educate them on our profession,” Englestead said. “Most would probably have no idea what we do 24/7, 365 days a year.”

On Aug. 7, the Maine Democratic Party hosted its annual Muskie Lobster Bake in Freeport, Maine. New England Regional Legislative Chair Andre Jean said, “It was a great success and a lot of fun. Multiple members of Congress, including Maine Democratic Congresswoman Chellie Pingree, were in attendance at this event to meet with their constituents for lunch and conversation.”

Balschmiter gave the tour and Kerr was also in attendance and available to help answer the Congressman’s questions.

What are you doing to be a NATCAvist at home? Send details about your efforts to NATCA Insider Managing Editor Sarah Zilonis, at szilonis@natcadc.org.