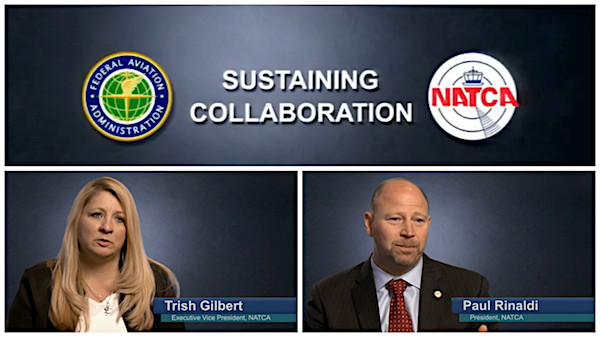 This is part 4 of 5 in a series about collaboration. Check back in a future NATCA Insider for Part 5, set to feature Region X.

Ingraining collaboration into the fabric of the work environment has been a major goal of NATCA and FAA leadership.

“We want to make sure that when we are all gone, that this new generation and those that follow us are very comfortable in a collaborative culture,” says Gilbert during the video.

Transitions become much easier when everyone is comfortable practicing collaboration every day. Bristol points out in the video that when people vacate a position or transition somewhere else, others are able to move in and fill the gaps seamlessly because it’s just the way that everyone works. Whether it’s a FacRep, Manager, or air traffic controller, everyone must dedicate time to making collaboration work.

Biggio describes the desired effect of creating a collaborative environment as sustainable behavior. If collaboration is the default and becomes part of every employee’s DNA, controllers that follow will pick up on those cues and ingrain it from day one on the job. This creates a sustainable and strong work place for all employees.

“It’s very important that we carry this forward,” says Hansen. “We don’t let it die. If we stop doing it, we’ve lost. So even if when you feel like everything’s broken down – you have to pick up and move forward and pass that along to the next person behind you.”

As more generations of air traffic controllers reach certification and move up in leadership ranks, the more important a strong foundation of collaboration becomes. Putting in the work now will benefit future controllers and the aviation industry.

Arel explains that if everyone can ingrain collaboration into his or her culture, it will become second nature and go a long way towards protecting the future of the National Airspace System.

The timing of these videos couldn’t be better, as the success of NATCA-FAA collaboration is displayed once again with the new ATC/TMC/FSS/NOTAM contract, which was signed on July 14 and took effect on July 24. The contract team became the first to establish an article within the contract solely about collaboration. It incorporates all of NATCA’s collaborative principles and processes and will provide stability for the workforce for the next six years. Collaboration is not simply a memorandum of understanding. It is a practice that has been fostered by NATCA and the FAA for the last five years that is now memorialized by the contract.

“The signing of the contract memorializes our commitment to collaboration and acknowledges the long-term benefits that it provides to both NATCA and the Agency,” said Iacopelli. “The new contract is commensurate with the outstanding work that our members perform on a daily basis in support of the safest and most efficient airspace in the world.”

The video’s fundamental message is clear: It is important to learn and memorialize the principals of collaboration now and begin building the strongest foundation possible. A strong foundation will pave the way for interest-based bargaining to succeed in a collaborative work environment. NATCA and FAA leadership strongly believe that collaboration works and is the only way forward.

Watch the fourth video today and check back in the NATCA Insider for the fifth installment, about how Region X labor and management are succeeding at collaboration as well.