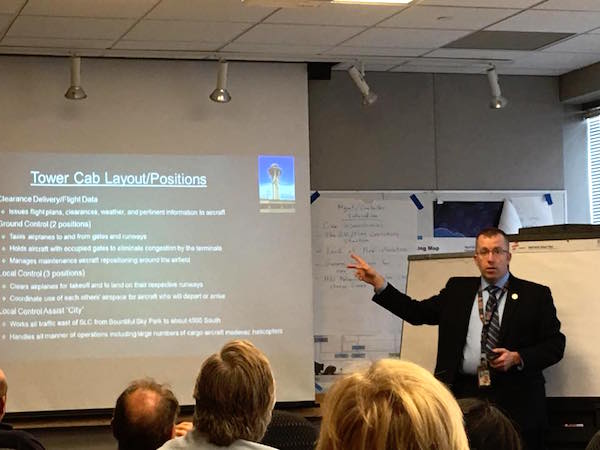 As we’re seeing here in Salt Lake City and in so many areas around the country, NextGen is making air travel better by making it safer and more efficient. Without collaboration between NATCA, the FAA, and all stakeholders, the U.S. airspace system — an economic engine for this country — would not have realized the many technological and procedural improvements NextGen is bringing. End users, like controllers, are the best suited to help with the design and deployment of new technologies. NATCA and the air traffic controller workforce we represent value our role as stakeholders and take great pride and responsibility in ensuring NextGen’s success.

So, you see why Data Comm is important to controllers as it ensures efficient and accurate communication, something NATCA stresses continually throughout the year, in all forums, and especially at our annual Communicating For Safety conference.

Also very important to both sides of the mic, tasks such as weather re-routing are improved greatly by Data Comm, saving time and even fuel.

While implementation of Data Comm is well ahead of schedule, it hasn’t come without its challenges. For example, before starting the aggressive implementation schedule that began around the first of this year, we had some real concerns with the plan that was developed to train the controller workforce on this new technology. In the ongoing spirit of collaboration, NATCA and the FAA worked jointly to deal with the challenge and found a solution to the training problems. NATCA reps and the air traffic controller workforce tackle all initiatives with a can-do attitude while ensuring they are done in a safe and meaningful fashion.

As I said before, controllers and other aviation safety professionals we represent who work with the technology every day have a vested interest in implementing improvements to the air traffic control system that enable us to better meet the highest safety standards. Through collaboration with the FAA, NATCA is working to ensure that the National Airspace System is prepared to meet the growing demand for aviation services while ensuring that changes enhance operational services, provide continued or improved safety, support and facilitate modernization of the NAS, are cost effective, and address and mitigate the impact on stakeholders.

“It’s a text conversation that we can have with the aircraft back and forth. So we can make multiple changes to it if we have to,” said Chris Bakke, a representative of the Salt Lake control tower.

The current industry standard for issuing flight clearances is a mix between pre-departure clearance and voice communication. Air traffic control sends a one-time message with the flight details.

“A sort of one time, text message to the airline’s company, not the aircraft itself,” said Bakke.

Visit KUTV for even more coverage of the event.