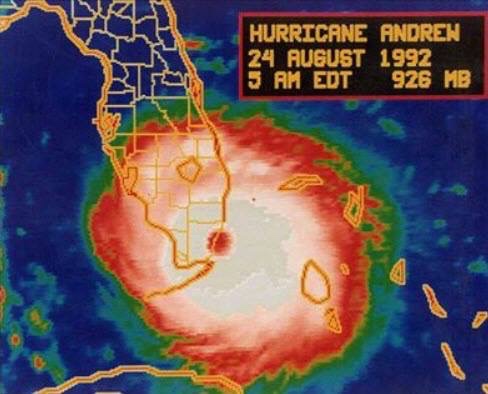 One of the most striking things that I remember from my experiences during Hurricane Andrew was getting off work after being on duty and living at Miami Center for more than 48 hours while the storm decimated South Florida.

When things finally slowed down enough to release people, we were told to go home and check on our residences and families and to be prepared to come right back to work because no one else was expected to report for duty. It wasn’t clear at that time, but the damage that had been done to South Florida was extensive. Dade County was beyond being called a mess and we had a large population of coworkers that lived right in the heart of the area that the strongest part of the storm had trashed.

As I walked out of the building and over the giant banyan trees that had been uprooted and made my way to my Jeep, I remember hearing the strangest animal sounds. Sounds that you would only expect to hear in zoos. At that time, there was a building adjacent to ZMA that used to house exotic animals during quarantine for import/export. That building had pretty much been flattened and of course, the animals had gotten loose. There were parrots, monkeys and I’m sure reptiles that I wouldn’t want to meet in the dark wandering around. This was not what I had expected to encounter but I remember taking it all in and thinking — so this is the kind of strange thing that happens after a storm.

I had imagined all night what the surrounding area would look like but I wasn’t quite ready for the reality of seeing it during the daylight. During the night, while the heaviest part of the storm was battering South Florida, I remember a few of us taking a break and opening a door to what we thought was a pretty secure area between two buildings at ZMA. We watched the rain blowing sideways at 145 miles per hour and telephone and light poles whipping down the street like sticks being thrown into a pond. Everything beyond the buildings had an eerie green glow. Bright, blurry flashes of light could be seen from hundreds of transformers exploding in the surrounding area but you couldn’t hear them. The sound of the wind drowned everything out.

Meanwhile, the water in the basement of the facility had reached flood level. I don’t recall being scared because I believed that the building could withstand the storm despite the water leaking in and the sides beginning to come off. It was obvious that daylight was going to reveal some very interesting and intense sights. I had no idea what it was going to look like in areas south of the center where the storm was the strongest.

While those of us at work sat and watched the storm on radar, many of our coworkers who were at home huddled in their kitchens, bathrooms and under stairs while their houses were slowly torn apart for hours on end. Many had to cover their families with mattresses while the rain poured in because there was no roof. I had never been in a hurricane before and so I never stopped to think about the fact that the wind and rain would continue for many hours. I thought that it was just a storm and that they come on you fast and leave you fast. I’m sure that those that were in their homes when the entire structure was ripped apart probably thought the storm would never stop. For them, I’m sure it was extremely frightening.

After grabbing some clothes, water, rope, a chain, and a compass, Ken Norberg and I headed south into Dade County to make contact with our missing people and assess their needs. This was before cell phones and handheld GPS units with maps. We navigated using paper maps, a compass, and a notebook with directions written down. What we didn’t know was that the farther south we went, there was not going to be any street signs, there would be no landmarks, and many of the directions that we had would not be usable because many of the streets were blocked with debris and fallen trees. The worst part was that it was predicted to rain again for the next couple of days so standing water was going to be an issue too.

The strangest sight we saw was in Florida City. The eye of Hurricane Andrew had passed through that area. As we drove along U.S. 1, the trees were blown to the west. Gas station awnings and metal buildings were blown over and leaning west. However, for about a half mile, it looked like someone had taken a giant vacuum cleaner and sucked everything up and spit it out in every direction. You could follow that path from the east to the west. This was where the eye had passed through.

Just beyond that area, everything was blown to the east. All along the way, you could see trees with plywood sheets driven into them yet there would be a car or house with nothing more than near scratches. At nightfall on that first night after the storm, you could see small campfires everywhere. People were huddled around the fires. For many, this was where they would live for an unknown length of time.

We found many of our coworkers that first day. Some were fortunate enough to still have a structure to stay in but many didn’t have a roof and some didn’t have walls. Everything inside their homes was soaked and dirty. Others had to leave the area because they had nothing.

In the weeks and months that followed, relief started pouring in from everywhere. During that time, many of us who had residences in Broward County that were not touched by the storm opened our homes for others to come stay. I lived in a townhouse with two roommates. Our place was three bedrooms and three baths. My roommates and I all started the academy on the same day and all travelled to ZMA at the same time.

During the first couple of months after Hurricane Andrew passed, we had over a dozen people living with us (all of the pets too). We basically set up a barracks in the living room and we all shared our beds in our bedrooms. We all worked shift work and so the laundry machines ran around the clock — as did the kitchen and showers. Despite all of the people and animals, we were able to sleep, eat, and get ready for work without bothering each other too much. It all worked out marvelously and without a doubt, it was one of the most fun times that I will ever have in my entire life.

Immediately after the storm hit, relief efforts began. It’s true that it was slow going at first but by the end of the third day, post-storm, we had supplies and resources coming to us from many places. There are way too many stories to tell about trying to drive a NASA truck full of relief supplies into Dade County. There was no power, no water, no navigation assistance, but plenty of armed looters, etc. I have a great deal of memories of those days and events but those are better left to talk about at the bar. What I want to leave you with is a picture that still comes to mind.

Somewhere in my old office at ZMA about six or seven years ago, someone laid a page on my desk from an old FAA publication that was produced shortly after Hurricane Andrew. On that page was a picture of former NATCA President Barry Krasner and retired member Greg Gish unloading a C-130 aircraft at Opa-locka Airport. In the picture, they were passing gallon containers of water to each other for loading into one of the NASA relief trucks that had been loaned to ZMA for relief efforts.

Barry had a lot of hair back then and Greg looked like his usual self with a big smile on his face. It was probably 115 degrees in that C-130 and the humidity was probably close 75 percent. The mosquitos were out in full force and it was raining. To say the least, it was miserable. Yet, here was NATCA! Our leaders and members were doing what they do best each and every day. They were looking out after NATCA members in need without regard for their own comfort or satisfaction. These are the same people that run to the fire to see what can be done to help. They don’t run away or wait to see if someone else is going to do it. These are the same people that watch out for me and my well-being each and everyday while they watch out for my family and the flying public.

I was just a young trainee then. Although my father had been a member of PATCO and I had been a NATCA member from the first day that I could join, I didn’t really understand what it meant to be a NATCA member or truly what it meant to play a role in our great Union. The examples given to me over the years, by people like Barry and Greg (and a host of others), will forever cement in my mind what NATCA is all about — people.

I wish I could find that old page with that picture on it. I’d like to share it with you. While that picture was black and white, it was quite remarkable to be there to see the real thing in color. While I don’t remember that picture being taken, I remember that day well (I guess that means I’m old) and I remember the efforts of my brothers and sisters to help others who were in need.

So, every year on this date, I stop and remember that time when Hurricane Andrew came to town. I remember all that was lost, but I’m reminded that it is truly the people that matter and that for me is what it’s all about: the people.