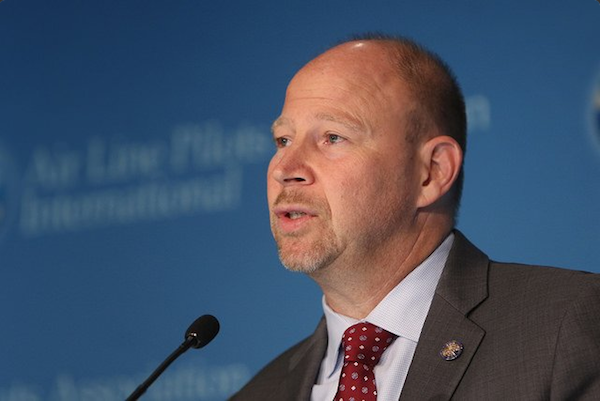 “We are thankful to have a collaborative friendship with ALPA on all aviation things and all labor things,” Rinaldi said, noting that he and Canoll work together often, including serving on the NextGen Advisory Committee and the AFL-CIO Executive Council. “Together, NATCA and ALPA have continued to accomplish amazing things every day in the National Airspace System (NAS). We truly have a great partnership.”

“Together, we are the front lines of air travel,” Canoll said. “We are the boots on the ground and we have first-person perspective of what will work, why it will work, and, very importantly, why an idea won’t work. Our paths are naturally converging on many things.”

The air traffic control system choreographs approximately 7,000 aircraft at any given moment, making it the most complex system in the world. Rinaldi said that’s rarely a thought on the minds of the millions of travelers who rely on the system every day – now nearly 900 million annually, up five percent in just the past year.

“I’m one of them and I thank the professionalism of the pilots,” said Rinaldi, adding that he never has to worry about safety while in the air “because I know we have your back and you have our back. And that’s exactly how we want it, the pilots and the controllers on the front line, and the passengers don’t really think about the safety of the system. It’s just a given that they will always be safe.”

But while affirming that commercial aviation has never been safer, Rinaldi cautioned against complacency or resting on our accomplishments of the past year or saying that we are “good enough” as a NAS.

“Complacency is the enemy of progress and good enough is the demise of greatness,” Rinaldi said. “The status quo, as where we sit today, is completely unacceptable moving forward in the future. We have so many challenges ahead of us with no easy solutions.”

Challenges affecting both controllers and pilots include Unmanned Aircraft Systems, training, and staffing.

With a projected doubling of aircraft in the system by 2034 and rise in passengers total to 1.2 billion annually in that time, Rinaldi asked, “What will give first? Will it be staffing of controllers and pilots? Will it be the FAA’s antiquated equipment, its aging infrastructure, or its outdated procedures? What will our sectors look like when we choreograph 9,000 flights at any given moment? What kind of pressures are the controllers going to be under, resulting in pressure in the cockpit? How saturated will the sectors be? What equipment will we rely on to keep the skies safe?”

We want to see the system grow, Rinaldi said, but the system must modernize effectively to accommodate that growth. Among the modernization shortfalls currently that affect the system is the fact that U.S. controllers still have to do 2.4 million manual handoffs with their Canadian counterparts.

“Automation should do that,” Rinaldi said. “It’s very time-consuming and very distracting. Our brothers and sisters in Canada have the technology. They’re just waiting on us. We’re trying to do it, but funding is standing in the way.”

The lack of long-term, stable funding remains the most serious threat to the future of the system, Rinaldi said, citing the 2013 sequestration budget cuts that set controller hiring efforts back for a full year and helped cause the current controller staffing crisis, which is now marked by a 27-year low in fully certified controllers. Continuing efforts to work with Congress to achieve stable and predictable funding, he added, reflect a desire to do what is best for the safety and growth of the NAS and also protect the aviation safety workforces that maintain it.

Canoll lamented the fact that Congress this year could not pass a long-term FAA reauthorization bill, settling instead to “simply kick the can down the road again.” He commented on the importance of putting safety first in any FAA reauthorization that changes the air traffic control system.

“No matter what the shape a reorganized air traffic control system might take, the most important, by far, element is the system has to be safe and be able to avail itself of a stable and a sustainable source of funding,” Canoll said. “Our industry deserves the investment. This country needs this investment that will propel us into the next generation of air traffic control.”

Canoll reaffirmed ALPA’s commitment to its vision of safety.

“We will continue to provide the public with special representation, busting into government-industry huddles, to ensure that aviation remains the safest form of transportation the world has ever known,” Canoll said.