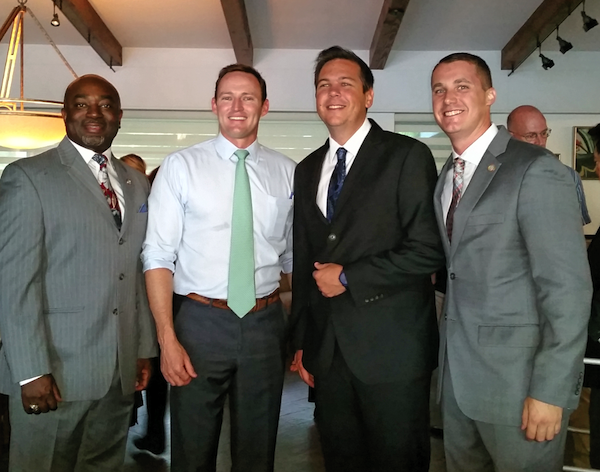 NATCA in Washington 2016 was a huge success and individual efforts to be strong advocates for this great Union continue at facilities throughout the country.

“It takes immense attention to detail and dedication to go to work at the Washington Center and ensure each flight gets to its destination safely and efficiently and we saw firsthand the technology these air traffic controllers use to succeed in that mission,” she said in a Facebook post detailing the event.

Nantucket Tower controller Carrie Cassano and New England Region Legislative Rep Andre Jean represented NATCA at the event. They spoke with members of Congress in attendance on the many issues important to NATCA, including the effects of low staffing and the need for stable funding of the National Airspace System (NAS).

Last Thursday, Burlington ATCT (BTV) FacRep David Schmitz gave a facility tour to legislative aide Megan McNamara from the office of Congressman Peter Welch, D-Vt. McNamara advises the Congressman on transportation issues. Facility tours like this are a great way to build relationships with members of Congress and educate them on the service air traffic controllers provide to the public.

McNamara had never been on a tour of a facility before, so Schmitz explained to her how the National Airspace System (NAS) works and the service that BTV provides to the residents of Vermont. While on the tour, Schmitz also brought up the low staffing numbers across the country and the need for stable and predictable funding of the NAS.

Hoyer briefed attendees on Congresswoman Tsongas’ work in Congress, the upcoming elections, and the possible actions Congress will take regarding the end of the fiscal year on Sept. 30. While there, Devine and Kean were able to talk to both members of Congress about issues important to NATCA, like staffing shortages and stable funding of the NAS.

Congresswoman Ann McLane Kuster recently hosted her annual Labor Community Happy Hour in Concord, N.H. NATCA was in attendance, represented by Boston TRACON FacRep Curt Fischer, Boston Center controller Jay Bowers, and New England Legislative Rep Andre Jean. The Congresswoman gave a great update on the latest in Washington, D.C., and on her campaign. Afterwards Fischer, Bowers, and Jean had a chance to speak with her about several issues facing NATCA, including the staffing shortage and stable funding for the NAS. They also thanked her for her support on H.R. 5292 and the FAA funding extension.

After the control room visit, Dr. Bricker and two other NATCA representatives, ZAB Safety Rep Nate Johns and East Area Rep Derek Bray, visited with Congressman Lujan and his staffers. Discussion centered on staffing at the facility and the efforts to move Santa Fe airport from ZAB airspace into Albuquerque Approach’s airspace.

Congressman James Langevin, D-R.I., hosted his annual “Evening at Fenway Park” event where he met with constituents and other members of his community. Legislative Rep Andre Jean and Providence ATCT controller Jim Dunlap represented NATCA at this New England Region event. Jean and Dunlap had a good discussion about staffing and the recent FAA funding extension. Congressman Langevin was one of the many members of Congress that co-sponsored H.R. 5292 and they were able to thank him for his support on that legislation.

Houston Center controller Johnny Temple recently represented NATCA at an event hosted by Congressman Al Green, D-Texas. Several unions were represented at the event where Congressman Green gave a presentation on several policy issues including his strong support of labor, saying that good paying jobs are what the American dream is all about. After the presentation, Temple was able to speak with the Congressman about several issues facing NATCA.