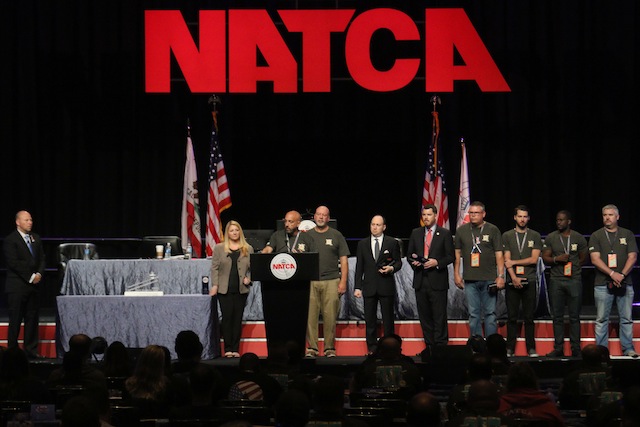 Sept. 9, 2016 // Convention: Spotlight on The Architects of the Slate Book

“I wanted to continue to build on the road of success and collaboration that NATCA and the FAA have developed over the past several years, and continue to move the Agency forward and continue to grow aviation in this country,” he said.

The contract team became the first to establish an article within a contract solely about collaboration. It incorporates all of NATCA’s collaborative principles and processes and will provide stability for the workforce for the next six years. Collaboration is not simply a memorandum of understanding. It is a practice that has been fostered by NATCA and the FAA for the last five years that is now memorialized by the contract.

“Most of the changes you will see in the contract really reflect just a change of acknowledging the way we have been working for quite some time,” Federal Aviation Administration Air Traffic Organization (ATO) Chief Operating Officer Teri Bristol said.

Interest-based bargaining was a leap of faith, Rinaldi said, but there was trust in collaboration on both sides.

The result, Iacopelli said, was a big step forward in the parties’ relationship.

“In this case, we worked our way through a term agreement for over 14,000 employees without requiring the outside assistance for arbitration or even mediation,” he said.

NATCA and the FAA developed processes to ensure collaboration at the national, regional, and local levels, setting the stage for the successful contract negotiations.

The NATCA membership ratified the contract with the highest percentage of any collective bargaining agreement in the Union’s history: 98.32 percent.

“It’s the first voluntary agreement in nearly two decades,” said FAA ATO Vice President Tim Arel, “That’s pretty significant in and of itself. But I think it speaks volumes about the maturity of our relationship and about how far we’ve come in reaching a common understanding.”

“I think the truth is, both sides won,” Iacopelli said.