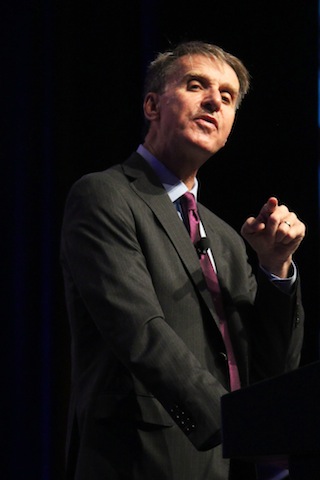 On Thursday, Sept. 1, Transportation Trades Department (TTD), AFL-CIO President Ed Wytkind addressed the convention body. His remarks focused on the day’s theme of community service, and began by congratulating NATCA on the success of the NATCA Charitable Foundation. He then moved on to discussing the national discourse about federal employees, noting the disturbing habit of those who levy nasty attacks on working people but then rely on those same people to help those in need or who have suffered in a natural disaster.

Helping people, he said, “has been what the labor movement is about for a long time.”

“I find the discourse of our politics to be disgusting and it’s often hurled at the people in public service,” he added. “They don’t call first responders public servants. They call them faceless bureaucrats. Somehow the wages are too high and pensions too lucrative and job protections too strong.”

“When NATCA members were not sitting around as an overpaid bureaucrat, they landed every flight safely without a single incident,” he said.

Wytkind detailed the current political environment in Washington, D.C., which he said is marked by continued animosity toward labor. His message to legislators is simple, he said: “If you want to help us, stop trying to destroy the bargaining rights of our members.”

He added, “Public promises and fairy dust aren’t getting us to solutions we need for transportation.”