The Air Traffic Control Association (ATCA) this week announced the recipients of its annual awards and NATCA is proud to congratulate its members who are among this list of outstanding air traffic controllers.

This week’s news follows ATCA’s previous and very exciting announcement last spring that it has awarded its highest honor, the Glen A. Gilbert Memorial Award, to NATCA President Paul Rinaldi. That award will be presented to Rinaldi on the evening of Oct. 19, at a special banquet to close ATCA’s 61st Annual Conference and Exposition at National Harbor, Md., just south of Washington, D.C.

ATCA will present its other awards during a luncheon on the first day of the annual conference, Oct. 17. The NATCA members who will receive these awards are listed below, along with a summary of their excellent work. The NATCA Insider will provide full coverage of each recipient and their stories in the Oct. 21 issue. 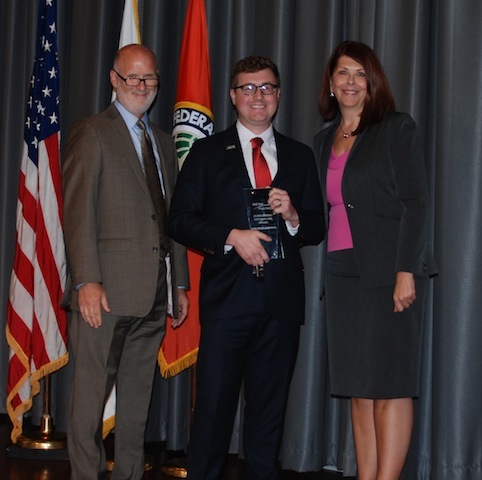 Stoffer had a great flight assist in April that ensured the safe landing of a Cirrus pilot. After winning a Federal Aviation Administration (FAA) Air Traffic Organization (ATO) Award in August for the same flight assist, Stoffer (shown above, between FAA ATO COO Teri Bristol and Deputy COO Randy Park) said, “the pilot did a great job staying calm in a tough situation. Burlington sector at Chicago Center was a huge help by working the other aircraft in my airspace so that I could focus on the Cirrus alone. Peoria Approach helped me formulate my plan in the event the Cirrus couldn’t make ground contact with Kewanee or GBG (Galesburg) and they kept me abreast of the weather in their area. They located an airport in their airspace that had VFR conditions and was safely in-range for the Cirrus. When I relayed this information to the pilot, I believe he felt he was in less of a dire situation and was able to remain focused. I can’t thank either facility enough and I’m not sure that situation would have ended the way it did without their help.” 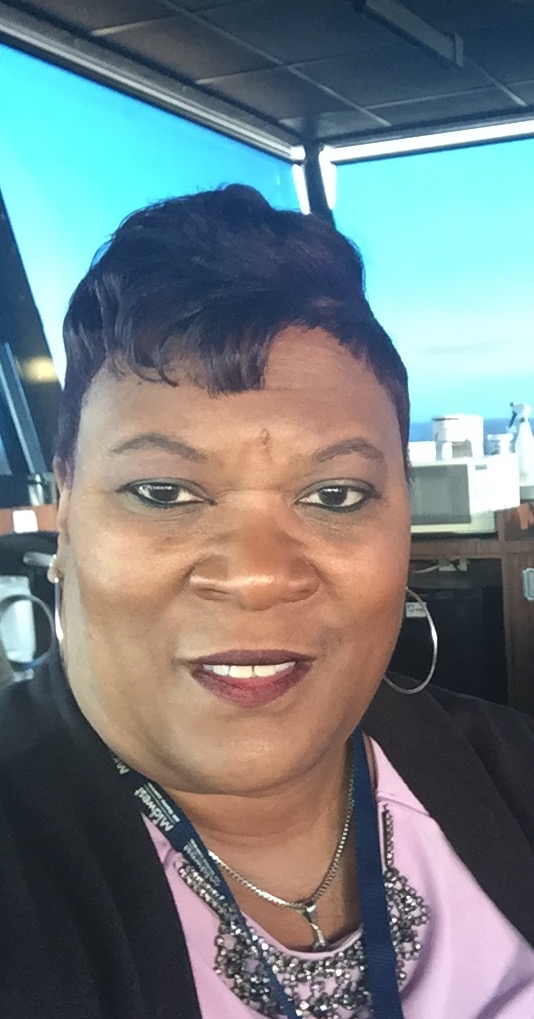 Martin is a retired NATCA member who used to work at Port Columbus and Detroit ATCTs. Martin now works at Capital City Federal Contract Tower (CXY) near Harrisburg, Pa. Martin’s professionalism and acute attention to detail prevented a potentially catastrophic event during inclement weather and low visibility while working the local control position. The runway incursion happened on a January morning while Martin was on duty as the local controller. The tower visibility was extremely limited due to heavy, blowing snow. To complicate the matter, the truck was white and blended with the snow and the surrounding background area. 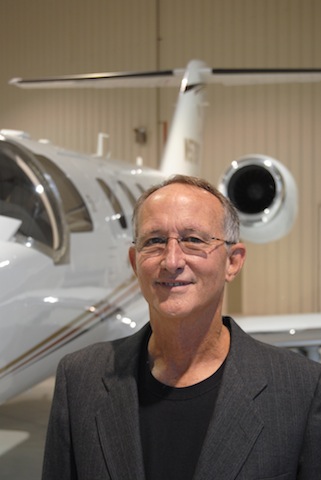 GTU is an RVA-run FCT represented by NATCA. In its award nomination, RVA wrote, “Mr. Thomas leads by example, is a true team player and his performance exemplifies a professional Air Traffic Controller. Mr. Thomas captures the true spirit of RVA and demonstrates it in both his professional and personal life. During the 2015 calendar year, Mr. Thomas prevented an aircraft without landing gear from landing and twice prevented runway incursions or collisions due to disregarded instructions and landings without clearance from Air Traffic Control.” RVA added, “For the past several years, Mr. Thomas has been volunteering as a ‘donation area worker’ at the Caring Place. The Caring Place is similar to Good Will and accepts donations from individuals to pass on to sell at their thrift shop to assist the less fortunate in the Georgetown, Texas area.”

Pilot Cathy Lewan circled the Atlanta area on Feb. 14, 2016, starting a normal day in her single-engine Cessna to take aerial pictures for her professional photography business. But then the unthinkable happened: The plane’s throttle cable broke and got stuck in near-max power setting when Lewan was flying about 10 miles south of Hartsfield-Jackson Atlanta International Airport, in some of the world’s busiest airspace. Fortunately for Lewan, a team of air traffic professionals at Atlanta TRACON (A80) responded to her call and guided her to a safe landing. It was the first time ever that a single-engine aircraft landed at Hartsfield after declaring an emergency — one that lasted 50 minutes. 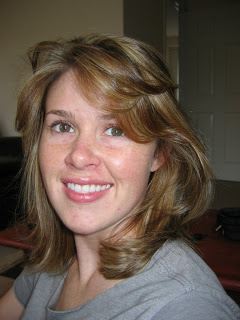 On Jan. 19, 2016, Hermsdorfer was working Trails low altitude sector. There were IFR weather conditions across the sector. N113WB departed New Century AirCenter, Olathe, Kan. (IXD), to do holding and practice approaches at Emporia, Kan. (EMP). When returning to IXD, N113WB encountered severe icing and was unable to hold an IFR altitude. Hermsdorfer offered the pilot nearby airports as alternatives, but at the time, the pilot advised that he thought he could make it back to IXD if he could get below the clouds. Hermsdorfer quickly gathered information about other airports that she relayed to the pilot. Despite Hermsdorfer’s efforts and attention to detail, N113WB was not able to make it to the airport, but was able to land in a field about one mile short of the runway, avoiding injuries to all on board.

Madsen and McGreevy worked a VFR aircraft that was stuck on top of clouds and also dangerously low on fuel. The pilot was not IFR qualified. The controllers relayed information about a closer airport than the one at which the pilot intended to land, Dubuque. They relayed weather information, including real-time cloud and ceiling conditions. When the pilot stated that he could see the ground through a few thin spots in the clouds, McGreevy drew on his own piloting experience to assist the pilot in setting up and then safely executing his landing.

ZMA’s Spotlight on Safety was conceived by the Local Safety Council as a way to bring together controllers and pilots to promote open, candid communication. Attendees included representatives from surrounding ATC facilities, airlines, and general aviation. They were encouraged to share their perspectives on common aviation safety concerns. Local safety councils look for trends that can point to potential breakdowns in the safety of the National Airspace System. The council was led by April O’Connor for FAA management, and Christopher Herbert for NATCA. They executed the event based on discussions with controllers during safety briefings. 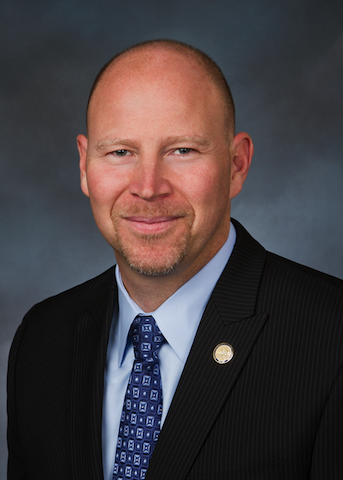 Rinaldi was notified in May that he was selected as the 2016 recipient of the prestigious Glen A. Gilbert Memorial Award, one of the most significant awards in aviation and ATCA’s highest honor.

The Glen A. Gilbert Memorial Award is dedicated to the memory of one of the “Fathers of Air Traffic Control” and honors the lifelong achievements of an individual in the field of aviation. Glen Gilbert was a visionary who, along with Earl Ward, founded the U.S. air traffic system and dedicated his professional career to its improvement.

ATCA wrote in its announcement of the award:

“As the president of the National Air Traffic Controllers Association (NATCA), the federal labor union representing aviation safety professionals at the FAA, DoD, and within contract towers, Mr. Rinaldi has displayed an exemplary career-long commitment to the betterment of the National Airspace System. In accepting the Glen A. Gilbert Memorial Award, Mr. Rinaldi joins aviation greats, including the Hon. Jane Garvey and the Hon. Najeeb Halaby, Capt. Elrey B. Jeppesen, former Transportation Secretary Norman Mineta, and pilot A. Scott Crossfield.”

The list of winners now includes Rinaldi’s name, something he said is overwhelming and for which he is deeply honored.

“I can’t even process it, that my name will be there,” he said. “This is validation of a great many activists in our Union who are working day in and day out. It’s also a testament to Trish Gilbert and to our National Executive Board. The vision we have had is moving forward and becoming a different kind of union. We have worked to protect the National Airspace System, modernize the system, and ensure that the people running the system are taken care of too.”

“To be on this list and now be compared to these names of the most notable and influential people in our industry’s history is really such a big deal and so great!” she said.

For more information about the Glen. A Gilbert Memorial Award, please click here.

To follow news and discussion about the award, please visit these links: