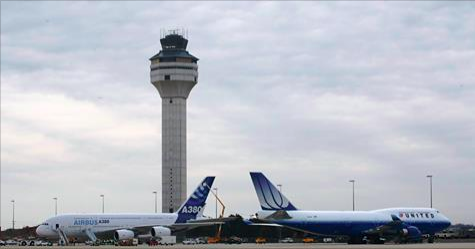 At a media event on Sept. 27, members from NATCA, the Federal Aviation Administration (FAA), United Parcel Service (UPS), United Airlines, the Metropolitan Washington Airports Authority, and Professional Aviation Safety Specialists (PASS) gave their perspectives as part of a commemoration of this great achievement. Attendees saw Data Comm in action during a tour of the air traffic control tower.

According to an FAA press release, the FAA demonstrated how NextGen technology enhances safety and reduces delays by providing text-based messaging capabilities between air traffic controllers and pilots.

IAD controller and NATCA local secretary Sharlotte Yealdhall described that controllers were so happy with the technology, they were sad to see it shut off for the event. According to Yealdhall, the advantages of Data Comm have made a huge impact in the working environment, making controllers more efficient.

Data Comm technology utilizes existing equipment in many aircraft, enabling air traffic controllers and pilots to send and receive flight information using digital text-based messages. Controllers at towers with Data Comm can now type text flight departure clearance instructions into a computer and push a button to electronically send the critical information to the flight deck where the information can be viewed. Then, with the press of a button to confirm it has been received, entered into the aircraft’s flight management system.

In addition to easier information sharing, time savings is another major benefit of Data Comm. According to the FAA press release, when pilots read back a series of complicated waypoints in a clearance with even one mistake – called a “readback/hearback” error – they must repeat the instructions until they are correct. Voice communications can take two to three times longer than that, taking even more time as traffic increases.

Data Comm’s electronic transmissions will help avoid delays. This time savings benefit will be especially apparent during bad weather. Data Comm-equipped aircraft will be able to take off before an approaching weather system closes the departure window, while aircraft relying on voice communications will remain stuck on the ground.

According to FAA Administrator Michael Huerta, Data Comm is expected to save operators more than $10 billion and the FAA about $1 billion in future operating cost over the 30-year life cycle of the program.

Data Comm is revolutionizing airports all over the country with its departure clearance services. It’s projected to be operational at 56 airports by the end of the year. Then, Data Comm will expand to en route airspace, an initiative scheduled to begin in 2019.

Data Comm is currently operational at the following airport towers: