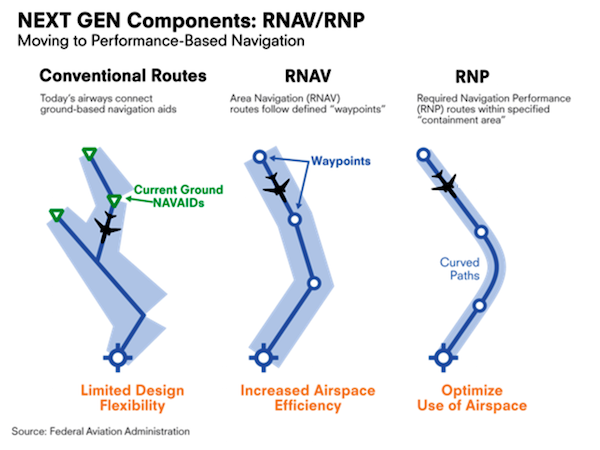 On Sept. 29, Project Management Organization (PMO) Rep Jeff Woods spoke on a Performance Based Navigation (PBN) Panel at the Avionics for NextGen Conference at a hotel near Washington Dulles International Airport.

The panel discussion provided information on how NextGen programs are continuing to work with operators to implement PBN procedures to reduce fuel burn and flight times while saving operational costs for airlines and individual operators.

PBN is a NextGen program that aims to streamline flights and conserve fuel within the National Airspace System (NAS). PBN is composed of Area Navigation (RNAV) and Required Navigation Performance (RNP) and describes an aircraft’s ability to navigate using performance standards. RNAV enables aircraft to fly on any desired flight path within the coverage of ground or space-based navigation aids, within the limits of the capability of the self-contained systems, or a combination of both capabilities.

PBN has been implemented across the country according to a roadmap established in 2003 developed to facilitate long-term planning for a complete transition to this new technology. The plan comprises a 15-year strategy divided into five-year terms that outline infrastructure and equipage updates. Woods added that this strategy also talks about the need for Decision Support Tools (DST) to increase the utilization of PBN.

When looking at any change in the aviation system, safety is always the biggest concern. With the many challenges facing the NAS, including unpredictable funding, it grows increasingly difficult to roll out new, increasingly automated programs like PBN, but that hasn’t stopped the demand for capabilities that improve procedures and programs for the workforce.

NATCA Director of Safety and Technology Jim Ullmann notes that air traffic controllers are good at making things work, but they face some of the same issues that users do when implementing new technology, like predictability, especially at high-volume airports. Predictability in equipage is important because the more aircraft there are in line for an approach that can’t use updated procedures, the more complicated it becomes to work traffic in that area.

In addition to equipage, training is an issue because as new technology is implemented, airspace is being compressed. Having a just culture and the ability to share safety-related information both nationally and abroad without fear becomes more important than ever — something that can only be accomplished through a predictable funding stream.

By coming together to speak on the issue, Woods and the panel demonstrated that collaboration continues to be key moving forward. Woods explains that controller involvement from the ground floor up has proven valuable and he believes it is the best chance for continued success.