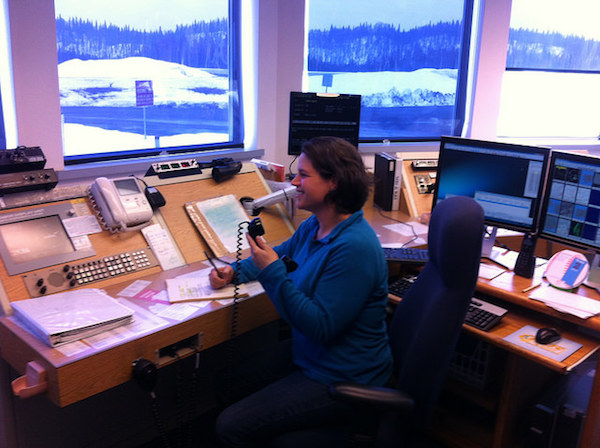 FSS FACILITIES: The three parent facilities provide 24/7 coverage and administrative functions. The rotational facility has staffing and management responsibility for five remote stations. There are 11 year-round, part-time facilities. There are also three seasonal facilities in the summer months only.

AIRSPACE: FSS specialists in Alaska are responsible for a land area about the size of Mexico or Mongolia.

FSS PROCEDURES: While the procedures provided at FSS facilities are generally standard across the country, there can be great diversity between stations due to geography, airspace and types of aircraft movements. A typical example of an FSS is a station in Class E airspace surrounded by uncontrolled airspace with a mix of commercial and general aviation traffic. The FSS coordinates with ATC regarding IFR operations.

FSS AREAS: Areas surrounding some Flight Service Stations are more complex due to geographical location and a more diverse airspace structure. In Alaska, there are coordination calls between ZAN and Alaskan FSS. There are letters of agreement that allow continuous use until the center needs the airspace. Also, FSS can have multiple aircraft on visual separation.

RECENT INTERNATIONAL RECOGNITION FOR NATCA: Trottini recently traveled to the U.K. for an international flight service conference where he gave a presentation about FSS in the U.S. and the Alaskan FSS in particular.

“This organization was made up of 20 countries including all of the European Union and limited to 70 attendees,” Trottini said. “My 15-minute presentation turned into a 45-minute question and answer session. Every break, I was cornered by each nation and was asked questions on how we do business.”

He continued, “I also spent quality time with the CAA (UK), EASA, NAV CANADA, CATCA, GATCO, and many other governmental, private, and union organization representatives. We also had breakout sessions on phraseology, training requirements, and certifications. NATCA and NAV CANADA were seen as the major resources for the EU in helping to set up the way they will be doing business at the seminar.”