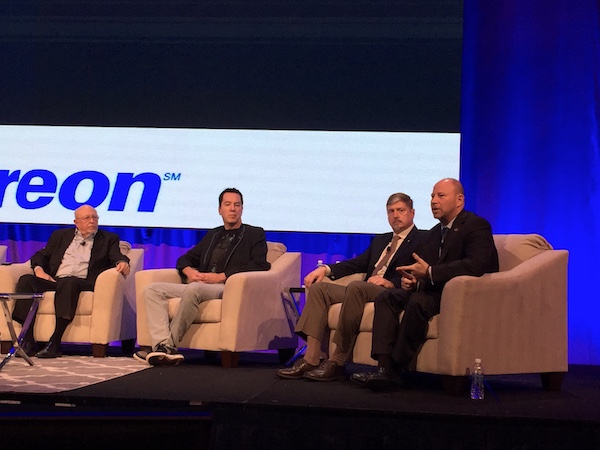 Cass, Hatton, Lamond, and Thurling opened discussion by explaining the business models behind their organizations. All agreed that the NAS should be moving away from a predictive capabilities-only model to a preemptive way of running the operation to reduce disruption to the system. This would enable users to plan long-term, invest in new technology, and integrate that technology at a rapid pace.

The second half of the panel featured Rinaldi and Smiley describing the current state of the NAS and how those business models fit into the system. Rinaldi cautioned that while great strides have been made, the NAS is still operating at an exceptionally slow pace set by bureaucratic red tape all stakeholders face at the hands of the budgetary process.

“The FAA is stretched as far as they possibly can with the budgetary restraints that they have and we’re relying more on industry,” said Rinaldi. “We’re stretched thin and now we’re saying new users are going to come in and we’re saying that we will be more dynamic as an agency.”

He continued, “It’s taken years to get old technology into the NAS because that’s the way the system works and until we can actually say we want to build a better, more dynamic aviation system, we’re going to struggle with implementing modern technology and new entrants into the NAS.”

Thurling described the slow pace as a challenge for Unmanned Aircraft Systems (UAS). Integrating this technology safely into the NAS is a priority for both industry and the FAA. However, the technology is advancing at such a rapid pace, the current protocol for handling UAS is unable to keep up. He feels that everything from weather programs to “one pilot one aircraft” policies are behind and have prevented the exponential growth of which UAS is capable.

Panelists discussed the need to keep things moving forward and agreed that strategic goal-setting is the best way forward. Hatton explained that the future of SpaceX will require a more dynamic NAS, capable of integrating new technology quickly and efficiently.

“The NextGen Advisory Committee is the perfect example of having a strategic goal,” said Rinaldi. “You look at what your resources are, what you can accomplish, and how you can get it done. That sets goals for the FAA. The FAA has great people that work there but I’m looking at the structure. As we are dynamically changing through technology, we’re still in an antiquated structure. We need to figure out a streamlined structure.”

Rinaldi explained that a streamlined structure should include predictable funding for the NAS and the ability to develop and integrate technology at a faster pace without compromising safety.