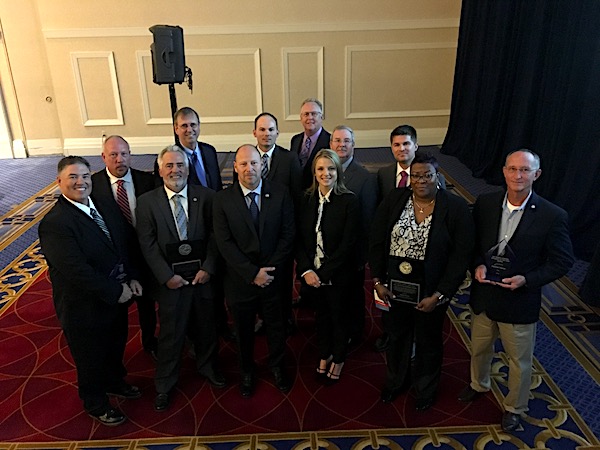 For more information on the winning events, read the NATCA Insider article.

Andrea Martin, Midwest Air Traffic Control Service, Inc., Capital City, Pa., FCT
“The save I am being recognized for is truly an affirmation of the necessity of the human factor needed in the air traffic system to provide a safe environment for our users,” said Martin. “ We are there to provide a service to the flying public and keep the system safe.”

“I’d like to thank everyone at ATCA, Midwest, the company that I work for currently, and NATCA,” she said. “I’m a retired RNAV member and charter member of that organization.”

“I feel honored for getting an award for doing my job,” she added. “I’ve had the opportunity to work for a fantastic company that gives us an ability to connect and give a human factor to the aviation community. I’m very proud to have this after all these years.”

Mark Stoffer, Milwaukee ATCT (MKE)
Stoffer recently transferred to MKE from Moline (MLI), where he performed the flight assist in April for which he was honored by ATCA. He was unable to attend the luncheon due to his training at MKE. NATCA Director of Safety and Technology Jim Ullmann accepted the award on his behalf.

Stoffer headed a flight assist in April that ensured the safe landing of a Cirrus pilot. In August, the FAA Air Traffic Organization also honored Stoffer. At that time, he said that while it is an honor to receive an award, “I can’t help but think about all the other flight assists that go unnoticed around the Agency. While recognition is appreciated, it is not one of the driving motivators for myself or, I think, my brothers and sisters in NATCA. I’d like to share this award with anyone who did something special without anyone noticing.”

The Cirrus pilot was trapped on top of a cloud layer. Stoffer provided weather information, remained calm, and developed a course of action.

“The pilot did a great job staying calm in a tough situation,” said Stoffer. “Burlington sector at Chicago Center was a huge help by working the other aircraft in my airspace so that I could focus on the Cirrus alone. Peoria Approach helped me formulate my plan in the event the Cirrus couldn’t make ground contact with Kewanee or GBG (Galesburg) and they kept me abreast of the weather in their area. They located an airport in their airspace that had VFR conditions and was safely in-range for the Cirrus. When I relayed this information to the pilot, I believe he felt he was in less of a dire situation and was able to remain focused. I can’t thank either facility enough and I’m not sure that situation would have ended the way it did without their help.”

The ATCA Air Traffic Control Specialist of the Year Award
This award is presented to an individual civilian air traffic control specialist who has, during the previous year, performed in an exemplary or extraordinary manner in support of ATC (an award is given in each discipline: en route, terminal, and flight service facilities).

Shannon Thomas, Georgetown, Texas FCT (GTU)
GTU is an RVA-run FCT represented by NATCA. In its award nomination, RVA wrote that Thomas is a leader and a true team player. Thomas prevented an aircraft without landing gear from landing and twice prevented runway incursions or collisions due to disregarded instructions and landings without clearance from air traffic control in 2015.

“Thank you ATCA, thank you Robinson Aviation, you’re a great company to work for,” said Thomas. “I’m humbled and honored to receive this award. I’d like to thank the Georgetown Tower folks and I’d like to thank my wife, who has been with me a long time. Elizabeth, thank you.”

The Chairman’s Citation of Merit Award Winners
This award honors an individual or group of air traffic controllers who went above and beyond when handling an emergency situation.

Patrick Burrows, Mason Braddock, Nichole Surunis, Keith Tyus, and Clay Sutton, Atlanta TRACON (A80)
Pilot Cathy Lewan started a normal day in her single-engine Cessna to take aerial pictures for her professional photography business when the plane’s throttle cable broke and got stuck in near-max power setting. Lewan was flying about 10 miles south of Hartsfield-Jackson Atlanta International Airport in some of the world’s busiest airspace. Air traffic professionals at Atlanta TRACON (A80) immediately responded to her call and guided her to a safe landing. It was the first time ever that a single-engine aircraft landed at Hartsfield after declaring an emergency — one that lasted 50 minutes.

“On behalf of friends and colleagues at A80, thank you,” said Burrows. “Congratulations to all award winners here today. Thank you all.”

Hermsdorfer was honored for her skill, professionalism, and quick reactions in helping a pilot of Piper PA-46 and the passengers onboard to a safe outcome on Jan. 19, 2016, after the pilot encountered icing. But Hermsdorfer said that while she is very honored, she feels a bit undeserving of such an award.

“I don’t know if I helped the pilot all that much, or if I was overburdening him with information,” she said.

Hermsdorfer was working Trails low altitude sector. There were IFR weather conditions across the sector. N113WB departed New Century AirCenter, Olathe, Kan. (IXD), to do holding and practice approaches at Emporia, Kan. (EMP). When returning to IXD, N113WB encountered severe icing and was unable to hold an IFR altitude. Hermsdorfer offered the pilot nearby airports as alternatives, but at the time, the pilot advised that he thought he could make it back to IXD if he could get below the clouds and avoid icing.

Hermsdorfer quickly relayed NOTAMs to the pilot and gathered information about other airports. Despite her efforts and attention to detail, the Piper was not able to make it to the airport, but was able to land in a field about one mile short of the runway, avoiding injuries to all on board.

“I was very grateful that my D-side, (ZKC member) Joe Moylan, is a pilot, and helped me provide information to the pilot,” Hermsdorfer said. “When we lost radio and radar contact with the aircraft, I was almost too choked up for my next few transmissions. Finding out he landed in a field and was okay was the best feeling ever.”

Steve McGreevy and Ben Madsen, Chicago Center (ZAU)
“Quick thanks to ATCA for the recognition, also to NATCA and especially our FacRep Toby Hauck,” said McGreevy upon accepting the award. “He always looks around our facility for people who go above and beyond. We certainly appreciate his looking out for special circumstance like this. I’d like to thank Ben again for his assistance during the incident and thank you again ATCA.”

Madsen and McGreevy worked a VFR aircraft that was stuck on top of clouds and also dangerously low on fuel. The pilot was not IFR qualified. The controllers relayed information about a closer airport than the one at which the pilot intended to land, Dubuque.

They relayed weather information, including real-time cloud and ceiling conditions. When the pilot stated that he could see the ground through a few thin spots in the clouds, McGreevy drew on his own piloting experience to assist the pilot in setting up and then safely executing his landing.

“These are the types of situations where the aviation community comes together and strives for positive results,” said McGreevy. “This pilot recognized the dire situation, and once he asked for help, we were able to utilize all the center’s resources at our disposal, and on the ground at the airport, to give him confidence to see the situation through to a successful landing.”

“My greatest challenge has been training at ZAU, with its increased workload and information,” explained Madsen. “My greatest success will be eventually becoming CPC in 2017. Air traffic control is the greatest job in the world! Every day is different — you never stop learning, and you continue to improve your skill and craft each time you sit down at the scopes.”

Miami Center (ZMA) Safety Council
The Local Safety Council created ZMA’s “Spotlight on Safety” as a way to bring together controllers and pilots to promote open, candid communication. Attendees included representatives from surrounding ATC facilities, airlines, and general aviation. They were encouraged to share their perspectives on common aviation safety concerns. Local safety councils look for trends that can point to potential breakdowns in the safety of the National Airspace System.

The council was led by April O’Connor for FAA management, and Christopher Herbert for NATCA. They executed the event based on discussions with controllers during safety briefings.

O’Connor attended the awards luncheon on Oct. 17 and accepted the award on behalf of the entire council.

“Thank you to my NATCA colleague Christopher Herbert,” she said. “The entire team was instrumental in accomplishing it. We are humbled and honored, thank you.”

The Local Safety Council is comprised of eight NATCA members, one from each operational area and a NATCA lead. It was formed in 2014 under the Partnership for Safety Initiative and now works to increase the safety of ZMA through peer-to-peer initiatives.