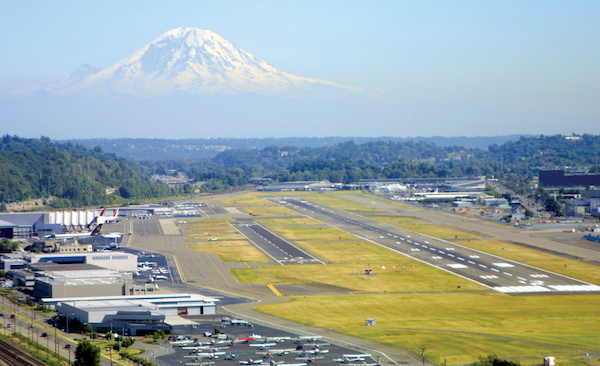 Boeing Field Tower (BFI) is a level 7 facility located four miles south of Seattle. It is home to 23 bargaining unit employees, of which 22 are proud NATCA members. The current tower was originally commissioned in 1962, but due to an exceptionally strong earthquake in 2001, reinforcements were added to ensure safety.

Controllers at BFI work closely with Seattle TRACON, SEA, and RNT as they guide a wide variety of aircraft in and out of the airport. According to FacRep Lindsay Carr, almost any aircraft you can think of can be seen at the facility.

“We have everything from H/B767 to ST75 Stearman biplanes,” she said. “We also have regularly scheduled taxi and cargo flights with Kenmore Air, Ameriflight and UPS as well as a healthy mix of Boeing test flights and smaller GA aircraft in the pattern.”

The constrained airspace at BFI sets the facility apart from other work environments. There are only 375 feet separating the runways, which can be quite a challenge combined with the mix of aircraft types coming in and out. Air traffic is also seasonal with the summer months being much busier than the winter due to the weather around the Puget Sound.

Plan A, unique to this facility, allows controllers to use visual separation between their final approach and SEA’s final which is directly over the airport.

“Each July, we have the pleasure of working with the Blue Angels and other participants when Seattle hosts Seafair, which includes an airshow over Lake Washington,” says Carr. “Our airspace also covers Safeco Field and Century Link Stadium so we routinely work TFRs over the stadiums when the Mariners and Seahawks have home games.”

As a smaller facility with a 24-hour schedule, it can be hard for the membership to host or plan their own solidarity events, but all encourage participation in regional events.

“We definitely have a NATCA culture at our tower,” says Carr. “Currently, we have many members who are willing to get involved and try new things. My favorite part about being FacRep is having the ability to educate my members and come up with alternative solutions that better serve the facility and controllers.”