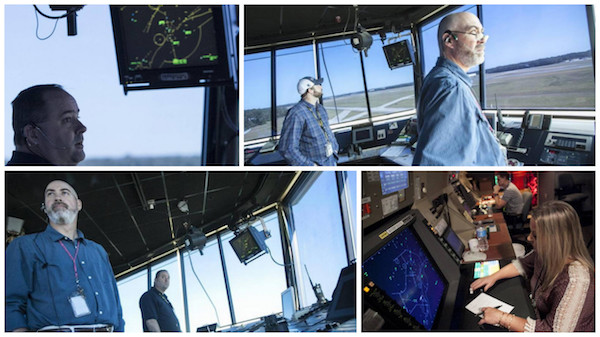 NATCA joined with the Federal Aviation Administration (FAA) on Wednesday, Oct. 26 to open the doors to local news media at Myrtle Beach (MYR) tower and TRACON and show off the new Standard Terminal Automation Replacement System (STARS), touting the great collaboration that took place during the successful installation.

Southern Alternate Regional Vice President Jason Arnold and MYR Air Traffic Manager Rickey Washington delivered opening remarks at the press event, which included a tour of both the tower cab and the TRACON.

“It was the efforts of professionals like NATCA’s Brandi Walker, managers Chris Ehresman and Mark Poisson and staff specialist Chip Hall that were important,” Arnold said during his remarks. “Many others played a role. It was a testament to what can be accomplished when we work together for the common good. Controllers were ready to work the equipment on Day 1. The prep work prior to implementation made a huge difference throughout the process.”

STARS is a key part of the Terminal Automation Modernization and Replacement program, improving the computer system used by controllers at terminal facilities to a single, state-of-the-art platform. STARS gives controllers a complete, precise picture of the airspace.

The FAA developed STARS and installed it at MYR in May 2016 in collaboration with NATCA and the Professional Aviation Safety Specialists (PASS).

“This successful installation effort stands as a true testament to what teamwork and collaboration can do to ensure the modernization of our facilities and equipment,” Arnold said. “NATCA is very proud of this partnership. We believe that working with the FAA and other stakeholders, like Raytheon and PASS on STARS, is critically important to advancing aviation throughout the country.”

“I share the excitement of all air traffic controllers here at Myrtle Beach about the introduction of new tools like STARS,” Arnold said in his remarks to the media. “These technologies will help us do our jobs in an even more effective and efficient way.”