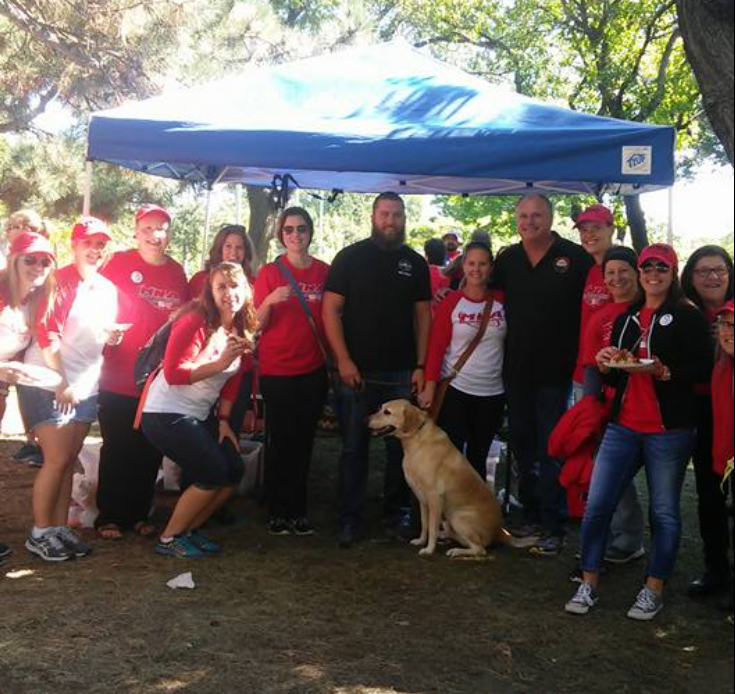 Nearly 5,000 registered nurses in Minnesota went on a labor strike over health insurance, safety, and staffing in both June 2016 and again for 37 days last fall. The nurses, from five Allina Health hospitals in the Twin Cities, went on strike with the Minnesota Nurses Association following a contentious nine-month contract negotiation.

Minneapolis St. Paul ATCT (MSP) Local NATCA Executive Board representatives Sam Tomlin (FacRep), Joe Czech, Jim Reed, Chris Hoag, and Thayer Davis proposed and voted to provide a meal to the nurses that, at the time, had been on the picket line for over two weeks. Tomlin, along with NATCA member Blake Hreha, hand delivered pizza to two area hospitals to show strength through solidarity to a fellow local Union. Hreha is married to one of the nurses who went on strike and stayed after the meal to walk the line with his wife.

“The solidarity of NATCA means more than supporting our brothers and sisters within our Union,” explains Tomlin. “It has to extend to the working men and women in the communities we live in.”

Tomlin believes that union members affect all of our lives, every day, whether they are our nurses, our children’s teachers, the food service professionals who work in our grocery stores, or a mechanic who services our vehicle. Standing with them is something that just makes sense.

“If I can’t stand in solidarity with the people in my community, and show their efforts are recognized, with whom can I stand?” he said. “I am so proud of my national union for many reasons, but I’m even more proud of the executive board here at MSP for recognizing the importance of standing in solidarity for something greater than an individual person.”

Tomlin’s strong belief that every working person matters has distinguished him as a strong leader and devoted friend to his NATCA brothers and sisters.

“Sam Tomlin is a hero to the labor movement, and one of the most selfless people I know,” explained Davis. “Sam gave up his day for a fight that was not necessarily his or ‘ours’ as NATCA members, but ours as labor employees. You see, Sam realizes and wholeheartedly believes in the importance of union labor, collective and fair bargaining and, most importantly, doing the right thing for people.”

Davis says he is honored to get to work with such an amazing human being and describes Tomlin as his NATCA hero.

“His set of values, ethics and dedication to not only NATCA but all labor should be recognized,” said Davis. “The example he sets as a union leader is hard to describe. I am proud to call him not only friend, but brother.”

Though the result of the month-long strike did not encompass all that the nurses hoped to accomplish, MSP’s showing of solidarity with another labor organization did make a difference in the lives of the nurses on strike. As a proud NATCA local, they hope that their display of solidarity not only within NATCA, but with all of organized labor, will set an example in the coming year and beyond to always stand up for each other and demand what is right for workers and families.