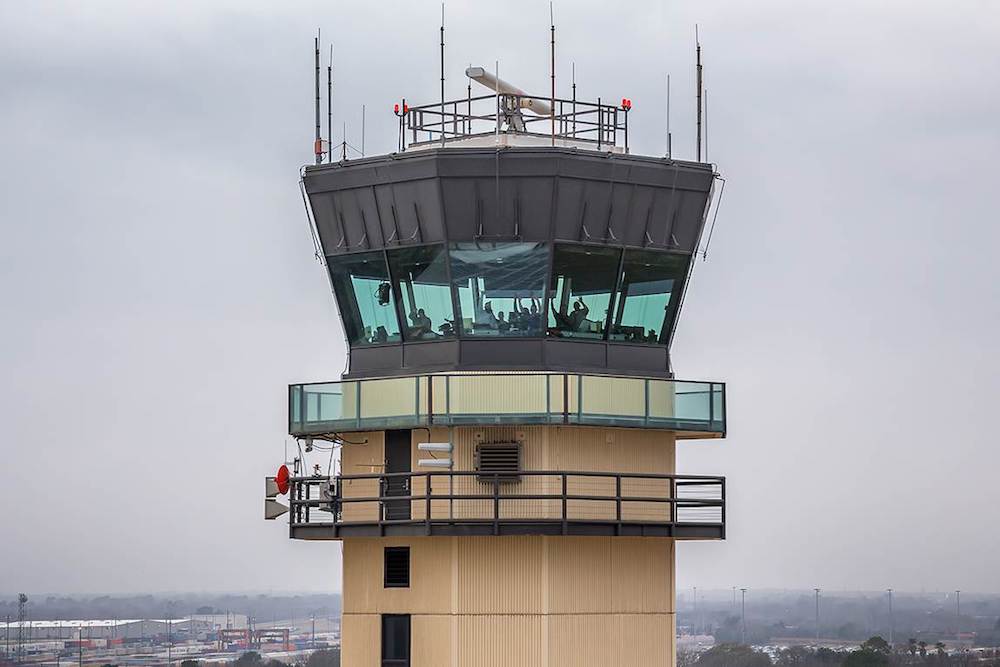 “The outcome of good planning and good communication is flawless execution!”

That was the motto for the Houston facilities working Super Bowl LI traffic last week. By all accounts, the week was an amazing success of providing a safe and efficient operation and another triumph of collaboration between NATCA and the Federal Aviation Administration.

“It cannot be overstated that the successes of this weekend were the result of advance planning,” Southwest Regional Vice President Andrew LeBovidge said. “NATCA members from different facilities pooled their talents as controllers, TMCs (traffic management coordinators) and staff specialists, and engaged to bring their unique operational perspectives to the table to create a vision of how air traffic would run and then turn that plan over to the dedicated professionals who executed the plan perfectly.”

“The plan for Super Bowl LI was executed to perfection in our opinion,” Ooten wrote in an email to Andy Atchley, Deputy Director System Operations for the FAA Central Service Area–South. “The arrival phase of the event was well orchestrated and we did not experience any significant delays throughout the arrival phase. Even more impressive, the departure phase, which typically is the most challenging, was almost routine operation for us at HOU (Houston Hobby) and we incurred only minimal delay on a few flights. The Super Bowl Planning Team, headed by Gerard Quiroz, did an outstanding job and deserve much of the recognition for the success. The front line controllers at the impacted facilities also should be congratulated for the outstanding execution of the procedures implemented for managing the heavy volume of air traffic during this event.

“I’ve seen many Super Bowl plans and other large scale events, and this one stands alone at the top for planning and execution. Great job by all involved and very much appreciated.”

David Murray, the NATCA rep for severe weather for special events at the FAA Command Center (DCC) in Virginia, said cooperation was key.

“Good cooperation and preparation with the affected entities definitely helped this event to go relatively smooth,” he said. “We had been working with ZHU (Houston Center) since March (2016) on getting this event put together and I think that with the extensive preparation that took place, we were able to make this a success.”

NATCA members and their management and tech ops counterparts at several facilities rose to the occasion.

ZHU FacRep Chris Parris said members and FAA employees exhibited a true team effort in every sense of the word over the week surrounding the big game.

“Our Super Bowl committee, which was made up of NATCA members from all of the Houston Area facilities, had been meeting for about a year,” he said, “and had a great plan in place that included special route structures specifically for the Super Bowl, and a slot program that made room for 1,600 additional aircraft for ZHU, I90 and all of the surrounding airports, specifically flying in to attend the many festivities surrounding the Super Bowl.”

ZHU set a new all-time traffic count record for the weekend and, although the facility was asked to move more airplanes than ever before, Parris said, “they did it with ease, with professionalism, and received numerous accolades across the system.” Parris cited an email he received Tuesday morning, Feb. 7 from his acting air traffic manager (ATM), Jeff Stewart:

“Kudos this morning from Industry, NFL, and FAA Senior Leadership to your teams on a job well done. The NFL rep indicated they have received no complaints at all. SWA indicated on the NSR (National Daily System Review) that it all worked very well and they are not expecting any issues today. UAL (United Airlines) said simply, “Thanks to the Houston facilities. Things went very well and all the effort is appreciated. A tip of the hat for a job well done.”

Parris also heard from his center brother to the north – Fort Worth Center FacRep Nick Daniels.

“Congratulations to you and your controllers on a great Super Bowl brother!!” Daniels wrote. “I hope we did you well and did you proud on delivering and taking airplanes.”

On Monday night, Feb. 6, Parris said he sat on his back porch and watched “private jet after private jet turning base into David Wayne Hooks Airport (DWH).” He noted each of the facilities involved as he tracked the aircraft.

“That’s I90 setting them up and DWH putting them on the pavement,” he recalled thinking. “I was quite proud of the work. Where the normal Joe might not even notice, other than the abnormal number of aircraft flying around, I knew. And I knew that each and every aircraft that entered ZHU, I90 and the many surrounding airports received the absolute highest level of service. And I’m quite proud to be a part of what I consider to be the gold standard of ATC.”

HOU along with its neighbor airport, Ellington Field (EFD), received the “lions share” of the Super Bowl airport traffic, said HOU FacRep Ann DeCastro. “We had two runways and four major taxiways closed to accommodate the traffic,” she said. “We also worked it with fewer CPCs, as we lost three bodies just at the end of January.”

“On top of our regular itinerant and scheduled air carriers, Hobby was able to push the traffic out without any kind of break in our normal service of safety, expediency or professionalism,” DeCastro said. “I know this was the result of the collected efforts by our brothers and sisters working at Houston Center and I90 as well as all the other controllers in surrounding areas, and TMCs. Let’s also not forget our PASS (Professional Aviation Safety Specialists) brothers and sisters who kept our equipment running.”

During their heaviest times, all hands were on deck, she added. “All controllers were on OT, and our staff specialist also worked traffic.”

“I also want to echo the sentiments of Andrew and Chris by saying that without the collaborative teamwork of everyone involved in the Super Bowl committee during this past year, I don’t think our operations would have been as seamless and effortless as they were,” DeCastro said.

At I90, FacRep Clay Matheny said the entire Houston air traffic team pulled off a remarkable feat for an “unbelievable Super Bowl game.”

“The game will go down as one of the greatest Super Bowl games ever (won by the New England Patriots over the Atlanta Falcons, 34-28, in overtime), and our Houston air traffic team will be the example of how to efficiently and safely run air traffic for such an important American event,” he said.

“I’m extremely proud of not only Houston TRACON’s employees, but also every facility in the Houston area,” Matheny added. “During those five days we did not field complaints from other facilities and we did not complain to them. We simply did our job, and we excelled. Everyone came together, knew the plan, and executed the plan. Everyone was working long hours during those five days. Whether it was holdover or a six-day week, they got it done. We increased our staffing level at I90 roughly 50 percent most days. We were prepared for whatever the big game threw at us.”

Management and NATCA came together to make sure all employees were taken care of during the five-day stretch. “We bought breakfast, coffee, lunch, and snacks for anyone working during Super Bowl weekend,” Matheny said. “We truly are one team.”

“I’d like to say thank you to all those that helped plan this event,” Matheny concluded. “All facilities came together and came up with a plan to safely and efficiently get all pilots and passengers through the Houston airspace. At I90 we created new procedures and even a new position. That position turned out to be one of the best ideas the team had. They named the position ‘football’ and the position helped feed the satellites so as not to inundate the satellites with heavy traffic into Sugar Land (SGR), West Houston (IWS), Houston Executive (TME), EFD, and many more satellite airports.

“The Houston Super Bowl committee did an amazing job planning for this event and deserve all the credit in the world.”

The story from the Command Center echoed the sentiments of local Houston facilities: the level of collaboration involved in the preparation for the event resulted in a well-orchestrated execution of the plan. In fact, says DCC FacRep Tony Smith, the facility gets involved with Super Bowl planning with the local facilities a year in advance. Planning has already commenced for the 2018 Super Bowl in Minneapolis. “NATCA is involved in every step of the way,” he said.

DCC Manager Tony Tisdall and Smith agreed that the local facilities, stakeholders, security organizations, and the Command Center collaborated on how best to manage potential issues related to the significant increase in traffic. The DCC team designed routes to provide an organized structure to the traffic flow into the Houston area. It was especially important, they said, that dedicated routes were available for the mass exodus that occurs at these events post-game and the following day. The arrival flow, conversely, is spread out over several days.

As of Sunday morning, Feb. 5, the arrival count into the Houston area topped 1,600, according to Murray.

“We had an extensive arrival route structure to help this volume flow smoothly into the I90 airports,” he said. “The departure volume then kicked up by the end of the game on Sunday night and ran through most of the day on Monday. The Command Center made the departure routes available for ZHU to monitor through TSD (traffic situation display) reroute monitor to help create an efficient traffic flow out of I90 and ZHU.”

SGR and Conroe-North Houston Regional Airport (CXO) were two key reliever airports. They experienced an increase in volume but delays were minimal. “The completion rate is impressive,” Smith said. “That simply means that people were able to get where they wanted to be.”

Additionally, Smith said, the Command Center had two severe weather specialists working the midnight shift at the height of the activity over the weekend. That is noteworthy, he added, because the severe weather unit normally does not work mids.

LeBovidge said the success of the weekend’s work was done against a backdrop of dwindling staffing, which presented challenges for all facilities.

“It truly was a remarkable accomplishment by the controllers across the Houston area and those in neighboring facilities who provided support without questioning,” he said.