NATCA this week salutes the great work of its Region X members who have been, in the words of Samantha Giberson, “working like crazy in the 11th hour” to complete certification of the new Boeing 737 MAX aircraft.

“We’ve been feeling overwhelmed and exhausted in the BASOO (Boeing Aviation Safety Oversight Office), but we are pulling together to get through,” said Giberson, the Foreign Validation Specialist in the BASOO. “What an awesome team to be part of!” The BASOO is located in the FAA Regional Office in Renton, Wash., and is staffed by NATCA’s Region X Aircraft Certification bargaining unit employees. NATCA engineer Curt Howe noted every 737 is born in Renton.

On Feb. 11, Boeing took one of its 737 MAX test frames for a nine-hour endurance test over 37 waypoints. For eight of those hours, the pilots “wrote” a 619-mile long, 172-mile high “MAX” over the states of Washington and Montana with its tracked flight path. The flight covered 3,439 miles.

“Boeing worked with many stakeholders including our most admirable air traffic control sisters and brothers at Boeing Field, Seattle ATCT, Seattle TRACON, and Seattle Center,” Howe said. “I thought it was a good snapshot of what NATCA members do every day to keep the NAS alive. Or else how could they write in the sky with all the traffic around them?”

Writes Flightradar24 in a story about the MAX: “The 737 MAX N8704Q has been busy over the past month with flight tests. In mid-January, the airplane visited Yakutsk, Russia, for cold-weather testing. When the MAX began its first test flight in Yakutsk, the temperature at the airport was -37℃. Ten days later the airplane flew to Darwin, Australia, where the temperature was +32℃.

“All of these flights are part of the new aircraft’s certification process, which also includes tests on the ground, like the wet runway water spray test Boeing conducted with 737 MAX N8702L. Southwest will be one of the first airlines to take delivery of the 737 MAX in the middle of 2017.” 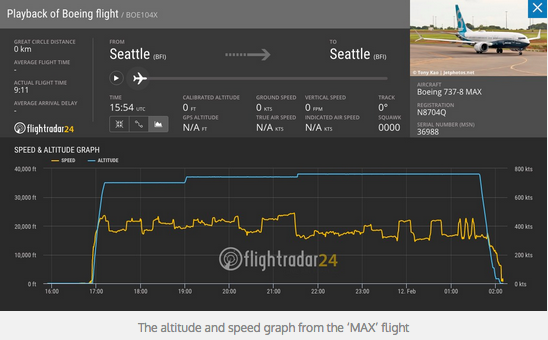