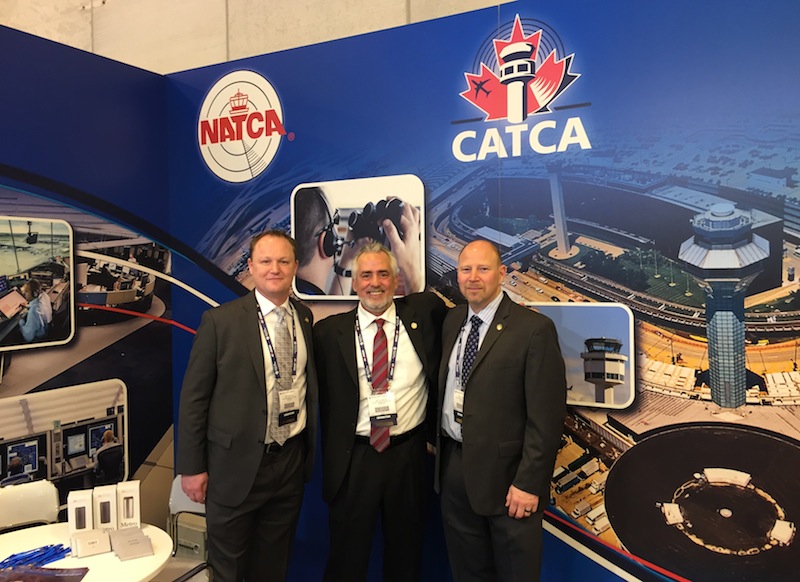 On March 7, the first day of the Fifth Annual World ATM Congress in Madrid, Spain, NATCA’s Director of Safety and Technology Jim Ullmann and NATCA Program Management Organization (PMO) Rep Jeff Woods took the stage to discuss collaboration, a cornerstone of success in the aviation community. Both shared their unique technical perspectives on how the United States has built better, more robust systems through collaboration.

“We may come at it from different angles but we all want to do the same things,” Woods said. “Those angles help us put out the best product we possibly can.”

Ullmann pointed out that in the not so distant past, air traffic controllers, engineers, and other stakeholders had little to zero say in technology development for the operating environment. For example, En Route Automation Modernization (ERAM) was to be implemented in 20 facilities across the United States. The project was set to be complete in 2009, but when the deadline hit, no facilities were ERAM functional.

“Our leadership determined we wanted to become problem-solvers and be part of the solution,” Ullmann explained. “The agency came to us in 2009 and asked us to get involved in ERAM implementation, but before NATCA agreed, there were several factors to consider. There was concern the entire program could fail, and there was a chance if it did, some may blame the Union even though we had yet to be involved.”

Upon agreement that NATCA would become involved, he said that the message from leadership was simple: “don’t fail.” That was the beginning of true collaboration between NATCA and the FAA.

Woods said a structured partnership is the key to success. There will always be competing visions of what we are trying to accomplish, he said, but you can set realistic expectations from all sides: controller, engineer, and air navigation service provider (ANSP). He said that the other piece is when to bring someone onto a project. The earlier NATCA is involved, the better. It reduces overall cost, helps deliver on deadlines, and improves both efficiency and compatibility of new equipment with existing conditions in the working environment.

“The relationships are crucial to this whole process,” Woods sad. “You’re both trying to do the same thing.”

Ullmann stated the importance of having a voice at the table no matter the project. ERAM requirements had already been set in stone by the time NATCA came on board. Thus, it ended up taking years to address those early issues. After NATCA was brought on board, Washington Center became the 20th and final facility to move to ERAM full-time in 2015.

“It was a huge success story for us and the FAA,” said Ullmann. “You can’t underestimate the importance of including your workforce – the front-line controllers talking to airplanes every day. If you don’t have that buy-in, it won’t work.”

Woods explained that you also need communication between parties. It helps everyone involved reach a common understanding. That way, all parties know what each is trying to accomplish and more expectations can be met.

“Once you do that, you will see success,” Woods said. “Like how we took everything we learned with ERAM and applied it to Data Communications (Data Comm).”

Ullmann and Woods said that NATCA was involved in Data Comm from the beginning.

Woods said collaboration is hard, but is the right thing to do.

“We all have different viewpoints, different entities with a stake in the game,” he said. “How do we accommodate everyone? We find common goals.”

Establishing common goals is crucial to understanding what everyone is trying to work towards, Woods and Ullmann said. For example, the NextGen Advisory Committee (NAC), which is composed of industry stakeholders, airports, and the FAA, wants to take on restructuring New York airspace.

“Where do you start?” asked Woods. “That’s our next big collaboration test because everybody wants a piece of this project. It will be hard but its what we do. We will keep working at collaboration.”

Ullmann added that an important component of collaborating is building relationships in order to establish trust. He also emphasized that collaboration cannot just be within the ANSP.

“You have to build relationships not just within the FAA, but outside of the ANSP,” Ullmann said. “It’s about communication with industry, partners, and the ANSP. It’s a difficult way to do business. It’s easy to lose trust but it is the way we must work.”

He went on to say that you have to be able to talk to your counterpart and understand their pressures and their additional unique interests because often, you have the same goal: you just approach that goal from different points of view.