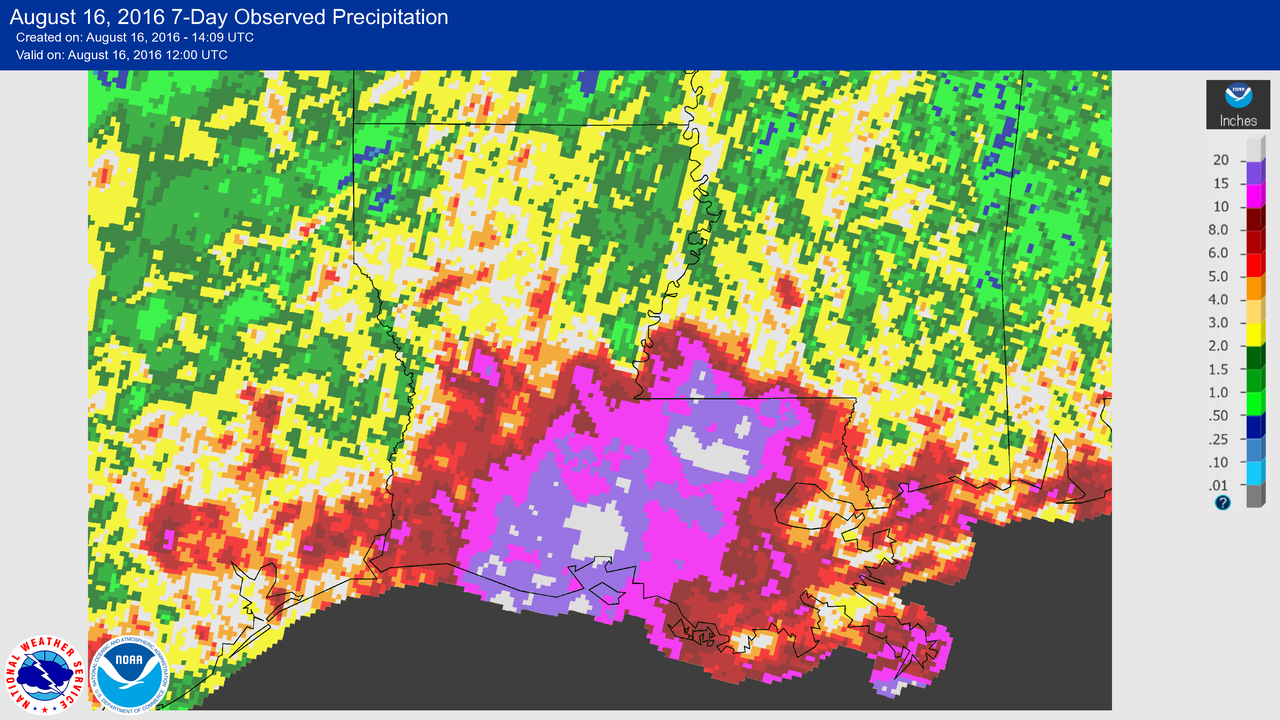 On the first day of heavy rain, Aug. 11, 2016, Baton Rouge (BTR) member Mat Lehnert thought nothing of it. “Nobody considered it a big deal,” he said. But by Friday, Aug. 12, the rain was falling at rates of two-to-three inches per hour and everyone began to grow more anxious.

“We were like, ‘hold on, this isn’t right,” Lehnert recalled thinking.

It wasn’t until late that evening and early into Saturday morning, Aug. 13, that what meteorologists called a “mesoscale convective system around a weak area of low pressure” finally moved off its stationary location. But by then, The Washington Post later noted, the storm dumped three times as much rain on Louisiana as Hurricane Katrina in 2005 – the equivalent of 7.1 trillion gallons of water or enough to fill Lake Pontchartrain about four times.

That’s when the situation turned from bad to catastrophically worse. A flash flood emergency was declared on Aug. 13 as rivers and tributaries carrying the swollen water flows could not contain the overflow. Baton Rouge found itself right in the middle of it, with areas to the east and south of downtown hardest hit.

To the north of town, where BTR is located, NATCA members began a week-long stretch of air traffic control operations that nearly doubled their normal weekly volume.

In honor of their efforts, the Baton Rouge local was presented with The Beacon of NATCA award on March 21 at Communicating For Safety. The new award is given to a facility that rises above and handles an emergency or disaster situation with grace. No amount of planning, training or preparation can prevent a disaster event. But when it occurs, whether it is natural or man-made, NATCA members answer the call. Aviation safety professionals are among the first to take direct action in response to a disaster, working with first-responders. They attend to the immediate danger and implement longer-term strategies to mitigate damage.

The Beacon of NATCA award was created to recognize those facilities that go above and beyond to perform the essential and difficult task of disaster response. The recipients of this award are the epitome of grace under pressure, offering exceptional ATC services. The individuals in these facilities show incredible perseverance and inspire us. They are the beacon that guides us home and the heroes that rise above the chaos to keep the National Airspace System running as safely and efficiently as possible.

From Aug. 5-12, BTR members handled 1,564 operations. But from Aug. 13-19, that number jumped to 2,775. Military operations accounted for 780 of those operations at the height of the rescue and relief missions in the area. A normal week of military ops might reach between 50-100, said BTR member Imran Rehman.

Lehnert said communication was strong with all aircraft and among each other in the facility, which he credited to the preparation that Katrina had afforded the facility a decade earlier.

What also made the operation go smoothly with all of the increased helicopter traffic were two key things:

“We chopped up the airspace,” said Lehnert who on Feb. 15 took over as BTR FacRep. “One person worked everything as usual. Another worked helo ops out of the hospitals and affected areas. We set up that one extra position and it worked well.”

Of the five controllers at BTR who worked both Katrina and the 2016 flood events, two of them have since retired, Lehnert said. “It was better and smoother this time, than during Katrina,” he said. In 2005 Lehnert himself was stationed in New Orleans in the Navy and experienced Katrina up close and personal. This time, he said, “it was no different in terms of what I was seeing. Water was just everywhere.”

Rehman recalls working helicopters into the football stadium at Louisiana State University (LSU), which was set up as a triage area. Waters were still rising even as the event concluded its first full week.

Rehman had to wade through chest-high water on Saturday morning, Aug. 13 to leave his flooded apartment complex. He was in swim trunks with a backpack carrying several possessions. He ended up having to hitch a ride to the facility with a car that was carrying several people to a shelter near the airport. He got to BTR at around noon and worked his normal shift with a skeleton crew.

Because of the flooding at his apartment, he stayed that night with Lehnert and his wife, fellow BTR member Chrissy Lehnert. It was a full house: The couple also took in a second member, his pregnant wife, and baby daughter.

“At one point, there were nine adults, four kids, and five dogs at our house,” Mat Lehnert said.

A majority of BTR members live on the east side of Baton Rouge, but most thankfully escaped major damage to homes and property. Unfortunately, one member lost their home and two others lost vehicles. A third member, Jordan Haldeman, whose home sat in a low-lying area of his neighborhood in Zachary, La., a few miles north of BTR, suffered significant flood damage but NATCA members came to his aid quickly.

Haldeman was in Oklahoma City for RTF training during the flooding. His pregnant wife stayed in the home but she soon had help once the flood waters came to the house. Six members in all came to help and spent the better part of several days tearing out drywall and insulation. Just six months later, the family has a rebuilt home and a new baby boy.

“There were efforts by everybody that went unrecognized,” Lehnert said. “Some offered to work OT. Some offered food and supplies. Some let other people stay with them who needed a place to stay. It seemed like second nature at that point. Nobody was shying away from what was happening. Everyone stood up and asked, ‘how can I help?’”

After the event, the facility received a thank you letter from T.J. Pena, Commander of the U.S. Coast Guard Air Station New Orleans. 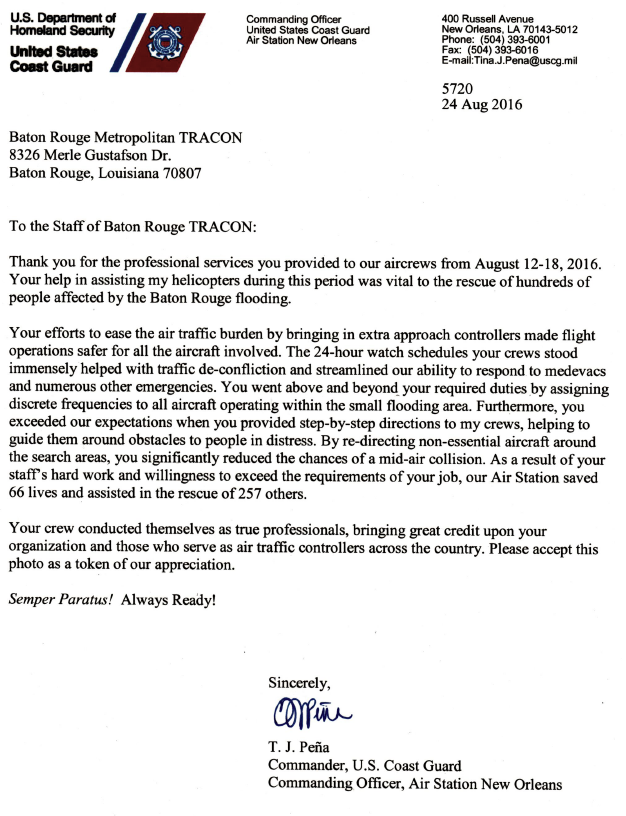 Rehman accepted the Beacon of NATCA award on BTR’s behalf at Communicating For Safety and shared his thoughts on the event:

I woke up that Saturday in August to a single thought in my head: “Great … my A/C stopped working again.

Little did I know the situation was much worse. I made my way to work, the only home I had left. A place filled with people that I am proud to call my brothers and sisters. My family.

There is an old French proverb that says, “it is the fate of glass to break.” During that week, Baton Rouge was made of anything but.

On behalf of my brothers and sisters at Baton Rouge, I would like to sincerely thank all of the first responders, Coast Guard units, and everyone else who helped with the rescue effort.

And finally, thank you to NATCA for supporting and recognizing the hard work and sacrifices my facility made. Thank you.