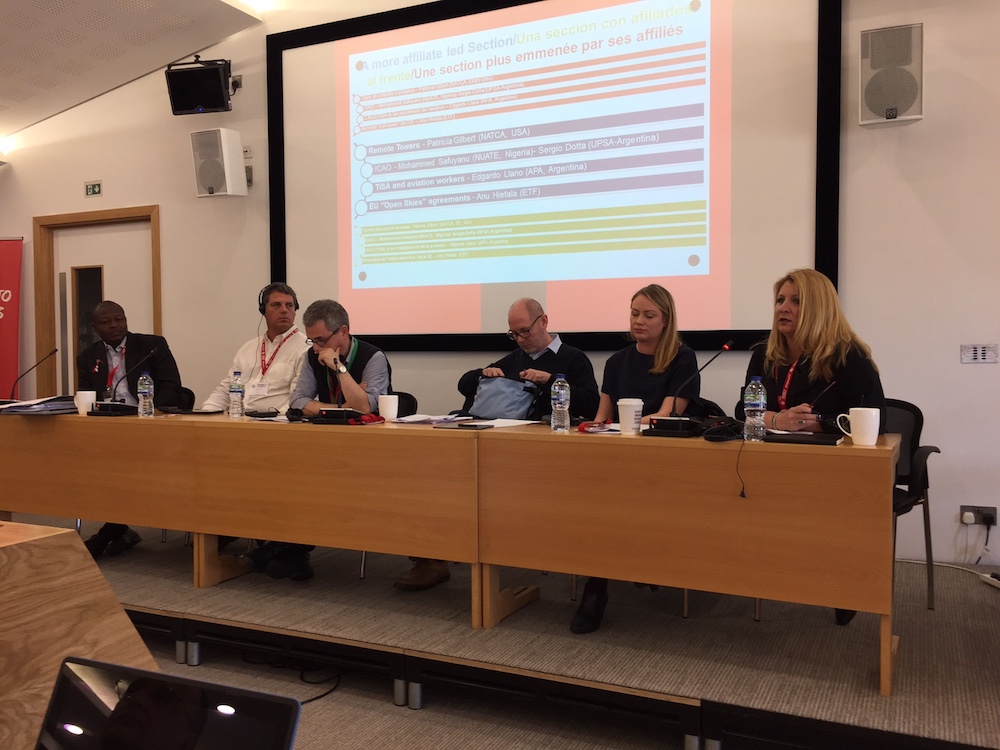 NATCA Executive Vice President Trish Gilbert is the Vice Chair of the International Transport Workers’ Federation (ITF) Air Traffic Services Committee. Gilbert spoke at the ITF Civil Aviation “Pathway to Congress” conference held in London from March 9-10, in preparation for the next ITF Congress. (The most recent was held in 2014 in Sofia, Bulgaria.)

During the conference, Gilbert spoke on a Remote Tower panel. In his opening remarks for the panel, ITF Civil Aviation Secretary Gabriel Mocho Rodriguez said that globally we cannot let industry steamroll the work force with new technology.

Gilbert explained to delegates in attendance that air traffic control (ATC) is a service provided by air traffic controllers who direct and separate aircraft on the ground and through controlled airspace while also providing advisory services to aircraft in non-controlled airspace. The primary purpose of ATC worldwide is to prevent collisions and provide the safe, orderly and expeditious flow of air traffic. In some countries, ATC plays a security or defense role and in some cases is operated by the military.

Now with super-fast fiber networks, high definition cameras and remote sensing technology the concept, testing and deployment of remote tower services — also referred to as digital towers, virtual towers, remotely operated towers, remote air traffic services (ATS) — is advancing rapidly. The technology consists of cameras that transmit images and data to a separate control room/center that could be miles from the airport. There, the view of the airport is stitched together to create a live 360-degree image that can be augmented with other operational data like radar labels on individual aircraft and automatic detection/display of movements in the air and on the ground. A pan-tilt-zoom camera can be added, giving the air traffic controller a detailed view on a separate monitor, and advanced thermal infrared camera technology can enhance the view of the airfield during inclement weather conditions, low-visibility and at night.

In addition to speaking on the panel, Gilbert submitted a report to ITF, giving a global overview of remote tower air traffic services.

Gilbert explained that there are both social and air safety issues that NATCA is concerned about when it comes to remote tower technology. She explained that NATCA’s approach includes talking to manufacturers to better understand the technology, and working with them from the ground up to ensure it works in the operating environment.

Gilbert said that NATCA has explored some of the positive aspects of the technology. As it improves, they believe it can benefit air navigation systems, but could reduce safety in a for-profit model.

She explained that while there is not a lot of opposition to the technology itself, some are concerned that manufacturers would be driven by financial gain rather than maintaining or enhancing safety.

Gilbert continued, saying that at low-activity airports, this technology could make sense. She explained that in the U.S. we already have dozens of airports that run 75,000-to-125,000 operations a year without any air traffic control services at all. Remote tower technology is being discussed aggressively where a controller could work one airfield, take a break, come back, and then work a separate airfield. However, she cited that no human factors studies show the level of multi-tasking required or explain the skill set needed of the air traffic controller working in a new remote tower environment that mandates they work simultaneous airports in one setting.

She also said that we all need to continue to move forward on regulation of the technology and engagement with manufacturers and ANSPs to ensure the operating environment remains safe.

“There are many pieces of technology that are changing our world, this is no different,” Gilbert said. “We have to figure out how to integrate the technology safely.”

Remote towers are becoming a popular topic of discussion and there is clearly a push by some ANSP’s to implement them. NATCA President Paul Rinaldi echoed Gilbert’s remarks at the World ATM Congress in Madrid, held the same week.

There, he explained that he sees potential in the technology to keep the skies safer, but it can’t be approached from a profit-driven focus. He explained that we can’t fight new technology, but we can work to make sure it enhances the system, makes it more efficient, and makes it safer. Both Gilbert and Rinaldi believe we must embrace it, own it, and work to make sure it is the best it can be.