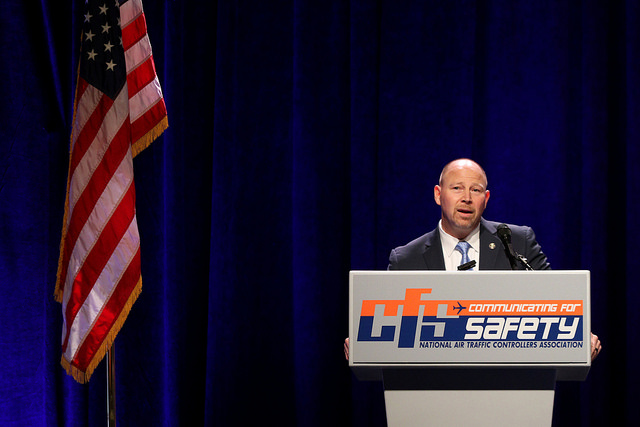 As attendees of Communicating For Safety 2017 (CFS) came together in Las Vegas, NATCA President Paul Rinaldi took the stage for the eighth time. Every year, Rinaldi, Executive Vice President Trish Gilbert, and NATCA Safety Committee Chair Steve Hansen craft a welcome message to the membership, featured in the Daily Dispatch. This year, the trio thanked everyone for their commitment to dialogue, continuous improvement in aviation safety, and their commitment to collaboration.

With nearly 1,500 attendees for the past two years, CFS has become an essential opportunity for members of the aviation community — including industry stakeholders, pilots, Federal Aviation Administration (FAA) leadership, and of course, air traffic controllers and aviation safety professionals — to come together and discuss the most relevant topics in aviation safety. Often leading to productive relationships that help everyone improve the National Airspace System (NAS) for the better.

In their welcome message, they highlighted that it is essential for air traffic controllers and aviation safety professionals to continue to run the safest, most efficient system in the world by focusing on the operations, addressing challenges, confusion, and complacency by collaborating.

During his keynote, Rinaldi explained that aviation safety is the “cornerstone of our existence.” He explained that everyone should be proud of the robust safety culture that has been fostered throughout the NAS, but cautioned that we must never take it for granted.

He said complacency is dangerous and is unacceptable in the face of growing capacity and demand and that the status quo does not provide adequate, reliable funding for the NAS.

In order to be successful in an ever-changing world with new technologies and users, like space-based Automatic Dependent Surveillance-Broadcast (ADS-B), commercial space travel, and Unmanned Aircraft Systems (UAS), we must have the funding in order to keep up with today’s traffic, let alone the future traffic growth.

He reminded attendees that the NAS is an economic engine that keeps our country running. Aviation contributes approximately five percent of the GDP and 11 million jobs. NATCA members are essential to keeping the country running, yet we continue to see attacks on federal workers. Rinaldi encouraged attendees to continue to focus on running the safest, most efficient, most complex aviation system in the world.

Rinaldi closed by quoting William Shakespeare, “Be not afraid of greatness,” explaining that the NAS is great by nature but that we must strive every day to prove that greatness through our safety record. 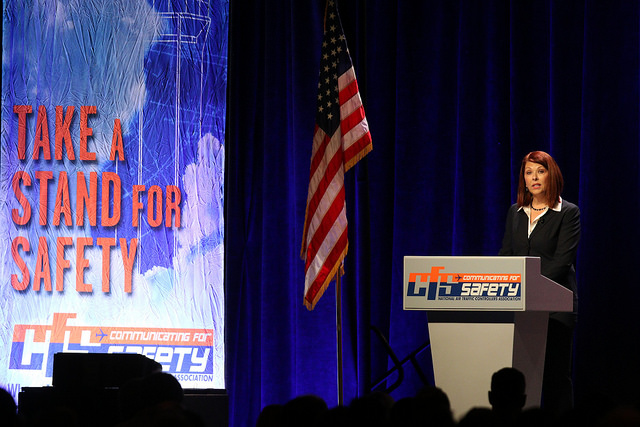 Teri Bristol, Chief Operating Officer (COO) of the FAA Air Traffic Organization (ATO) took the stage after Rinaldi, introducing the  collaboration panel with remarks on the progress that has been made by the FAA and NATCA.

She echoed Rinaldi’s comments and commended the safety focus of FAA employees, crediting collaboration with moving the safety mission forward.

“Every person here shares a common interest: improving the safety and efficiency of the National Airspace System,” she said. “While much will be debated in the coming days about the ATO’s structure, what we do know is that we are the best when it comes to providing exceptionally safe air traffic services. So let’s stay focused on our critical safety mission.”

She explained that whether it’s the effects of weather, human factors, environmental issues, or new technologies and modernization efforts, that we as a community share a common interest in safety and efficiency.

“It’s critical that we collaborate on these issues,” Bristol said. “Collaboration at the FAA has matured and grown in the last several years and I’m honored to be a part of that.”

Bristol noted significant progress in many NextGen programs due to collaboration. She singled out the Data Comm program for special mention. Since implementation in 2015, she said, “together we have produced astounding results.” Bristol said Data Comm is deployed at 59 airports, 29 months ahead of schedule with an additional seven airports awaiting deployment.

Bristol closed her remarks with a call to action, imploring CFS attendees to continue their discussions around all aspects of weather and bring that back to their facilities.

“Three critical areas that I would ask you to focus on are the issuance of depicted weather, soliciting PIREPS (pilot reports), and disseminating PIREPS,” she said. “We have people walking this earth today because of your attention to detail. That’s something we should all be proud of. Your actions truly do make a difference, so thank you for all you do.”

Collaboration is not simply a memorandum of understanding, both Rinaldi and Bristol agreed. It is a practice that has been fostered by NATCA and the FAA for the last five years, now codified in the new collective bargaining agreement, the Slate Book.

“Most of the changes you will see in the contract really reflect just a change of acknowledging the way we have been working for quite some time,” Bristol said when the contract was signed.

Last October, at a banquet honoring Rinaldi with the Air Traffic Control Association’s Glen A. Gilbert Award, Bristol praised the important role that Rinaldi and NATCA have played in building and growing the success of what she called, “a culture of collaboration.”