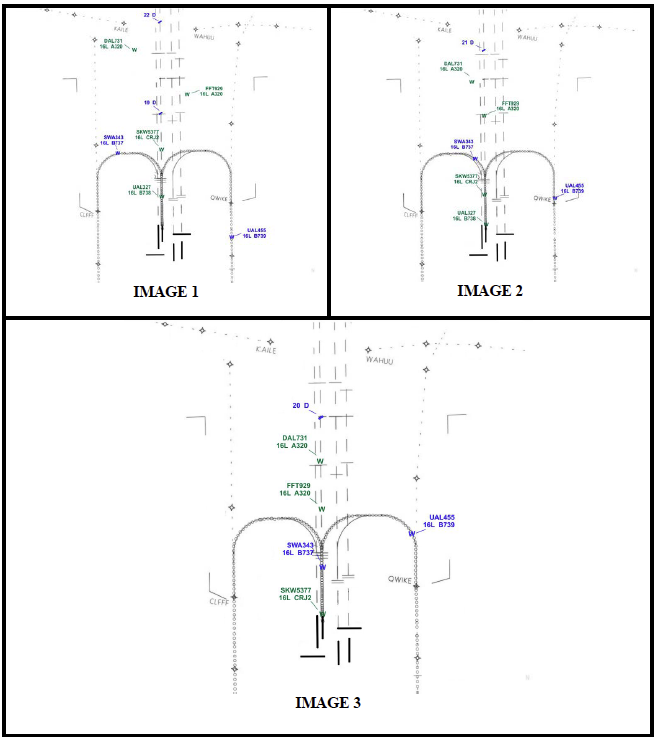 The Converging Runway Display Aid (CRDA) was originally developed in 1994 for sequencing arriving aircraft to converging dependent runways. It is still in use at several large terminal airports where it is a sequencing tool used to stagger arrivals to avoid simultaneous converging runway operations in the airport environment.

“The primary purpose of CRDA was, just like the name, to show when two runways converge,” said Garcia. “There is a single point in space where they come together. The design of the software is such that the controller needs a reference to that particular point so that aircraft coming in to the adjacent runway would display a fake target on the other runway, so any aircraft coming in on the adjacent runway could minimize separation.”

Previously, that converging point was always based on a linear trajectory until a controller at Denver Tower, Monica Feder, asked if they could use CRDA for Required Navigation Performance-Authorization Required (RNP-AR) approaches, or, in layman’s terms, a curved approach. CRDA technology had not been developed or designed to do anything but strictly linear approaches but Garcia and the OSF team were excited by the challenge.

The CRDA application by NATCA OSF for RNP-AR was designed using existing functionality available in Standard Terminal Automation Replacement System (STARS) software. Over two months, the Denver OSF worked with D01 leadership to fine-tune the presentation of the ghost target.

Initially, the use of CRDA was limited to a workgroup composed of front line managers, traffic management coordinators, and air traffic controllers, known as the D01 Final Radar Working Group. They spent approximately 2 months testing and evaluating the tool to ensure it produced two desired results:

“As OSF employees, we provide customized software so the facility is able to fine tune or display certain things in the data block that they would like to see,” Garcia said. “Once the operational software is delivered, we consider site specific data for the operations and deliver accordingly.”

On this project, Denver OSF had to go through multiple iterations to figure out how to project a linear ghost target on a curved approach aircraft. They had to essentially trick the system into thinking the ghost target was flying to the runway when the aircraft was actually turning on to the approach.

“We played around with the technology and tested it,” Garcia said. “We essentially emulated a curve using multiple points in space that allows the ghost target to be presented to a linear point based on the curved approach of a real aircraft.”

It took about four months before they came up with a product they could deliver to the facility. Once they did that, it was a huge improvement in the way controllers handled arrivals using the RNP-ARs.

When the D01 Final Radar Working Group decided both desired results were met by CRDA, they supported the use of CRDA by the controller workforce. They determined both the requirements for training, and the keyboard entries for the macro used to turn CRDA on and off for specific runways.

“There was a lot of interest initially for the simple fact that it gives controllers the opportunity to clear arrivals for those RNP-AR approaches,” Garcia said. “There are two ways an aircraft can fly into these runways. Once they’re on a down wind, some aircraft are equipped to fly a tight approach. Banking about 25-degrees at about 210 knots. Those type of aircraft are always allowed to fly the approach but if they’re behind an aircraft incapable or unequipped for that approach, controllers have to pull it out of the sequence to fly around or through a conventional type of route. The change allows them to bring the aircraft in a little bit tighter to base on final.”

Now, Denver conducts between 1,400 and 1,700 RNP-AR approaches per month. Since the inception of the program in 2013, there have been approximately 40,000 approaches flown. Denver uses Established on RNP (EoR) to its widely spaced runways. The EoR concept is predicated on the aircraft path-keeping characteristics of RNP technology. It considers an aircraft established on an RNP approach procedure while on downwind to an airport prior to turning inbound and aligning its path with an extended runway centerline for landing. In Denver, EoR operations result in shorter downwind legs and optimized profile descents, thus increasing operational efficiency.

Instead, CRDA helps identify RNP-AR opportunities by providing a visual reference on the extended runway centerline. This visual reference is referred to as a ‘ghost target’. The ghost target is composed of a virgule depicting the target location, a read-out of the ground speed of the parent aircraft, and the aircraft’s RECAT weight classification. The aircraft’s call sign is provided if the controller clicks on the ghost target. In practice, if the ghost target is in a good location in reference to straight-in arrivals, the controller will issue the RNP-AR approach clearance. If it is not in a good location, the controller will instruct the pilot to expect a different approach.

Training on the new technology consisted of a 30-minute briefing that showed the application, explained its use, and provided the associated keyboard entries to turn it on and off. Controllers were instructed that CRDA was not a separation tool. Instead, it was only an advisory tool to assist with sequencing.

The controllers were encouraged to be conservative in its use, and try it out during non-busy times. They were instructed that the use of the tool was optional. As new controllers enter the D01 workforce, they receive classroom and on-the-job training on CRDA.

“OSF’s are Jack’s of all trades,” explained Garcia. “In the past, the majority of OSFs were all 2152s with air traffic control backgrounds. In the last 10 years, we have started incorporating technical expertise and engineers, becoming a full service type of group where we can address both software and hardware issues.”

Garcia describes OSF teams as the first line of defense for all terminal facilities across the country that can address operation questions and concerns related to data blocks, radar issues, and communications issues.

“They call us first,” Garcia said. “We can then determine if we can assist them or if not, identify exactly what type of specialists to bring onto the team.”

The safety benefits of what the OSF team did with CRDA at the facility are profound. Controllers are able to identify a visual reference so separation standards can be met for aircraft on final.

“One of the biggest issues we addressed was the facility wanting us to come up with a safety risk management system to implement the ‘new’ technology,” Garcia explained. “They understood what we did to be something completely different than the CRDA they knew, but we didn’t change anything. We just thought outside the box and used existing capabilities that were already under the Safety Risk Management Decision Board.”

Garcia explained that the technology has been around for 25 years and OSF was just able to use it in a different way. The ramifications are vast in regards to the customer. It has become a great training tool for air traffic controllers and training continues to be developed in Denver using the new design.

“We can show controllers where opportunities to create spacing and sequencing are based on different airport designs now,” Garcia said.

Garcia notes the truly collaborative environment that enabled everyone to come together as the key to the project’s success. Currently, Denver is running ghosts on multiple runways and has the capability of doing three ghosts simultaneously.

The technology has already improved how controllers run airplanes in and out of Denver. So much so that Houston, Orlando, San Antonio, Austin, Portland, and Seattle have all looked at the design and want to use some of its capabilities.

“We’ve been working with those facilities’ OSFs to implement CRDA on those sites,” said Garcia. “It’s in its infancy because of the changes we made but the biggest hurdle is that the technology required for the capability of what we did here in Denver will not reach the majority of facilities for another year.”