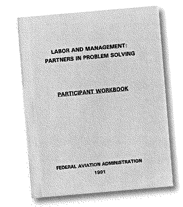 With backing from then FAA Administrator T. Allan McArtor, the introduction of a training course titled “Labor and Management: Partners in Problem Solving” in March 1988 helped begin to change adversarial attitudes. The curriculum was designed to jointly teach facility managers and Union representatives about their rights and responsibilities as well as techniques in communicating and resolving differences.

The 3-day class had controllers and managers switch roles to better understand problems and perspectives from the other side. Controllers learned what it was like to defend policies they did not personally support, while managers found reasons to file grievances. Approximately 1,000 managers and facility reps attended the course throughout the spring and summer of 1988.

The one-time sessions paved the way for a more formal, ongoing program that began at New York Center. Like many of his fellow controllers, local FacRep Michael McNally worried about a PATCO II and fully embraced this “Age of Collaboration.”

“I didn’t want to be involved in a union if it was going to be radical,” McNally said of his mindset at the time.

McNally, who served as NATCA’s third president, from 1997-2000, saw the need to encourage more harmonious relationships and approached the facility’s deputy manager, Jim Buckles. Together, they developed a collaborative, committee-oriented program they called Success Through Partnership (STP).

The program faced an uphill battle, with resistance from both sides.

“Managers hated it,” McNally recalled. “To them, it was a raid on their authority. They thought it was going downhill. Letting the monkeys run the zoo.”

Initially, Union members believed the program diluted their power as a labor organization. But, over time, saw the benefits to abandoning an adversarial policy became apparent.

The program eventually caught the attention of high-ranking managers at FAA headquarters. The experiment migrated to New York TRACON and by November 1991 had evolved into Quality Through Partnership (QTP), which McNally directed as the Union’s national QTP coordinator. Under the program, groups of managers and Union members had to agree on issues before they could be implemented. It was intended as a collaborative labor-management relationship that created “an environment where employees are empowered to participate in decisions that affect their work lives.” Decisions were binding and neither side could appeal to the Federal Labor Relations Authority.

The agency created a training video to introduce QTP and contributed substantial money for sessions at all of its facilities. Acceptance came slowly and for some, who were uncomfortable with this “new” way of thinking, not at all.

Many members of NATCA fully embraced looking at collaboration differently. Carol Branaman, who served in leadership roles with PATCO and was elected NATCA’s Northwest Mountain Regional Vice President in 2000, explained that the program opened doors for the Union.

“Everyone maligns QTP, but it was a huge leap for the FAA,” she said. “In many ways, it gave the Union tremendous influence that it never had before. It was the first time they acknowledged the Union had a role in everything that affected the facility.”

Barry Krasner, NATCA’s second president, serving from 1991-1997, noted that the law allows both sides to engage in protracted disputes over grievances that can take years to resolve. He said that QTP provided a way to settle them faster.

Bill Murphy, Kansas City Center, who succeeded McNally as QTP coordinator in 1994, said it came down to common sense.

“If you beat up someone, what are you going to get back?” Murphy posed. “You’ll get beat up.”

Aided by follow-up training sessions, labor relations in the FAA gradually improved. But in 1996, QTP was among nine Agency programs totaling $29 million that were cut by the Republican-controlled Congress as part of its “Contract with America” to balance the budget.

“QTP was not a failure. It left its mark,” said Howie Barte, a founding NATCA organizer who continues to believe in collaboration. “Where it was successful, it’s still successful. Where it wasn’t successful, it never had a chance.”

Despite QTP being cut, some parties continued to carry out the program in practice at facilities as one of the early battle cries for collaboration between NATCA and the FAA. Barte was right, it had left its mark.

Beth Thomas, NATCA 1988 contract team member and Southern Region QTP coordinator, was encouraged by QTPs potential. She became an air traffic manager at Tamiami for 2 years, an experience that reminded her people — not programs — cultivate successful relationships. She then moved on to Air Traffic Evaluations and transferred again to the FAA Command Center in December 2001. While she acknowledged that, “People don’t want to give up their territory,” she was a steadfast supporter of the collaborative mentality throughout her career.

After embracing QTP during his presidency, Bell continued to support collaboration. He transferred to the Command Center as a Training Specialist in October 1998 where he encouraged everyone to think outside the box and see labor-management relations in a new light.

McNally’s union perspective was founded on a desire to work cooperatively with management. From his time organizing STP with a receptive manager to becoming NATCA’s National QTP representative, McNally’s vision of collaboration continued during his term as EVP from 1994-1997.

He encouraged the expansion of a budding roster of NATCA liaisons and technical representatives, which boosted controller influence in FAA projects while saving the Agency time and money. He was then elected NATCA president in 1997, shortly after NATCA won the right to legally bargain over pay. The union was also finishing a massive project to restructure facility and pay classifications at the time. Hoping to negotiate a compensation package that fairly represented the controller workloads, McNally understood the need for cooperation more than ever. His successful talks with FAA Administrator Jane Garvey, who served from 1997-2002, further solidified the labor-management partnership in a contract that rewarded controllers with substantially larger paychecks.

The benefits of working collaboratively were seen then and continue to be embraced by NATCA leadership today. NATCA President Paul Rinaldi, Executive Vice President Trish Gilbert, and NATCA Safety Chairman Steve Hansen all touted the strong collaborative relationship NATCA has with the FAA this year at Communicating For Safety. Teri Bristol, Chief Operating Officer (COO) of the FAA Air Traffic Organization (ATO), shared the sentiment.