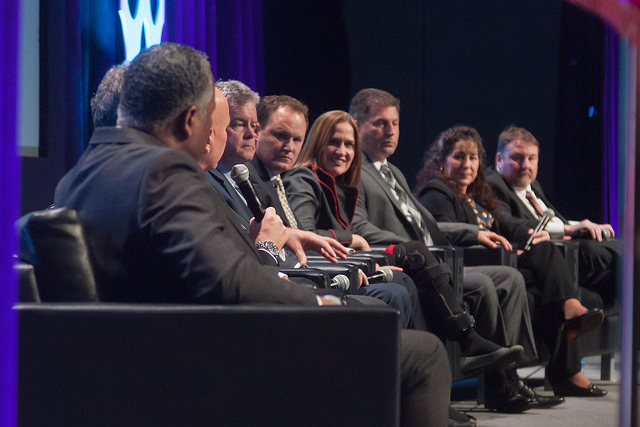 NextGen initiatives are modernizing the National Airspace System (NAS) with new, safe, and effective equipment and procedures. The program seeks to apply all available data and research to develop new technologies to modernize the NAS while maintaining the highest standard of safety.

On the first day of Communicating For Safety 2017, a panel of distinguished experts gave their perspectives on the challenges of implementing multiple new technologies and procedures in the NAS, the impact on facilities, and how — through collaboration on NextGen initiatives — we can all advance the NAS.

In addition to explaining how successful collaboration has been in implementing NextGen, panelists went into the process behind it.

Woods explained that when looking for common interests on NextGen programs, it depends on the situation. He said that as you look down the long list of projects and programs, everyone is fulfilling all of the tasks associated with their individual program, but don’t always realize how much it touches other areas of NextGen.

“It’s a very difficult thing to keep track of all the moving parts,” Woods said. “One of the things that makes this work is how we are able to sit down and talk about these implementation challenges.”

Woods continued, explaining that one of the prime challenges is deciding when to implement training procedures. Though Data Communications (Data Comm) is a success, training programs came late in the game. Woods said it’s important to learn from that when looking at every NextGen program moving forward.

Ullmann echoed the challenge of finding common ground, saying there can be 150-to-160 programs and projects going on at a time. Only through working together and looking outside of their individual roles can leaders decide what should take priority over something else.

Adcock explained one way they addressed that challenge with Data Comm was to get everyone involved.

“We saw an issue that needed to be addressed with training,” Adcock said. “There was a time-sensitive issue associated with it.”

Because of the time-sensitivity, it became a priority and that line of business was addressed on a telcon with 18-to-20 subject matter experts collaborating on how to resolve the issue. They were able to modify the training, validate it, and get it out into the field without affecting the implementation timeline due to their successful collaboration.

Smith explained that identifying the timing and execution of all these competing priorities can be tough. She said that it takes humans thinking intentionally about them, working out how they will make sense to different audiences they need to transfer knowledge and abilities to, and how all of that lines up with the cost and schedule of acquisition programs currently underway becomes a science project of sorts.

“We have to keep talking through and be mindful of competing priorities because it’s all very important in getting to the next generation of the NAS,” Smith said.

Woods explained it always comes down to functionality, cost, and schedule.

“From the NATCA perspective, we’re about functionality,” said Woods. “That’s the beauty of the relationship.”

The beauty he describes is being able to sit in a room and talk about everything else that might be a priority for your counterparts. He said you don’t want to strip the program down to the point where controllers can’t use it. The collaborative process enables everyone to prioritize what they’re doing, how they’re doing, and discuss why that’s important. That way, the equipment is not only cost-effective and on time, but actually works when placed into the operational environment.

Reynolds explained that it’s about identifying the process and solution. If they are able to get all stakeholders to agree on what is the best solution, they can then discuss how to implement that solution.

“With multiple projects competing to be in a single baseline, how does that all come together?” Reynolds said. “ If we don’t have those conversations, that’s just not going to happen.”

Dr. Creasap cited the path to success on these programs includes ruthless attention to detail and ruthless responsibility.

“We have to be watching every little detail, constantly communicating, and have accountability for those decisions,” Dr. Creasap explained.

Biggio explained that one of the greatest implementation procedures has been for safety. He said that problem solving comes from this type of communication and collaboration so teams can roll up their sleeves and get things done, but that’s not to say there aren’t still challenges when everyone collaborates.

MacDonald explained that unpredictable funding causes many of the engineers and technicians who work on and implement new equipment to be stuck at the office with paperwork, which is not optimal.

“Another challenge is space,” MacDonald said. “When new equipment comes in, we have to still maintain the old equipment 24/7, 365 days a year. Then, we’re tasked to find space for the new equipment and keep both systems running.”

Turner echoed the reality of that challenge. He explained that one-third of the Region X workforce are technicians who work out of 80 different project locations. There are also about 1,300 engineers working on those projects. He said getting all of them to work collaboratively can be a challenge, but one they are willing to face.

“Just last year, we did something monumental in engineering services,” Turner said. “We were able to commission three major towers in a 45-day period. We could not have done that without collaboration.”

Woods explained that a lot of things look good on paper, but once it’s in the field, that’s where the interaction is really important. He said that once you learn how to communicate back and forth between controllers, engineers, and program managers, you are able to understand each other and you’ll be more successful.

“Those are three very different languages,” Woods said. “Once we’re able to understand each other and look at what we’re trying to accomplish, that’s where we’ve been able to do some really good things out there. You’ve got to understand how it’s built, how it’s managed, and how it’s used.”

The panel discussed that the problem is how they are going to introduce all of this new technology safely into the NAS. What will the presentation look like? What is it going to offer? They said it takes a lot of coordination and a lot of data collection.

McKelligan said the amount of coordination on Metroplex initiatives is immense.

“The amount of work these teams complete and the way facilities work — I’m very proud of that accomplishment,” McKelligan said.

One way facilities and teams coordinate projects like Metroplex is through the collection of data. Woods and Hansen discussed that teams can talk all they want but if they don’t have data to support it, it’s less effective.

“That’s one of the things that has really improved,” said Woods. “The reporting mechanisms have also improved. Now it’s not just about one project or program, but about how it affects three other ones that we might not be looking at the data for and realizing that it will be affected.”

Woods said it’s important the Air Traffic Safety Action Program (ATSAP) allows us to file these things because they can then tell a story when it involves multiple systems across multiple lines of business.

“If they don’t have the information, they go with their gut and what they know,” said Hansen.

He said that informing people working on NextGen by reporting through ATSAP, or whatever mechanism you have, equips them with accurate information to move forward on.

Turner agreed, noting that without collaboration and data collection, many NextGen accomplishments simply could not have been accomplished.

“To be able to maintain the NAS as we bring new systems online, to be able to do what we’ve done is a success and something to be extremely proud of and not take lightly,” Turner said.