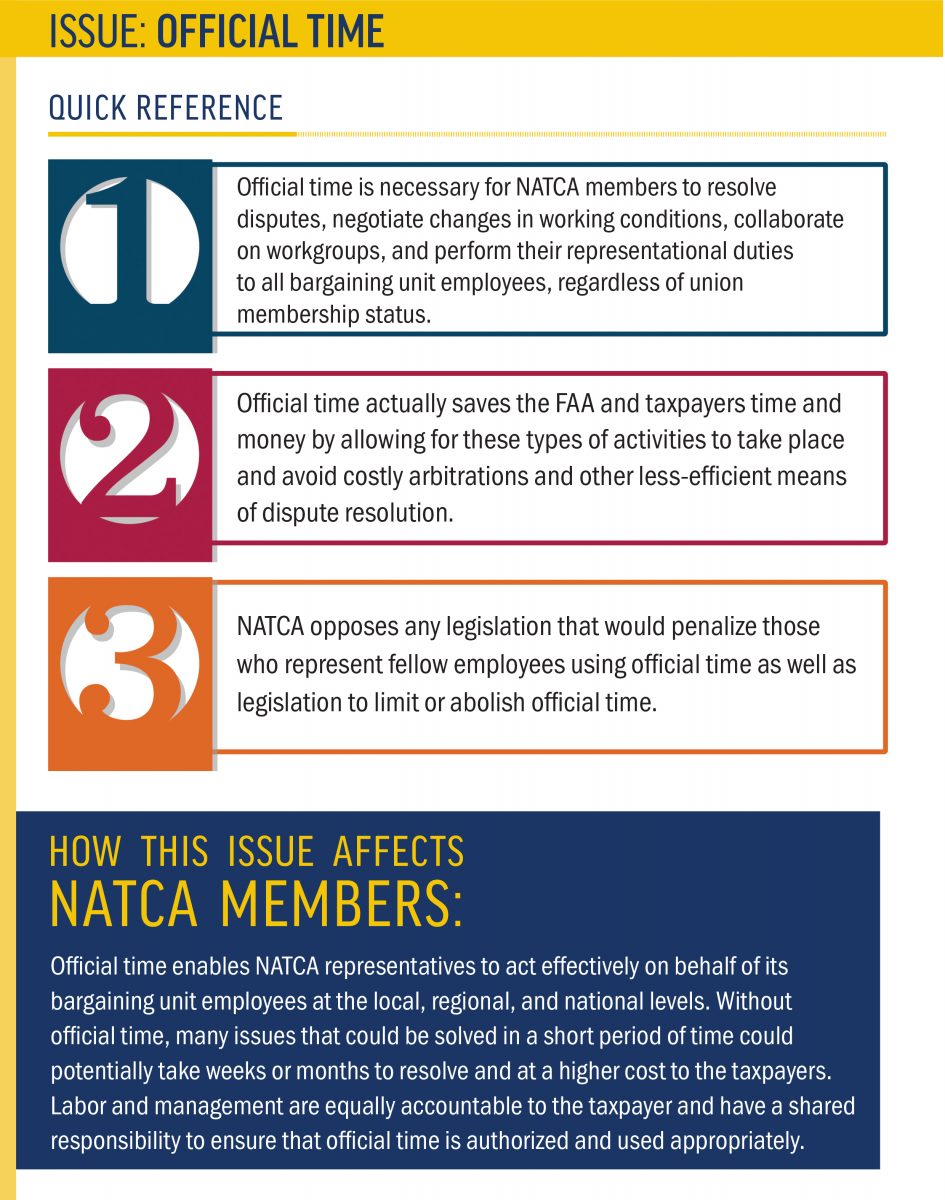 ISSUE: Official time at the FAA is paid time that employee-representatives may use to resolve disputes, negotiate changes in working conditions, and to collaborate on workgroups that implement new procedures, such as NextGen. It facilitates meetings and collaboration that save the FAA and taxpayers time and money by allowing the parties to avoid costly arbitrations and other less-efficient means of dispute resolution. Labor and management are equally accountable to the taxpayer and have a shared responsibility to ensure that official time is authorized and used appropriately. Yet, there is a misperception by some members of Congress that official time is an abused program and that eliminating official time would save the government money.

Each year we see legislation, or amendments to legislation, that would stifle or outright eliminate the use of official time by government employees, including those at the FAA. In 2017, legislation already has been introduced in the House of Representatives attacking official time.

MESSAGE: Official time is necessary for NATCA members to perform their representational duties owed to all bargaining unit employees, regardless of union membership status. It is an especially important tool now, as America’s air traffic control system is being modernized. The elimination of official time would prevent NATCA members from working with the FAA on the technology and procedures that are vital to the success of NextGen, and would hinder collaboration and progress of these and other important initiatives. NATCA opposes any legislation that attacks official time, including the Official Time Reform Act of 2017 (H.R. 1364).

BACKGROUND: Congress established official time by law to ensure that all workers receive fair representation. Yet, legislation continues to be introduced to limit or abolish official time. The House of Representatives had two recorded votes on the issue in the past four years. NATCA helped defeat these efforts both times. These victories were a direct result of NATCA’s efforts to educate members of Congress and their staffs at the local and national levels.

The 115th Congress is no different. Legislation already has been introduced that would attack official time if enacted into law. H.R. 1364 was recently introduced by Rep. Jody Hice (R-GA). This bill would harm the important work that is being done by NATCA and the FAA on NextGen and other programs that require collaboration — programs that are vital to the safety and efficiency of the National Airspace System.

H.R. 1364 also would reduce retirement benefits for federal employees, including NATCA representatives, for simply performing their representational duties. Such an attack would seriously constrain NATCA’s ability to use official time for its many critical, legitimate purposes.

NATCA members MAY use official time to:

NATCA members MAY NOT use official time to:

As stated above, despite being allowed under the law, NATCA members also do not engage in lobbying activities — such as this NATCA in Washington event — while on official time.