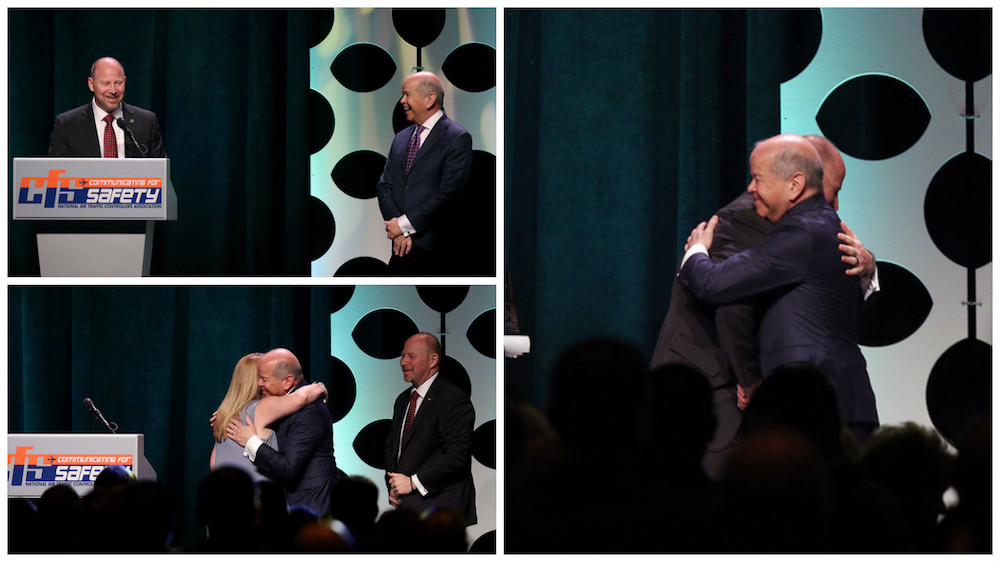 NATCA created the Sentinel of Safety Award as a way to honor aviation leaders outside NATCA who have displayed outstanding achievement in the advancement of aviation safety. The award is presented annually at NATCA’s Communicating for Safety conference and was renamed the James L. Oberstar Sentinel of Safety Award in honor of the tireless advocate for aviation, air traffic control, and NATCA during his tenure in Congress and as the Chairman of the House Transportation and Infrastructure Committee. This year, NATCA President Paul Rinaldi presented the award to two dedicated aviation professionals, FAA Administrator Michael Huerta and NTSB member Christopher Hart.

Rinaldi explained that under Huerta’s term as Administrator, the relationship between NATCA and the FAA has come far. Rinaldi said that we have built a culture of collaboration that has enabled us to make progress on NextGen, strengthen the workforce at the local and regional levels as well as at FAA headquarters, and ultimately enhance the safety of the National Airspace System (NAS).

Administrator Huerta is the first Administrator to come to the Archie League Medal of Safety awards banquet, and he has attended every year he has been Deputy Administrator, Acting Administrator, or Administrator. Rinaldi said this embodies Huerta’s commitment to the work that aviation safety professionals do each and every day.

“I can’t really say that I can take credit for the amazing things that we’ve accomplished because we have done so much together,” said Huerta. “Our ability to go so many years with this incredible safety record is due to the work of all of you.”

Huerta said that on any given day, thousands of people are getting on airplanes and they are thinking about a lot of things — whether the bag is going make it, what the TSA line is like, will that kid ever shut up — but if you think about it, they’re not worrying about whether it’s safe.

“It’s gotten to the point where the public doesn’t even think about it — but we know that we have to be vigilant each and every day to ensure the system we love so much is the safest it can possibly be,” Huerta said. “Thank you for all that you do and thank you for this. It means a great deal to me.”

Rinaldi also presented the James L. Oberstar Sentinel of Safety award to another pillar of the aviation community, former NTSB chairman and member Christopher Hart. Rinaldi commended his dedication to the safety of not only the NAS, but all modes of transportation.

Rinaldi explained that Hart fully embraces a collaborative approach and understands that in order to improve safety, the workforce must be engaged at the earliest stage possible.

“Yes I played a role in it, but the people who really did it was the staff,” said Hart. “The wonderful, competent, proud, professional staff. They did all the work and I got all the credit.”

Hart concluded by thanking all of the aviation safety professionals who have helped him safeguard the NAS and that he looks forward to continuing their positive and growing relationship.