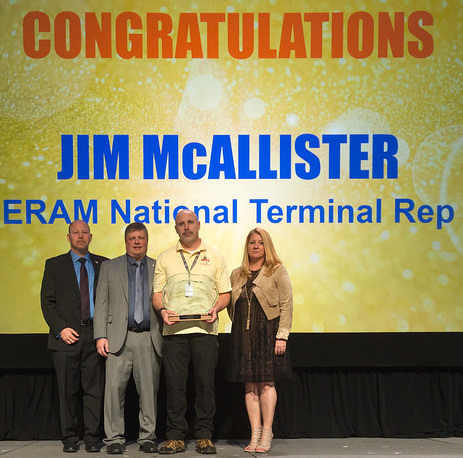 NATCA President Paul Rinaldi, Executive Vice President Trish Gilbert, and Safety Committee Chair Steve Hansen presented Jim McAllister (Potomac TRACON) with the Steve Hansen Safety Advocate Award at Communicating For Safety in March. Named for the Chairman of the NATCA National Safety Committee, the award is presented to a NATCA member who has made extraordinary achievements and has worked tirelessly on NATCA’s behalf to be a leader in furthering the cause of aviation safety.

While each winner has contributed their skills, dedication, and work ethic in different ways, with varying areas of expertise, there is one thing that ties them all together: they are all passionate about safety and aviation. 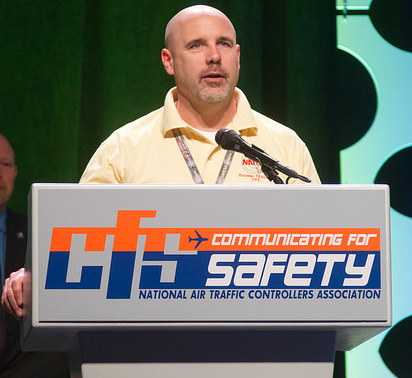 McAllister has been a controller for 26 years. After joining the agency in 1991, he was hired into Washington National and later moved to Potomac TRACON where he currently works. Rinaldi explained that he played a pivotal role in equipping the TRACON with state-of-the-art equipment as a staunch NATCA advocate.

When McAllister first got involved in En Route Automation Modernization (ERAM), the program was lacking the terminal automation needed to sync of the system. Rinaldi said that in 2009, McAllister was asked to become the lead in the terminal area of ERAM where he led the effort to deliver the most up-to-date equipment available to controllers in the operating environment.

Following his successful tenure with ERAM, he was the natural choice to lead when Data Comm was going through similar problems in 2015.

“Time after time we’ve asked this gentlemen to help us with the safety of the system,” said Rinaldi. “He has proven to be true NATCA for the last 26 years and not only is he respected among NATCA members, but among all of FAA and industry.”

Rinaldi said NATCA tapped into McAllister’s talent and passion, his ability to help set up a training program, and putting a team together to deploy Data Comm on time and under budget. His focus, Rinaldi added, led to remarkable success.

“I have no words,” said McAllister upon accepting the award. “It’s been a truly awesome career and awesome ride. It’s always been about you guys (the workforce) and making sure you have the best equipment and the best tools in the NAS to work with. Love you guys.”