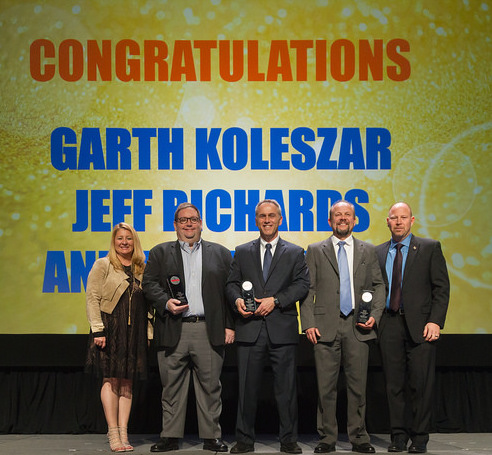 Last year, NATCA created a new award to honor Union teams, workgroups, and committees that exemplify the true collective NATCA spirit of working together to achieve greatness. The 2016 Slate Book contract team was the first group NATCA honored with this new Team Excellence Award for their efforts negotiating that Collective Bargaining Agreement (CBA). This year at Communicating For Safety, NATCA honored founding members of the Union’s Professional Standards Program Garth Koleszar, Andy Marosvari, and Jeff Richards for their efforts in launching and growing the Professional Standards Program.

“The team receiving this award today helped take NATCA to a new level,” said Executive Vice President Trish Gilbert during the presentation at Communicating for Safety 2017. She added that the trio is committed and dedicated to making sure professionalism is at the forefront of everything we do.

Gilbert explained that in 2009, the Professional Standards program was first codified in the Red Book collective bargaining agreement. In 2010, reps from FAA and NATCA met in Cleveland to begin drafting the program.

Gilbert said the three are some of the most dedicated NATCAvists. “They have committed their entire careers to better this Union and to highlight and strengthen our professionalism.”

Koleszar is a founding member of the Professional Standards Committee. He is a 26-year veteran of Los Angeles Center. In 2012, he was honored with a Tim Haines Memorial Award.

Marosvari is a controller at Boise Tower/TRACON and is also a founding member of the Professional Standards Committee. He served on NATCA’s Safety Committee from 2009-2016 as Northwest Mountain Chair and in 2013, received the Steve Hansen Safety Advocate award. He was also honored with a Tim Haines memorial award in 2016.

Richards has been a controller at Chicago Center for 26 years, and served as FacRep from 2006-2012. He has served as the Great Lakes Alternate Regional Vice President since 2006 and has been the national lead on fatigue mitigation since its inception. He is also a founding member of the Professional Standards Committee. In 2016, he was honored with a Tim Haines Memorial Award.

Richards spoke on the group’s behalf and explained that there is not enough he could say about Marosvari and Koleszar to fully describe his experience working alongside them. With all three reaching retirement age in the next couple of years, he explained his hopes for the program’s future.

“We need to get new blood into the program for its longevity,” Richards said, explaining that they were excited for new members to join the committee and share new ideas.