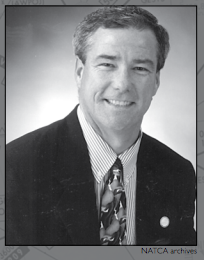 Former NATCA President John Carr grew up in the Washington, D.C. area delivering The Washington Post as a paper boy. He then spent four years as a Navy controller in Corpus Christi, Texas, and aboard the USS Eisenhower, including a 152-day deployment at sea without a port call — a record that stood for 22 years. He turned down a job offer from the Federal Aviation Administration (FAA) a few days after the Professional Air Traffic Controllers Organization (PATCO) strike, but reconsidered when his brother counseled him on his career options.

Five months later, he joined the Agency and soon certified as a controller at Kansas City Tower/TRACON (MCI), where he organized his facility and became the local’s first FacRep. Carr worked for most of his career at Chicago TRACON (C90) where he held all elected NATCA positions throughout his tenure. He also worked at Cleveland Tower/TRACON (CLE). The joy of serving in a variety of positions solidified his dedication to the Union. He became more deeply involved as a Facility Training Instructor and by serving on the 1998 NATCA contract team after then-President Barry Krasner asked him to participate.

“We wanted a greater voice because we knew what happened when we didn’t have one,” he said of his time on the contract team.

Elections and highly political environments did not intimidate the young man, who would earn the nickname Johnny “the Bull” Carr as he began to spread his wings within the Union. His father had been a career civil servant and not a fan of unions, often regarding his son’s NATCA-related efforts as merely a hobby. This characterization did not slow Carr down. He ran and was elected twice to serve as NATCA’s fourth president, from 2000-2006.

The passion that got him elected stems from an overriding concern for others and a sense of fairness and empathy tempered with intolerance for reckless authority.

Unlike NATCA’s previous presidents, Carr’s election to the top office was not predicated on National Executive Board experience. Instead, he made the leap using his articulate flair and involvement with the 1998 contract team. Taking the reins of the maturing Union, Carr proved adept at framing public debate on key issues while strengthening communication with the membership and management.

“(Carr) always comes with the notion of problem-solving,” she said. “I don’t think there is anyone better in Washington at capturing the public’s attention. He’s galvanizing. He says the right thing in the right way. It’s great fun to watch him.”

The trade publication Aviation Daily echoed that sentiment when it named Carr the second most-influential person in aviation for 2001. The honor was bestowed in recognition of controllers’ efforts through the tragic events of September 11, but also underscored the great strides NATCA had made since its inception 14 years earlier.

Today, Carr continues to be a leader in aviation. Though he is now retired from air traffic control, he has spent the last decade as an outspoken advocate for controllers, the flying public, and air traffic safety. He now serves as the Executive Vice President of the Americas Region for the International Federation of Air Traffic Controllers’ Associations (IFATCA).