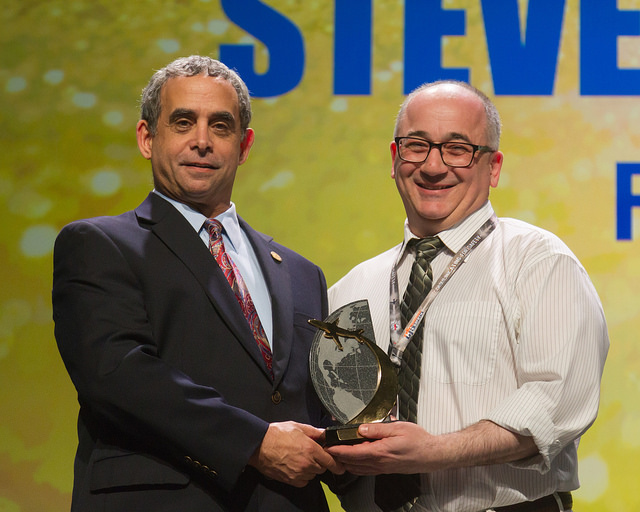 For the first time at Communicating For Safety, NATCA honored safety work done by a member ofRegion X with the new Region X Commitment to Safety Award. This is a new award that will be given annually to a Region X member who has shown a profound dedication to ensuring the safety of the National Airspace System (NAS). The award is peer-nominated, and any Region X member in good standing can be nominated for work done in their role as an aviation safety professional.

In 2011, a small airplane directorate invited Steve Rosenfeld to take part in pre-decisional involvement on the Title 14 Code of Federal Regulations (CFR) Part 23 reorganization of the aviation rule-making committee. Rosenfeld advised the group on behalf of NATCA because of his extensive expertise and knowledge in airworthiness regulations and procedures.

For this effort, he developed official engineering safety input, questions and comments for the main body of the rule-making committee, and organized and submitted all other comments generated from NATCA Air Certification bargaining unit employees.

His efforts improved safety for general aviation (GA) aircraft by initiating a move from prescriptive to performance-based regulations, and developing an internationally recognized and standardized means of compliance. Through the rule-making decisions on these efforts, there were discussions in the industry for the next five years. Rosenfeld led efforts to develop an official NATCA response to the FAA rule-making committee by working with the National Safety Committee. He worked with NATCA to provide comments to the concurrent European rule-making effort. His efforts served as part of a broader push to harmonize the FAA with procedures abroad in certification regulation — a monumental undertaking worthy of praise.

“We thank Steve for his long-term dedication to aviation safety and for being a strong NATCA leader through these various collaborative efforts,” said Region X Regional Vice President Mike MacDonald.

The new performance-based Part 23 changes are now published and will be effective August 30, 2017, for use by GA industry. Rosenfeld continues to demonstrate his dedication to the safety of the NAS as NATCA lead on the American Society for Testing and Materials, the GA Aircraft Standards Committee, and on other industry civil airworthiness authorities in the FAA. Rosenfeld also serves as the NATCA Rep for the Small Airplane Directorate Part 23 training development effort to bring real-time training to NATCA Certification Safety Engineers, and helping bridge the gap between old and new certification philosophies.